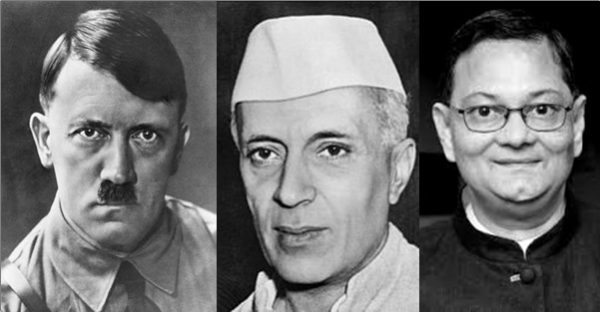 History textbooks sing glories about Jawaharlal Nehru. We have grown up reading all the good things about him. We have grown up offering him tributes on 14th November every year as ‘Children’s Day. Is he really an icon of national stature? Is he really worthy to be a representation of nationalism? No! He harmed the nation the big way. He committed many blunders. The country is still paying the price for his blunders. Why is he then glorified? History needs to be rewritten!

Chandra Kumar Bose, grandnephew of Netaji Subhash Chandra Bose, tweeted few months ago, “Nehru a man who betrayed the nation by working as a British stooge! He was the 1st Prime Minister of divided dominion of India reporting to the British crown. Facts of history. The Youth of 21st India must know the true history of India’s freedom struggle and the role of traitors.” 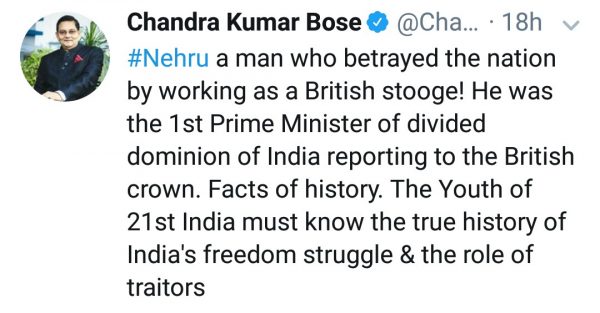 The whole-hearted support and endorsement by Mahatma Gandhi led to Nehru’s attainment of position as the 1st Prime Minister of independent India. The British never wanted India to be united. ‘Divide and rule’ was their policy; they advised Nehru that states and kingdoms not willing to accede to the Indian union should not be forced to do so. It was Sardar Patel who forced all the 550 small princes and zamindars to surrender and accede to Independent India. He even went to the extent of using military force. The united India we witness today from the east to west and north to south are all because of the efforts by Patel. Had Patel not taken stern action to unite India, Nehru would have broken India into bits and parts!

It was because of Nehru that led to the Kashmir problem. The Kashmir issue has not yet been resolved. A number of problems cropped up including mass killing and exodus of Kashmiri Pandits, terrorism, unrest, and the list goes on. Nehru refused the offer for permanent membership in the UN and he said that he would not subscribe to the United Nations without China. He gave full support to China for Permanent Membership in the United Nations Security Council.

In early 1950s, when China made claims of certain Indian territories, Nehru remained calm giving reason that ‘not a single blade of grass grows there’. He failed to control the 1962 Indo-China war leading to martyrdom of many Indian soldiers. The India-China border issues still persist. Had the issue been nipped at the bud by Nehru, this border issue problem would have been solved.

Chandra Kumar Bose also tweeted, “It’s time to correctly analyse the contribution of so called leaders like Nehru! Once that is done certain national icons projected by paid historians would look like villains.” 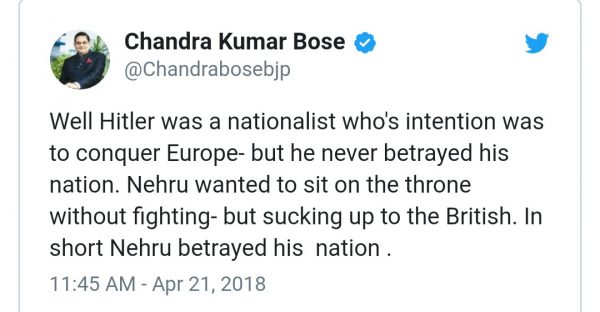 Chandra Bose tweeted further, “I’m not supporting Hitler-of course he was a devil- but he was not fraudulent like Nehru – who in the guise of being a nationalist was actually a British lackey. The British tortured & killed millions of Indians over a period of 200 years – but Nehru wined & dined with them!” 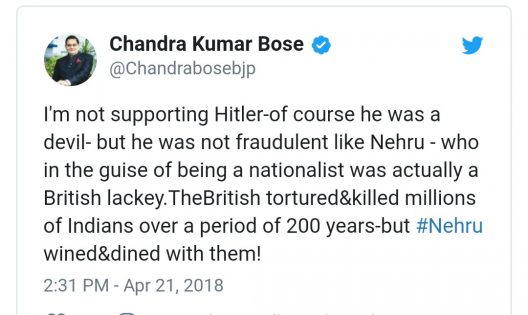 Nehru spied on the family of Subhas Chandra Bose for nearly 20 years from 1948 to 1968, revealed by two declassified Intelligence Bureau (IB) documents. Nehru deployed officials for intercepting and copying letters sent by Bose’s family members besides followed the family on their foreign trips. Why?

In this context, Anuj Dhar, an author and former journalist tweeted with a photograph, “This is @Chandrabosebjp’s father (arrow) behind his uncle Subhas Bose; and this is Pt Nehru’s order. How’d you feel if your father was tailed like this? What would Congress do? In 1991, Rajiv Gandhi pulled down the Chandra Shekhar Govt over charges of snooping.” 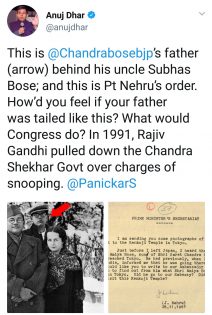 An expanded pic of the above letter by Nehru: 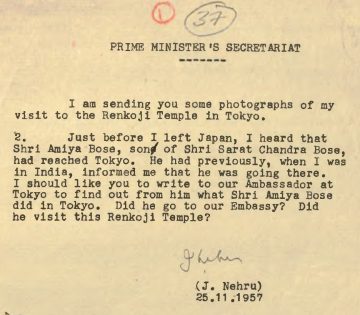 Nehru did not allow officers from ‘Azad Hind’ Sena of Netaji Bose to join Indian army. Instead, he designated them as traitors. Why? He was a stooge of the British, ruling India according to the whims and caprices of the British. He did not leave British slavery. There are countless other reasons that prove Nehru did harm the nation.