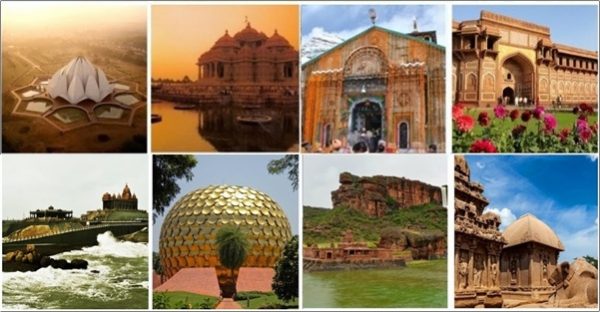 The ‘break and divide India’ influence of the British continues to plague the country even today. Distorted historical records which they have left behind and which find a prominent place in our History text books continue to influence minds, generation after generation. And for some time, the Aryan Dravidian myth in the garb of the North South divide has been gaining momentum!

A recent news report by The Hindu titled ‘North India must be persuaded to tread path of south: Chidambaram’, reads thus: “Hailing the southern States, barring Karnataka, for stopping the BJP juggernaut from rolling into the region, senior Congress leader and former Union Minister P. Chidambaram has called upon the newly elected Members of Parliament to prevail upon their counterparts in the north to tread the path of south to protect secular and democratic values.” Here Chidambaram is indirectly dividing the North from the South in the name of politics. So, for political gains, anything can be said!

It is not only the ‘Break India’ forces in India but also Pakistan that has been involved in breaking India on the basis of the North South theory. The neighboring country proposed a United States of South India in an article published by Pakistan Defence in May 2017. The article points, ‘What then is the solution when democratically rendered justifications, pleas, complaints, negotiations and bargains have failed to strike a chord for decades?’. 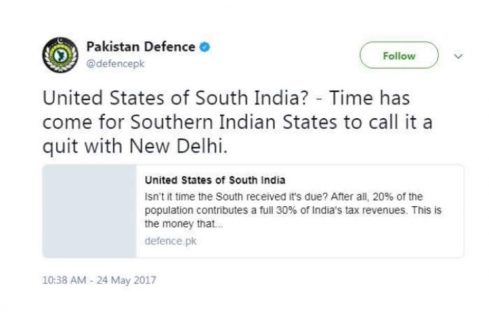 With relief operations in full swing and materials and aid pouring in from different parts of the country in the wake of the floods in Kerala, ‘Break India’ forces started furthering their political agenda with even few journalists joining this race. Dividing and breaking India on North South parameters, thus sowing the seeds of division, had been their topic of tweets and discussions.

The Print in its April 24, 2018 article published its headline thus – ‘For rich South India, the rest of the country is a tax burden’ and carried this sub headline, ‘India’s two halves have strongly disparate interests, demands and expectations. Healing those growing divisions will be the constant task of future leaders.’ This old news article was picked by journalist Shekhar Gupta in the wake of the recent Kerala floods to further his agenda. 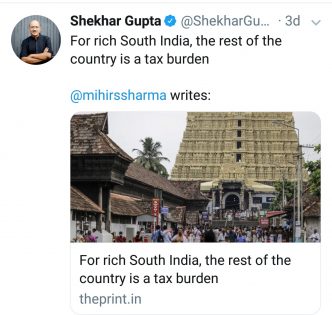 And then there was an article by TheNewsMinute dated July 14, 2016 with the headlines – ‘United States of South India: Can a Southern collective get us a better deal from Delhi?’. It carried the sub headline: ‘The politics of the South has made it economically comparable to Hong Kong, while the atavistic politics of the North has dropped it far down the scales’. This old article was picked up and tweeted by MK Venu, founding Editor of thewire.in. He tweeted thus: 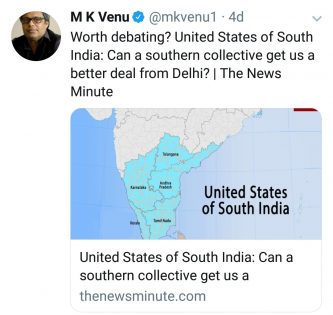 Time and again a false narrative called Aryan Dravidian theory, or to be precise, the North South divide has been created to break the very backbone of the country. And it has been proved time and again that the Aryan and Dravidian theories are false. Do you know there is a genetic relationship between the citizens of the country from the north and the south? Centre for Cellular and Molecular Biology (CCMB) has proved there is no genetic difference since last 20-30,000 years.

Researchers from Harvard Medical School, Harvard School of Public Health, Broad Institute of Harvard and MIT in collaboration with indigenous scientists from Centre for Cellular and Molecular Biology (CCMB) submitted a research paper on ancestral Indian populations. This report was published in the Times of India. One of the co-authors of the paper was Lalji Singh, former director of CCMB. This paper refutes the north-south divide. It proves the Aryan Dravidian divide to be a myth.

The Times of India report starts with these lines, ‘The great Indian divide along north-south lines now stands blurred. A pathbreaking study by Harvard and indigenous researchers on ancestral Indian populations says there is a genetic relationship between all Indians and more importantly, the hitherto believed “fact” that Aryans and Dravidians signify the ancestry of north and south Indians might after all, be a myth.’

As per the report, “the study analysed 500,000 genetic markers across the genomes of 132 individuals from 25 diverse groups from 13 states. All the individuals were from six-language families….it was impossible to distinguish between castes and tribes since their genetics proved they were not systematically different.”

And then stories were created around the Aryan Migration theory further linking it with the Aryan-Dravidian. Megasthenes, the Greek ambassador to India around 600 BC (date as per Vedveer Arya’s book Chronology of Ancient India) in his book Indika wrote that India, being of enormous size when taken as a whole, is peopled by races both numerous and diverse, of which not even one was originally of foreign descent, but all were evidently indigenous.

There have also been numerous references in the Vedas and our ancient scriptures besides researches over the years corroborating a connection of the North South population.

Divide and rule! This was the mantra adopted by the British to break India. And now ‘Break India’ forces are diligently following this mantra. It is time the sons and daughters of the soil rub their eyes to draw example from our rich past where no such North South divide existed. Do you know in 748 AD, combined forces of the north and the south led by Gurjar Pratihar king Nag Bhat I badly defeated the Arab forces in Rajasthan? The citizens should unite and fight against the ‘Break India’ forces. It is time India awakes from her deep slumber before it is already too late. Jai Hind!