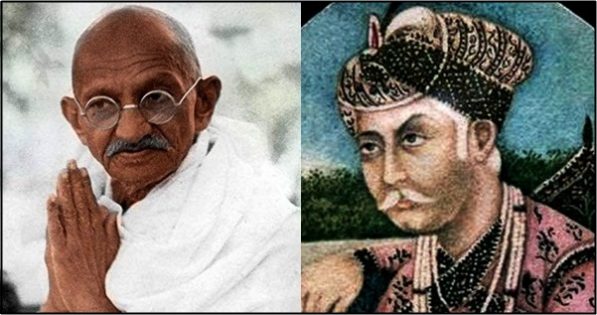 One may admire Mr. Markendya Katju for the same reason that one does the fool of the emperor’s court of olden times. Both have the uncanny ability to utter half truths without realizing it and one that can make the point across to the public.

In the India of today, very few dare to say even the half truths. The liberals and fanatics in our midst have put a lock on everyone’s tongue and whoever tries to break it is called non- secular, a label worse than living death.

Mr. Katju has said that he thinks Gandhi shouldn’t be the father of the nation, anymore. No surprises here. But he hasn’t stopped at that and taken this argument further and given this coveted title to Akbar who lived four centuries ago. If he had stopped after saying the first half, nobody would have blinked an eyelid. But he has touched a hornet’s nest. The reason is simple.

Choosing a father of the nation has been far more difficult than choosing a mother. The mother we always had, anointed long ago by the people who lives in their heart except a few, ones who refuse to stand for the national anthem or sing ‘Vande Mataram’. The picture of ‘Bharat Mata’ evokes a thousand emotions.

The father of the nation on the other hand evokes no such emotion. I suspect that the eminent judge has discovered it and is the reason for the present debate. Despite the father staring at us from every banknote, from memorials, we continue to be corrupt and violent increasing it day by day. Why does his persona not stop us?

Why is it that no Indian ever thinks of doing any sacrifice for the nation thinking of him? Who does he inspire today? For our army men who face bullets everyday, can they afford to think of him on the battlefield? Would he have been on Abhinandan’s mind as he faced torture in Pakistan? Now that we are the fourth largest military power and can hit terrorists across the border, what has happened to the last vestiges of his philosophy? Has he truly failed us unlike the mother who still inspires us to fight till the last breath?

I once heard an Indian army veteran tell me that if our average soldier keeps Gandhi as an idol in his mind, we will lose our country in no time.

Has the present father of the nation become so redundant that we are forced to think of a medieval Emperor as his replacement? Does the answer also not lie in seeing our fathers as warriors first? Are they both similar in some way?

Unlike the Mahatma, the Emperor never experimented with sexual lust. He gave full reign to his desires, to murdering those who disagreed with him, to his sexual appetites from his conquest of ‘infidel’ women. Can we not choose our ‘father of the nation’ as someone who doesn’t have bizarre sexual fantasies and perversions?

It goes without saying that the competition may get rough and we Indians may have to face another round of guilt.

It was Subhash Chandra Bose, the prodigal son of Gandhi, who gave him the title ‘father of the nation’ and the father didn’t object. It came to him when the father too needed it badly to restore his image, his Quit India movement having failed, no leader listening to him, nor the British. A true spiritual seeker he was, he accepted it. Bose played a masterstroke thinking if and when he entered India with his army, the father might melt and bless him, irony be damned.

The learned judge sees Akbar as the new father of the nation since he brought all religions of India under one roof. His adulation is infantile. So much so that he forgets that in medieval times one was forced to go to the emperor’s court and agree to him. If he didn’t the choice was death. Maharana Pratap or the 40000 people of Chittor who were slaughtered would tell you that he showed no mercy. His din-e-elahi then was an old formula for the propagation of a religion that sees others as infidels and talks of killing them if they don’t convert. Sounds similar to what happened in 8th century Arabia and in twentieth century India, with names like Vincent Ram or Radha Mary getting commoner? Get the infidels under the fold, under one roof by seducing them first. They won’t realize how and when they gave in sad but true.

Akbar didn’t realize his dream wouldn’t happen because the entire Hindu civilization to be converted was an older one and far more resilient.

The Indian ‘father’, unlike the ‘mother’, symbolically remains an ambivalent and split figure. Torn between his desires and the needs of his children, he remains indecisive. Many a times he got weighed down by trying to be politically correct. India of today is what it is due to the eternal Bharat Mata and her compassion, the ‘father’ having messed up repeatedly. Bharat Mata is sufficient to guide her sons and daughters holding them in her fold. I vouch for that. The father can watch from a distance for the time being, no offence meant.

In my novel The Infidel Next Door, the fathers of Aditya and Anwar fail leading them to explore their conscience for answers while the mother guides and holds. The father is even jealous unable to answer questions. A reader even asked me why I wrote of ‘memory as a mother’?

Should we then not leave the post for father of nation vacant for the time being? There are many who are illustrious and there will be many more in future. But I believe, the true father of nation will emerge who will teach us to be a warrior to defend our dharma, who will not fast to appease the enemy who tries to kill his children or go into a world of bizarre sexual fantasies. He will be the one who will take us towards realizing our deepest civilizational values like a true warrior. We may have missed him in the past but shouldn’t do it in future.