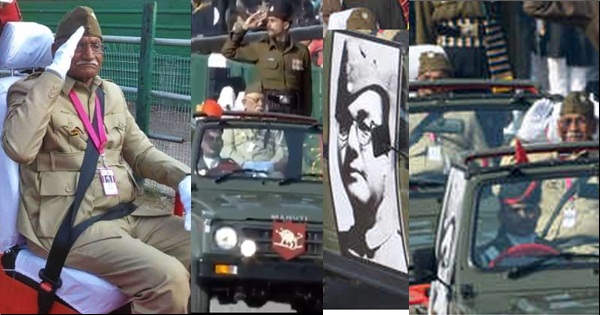 Can we say that when the Indian National Army soldiers finally walked down the Rajpath on this year’s Republic Day Parade, an ungrateful nation woke up finally from its slumber to show it has begun to care?

Did we undo a historical injustice through this display bringing an end to an era based on a lie?

Will it become a moment of truth for our nation in the eyes of our future generation?

The moment I am talking about was hardly majestic. It had no pomp, no grandeur and looked almost banal and insignificant in display. Four veterans of the war led by Subhash Chandra Bose, who looked pale beyond years and had crossed ninety, sat in open jeeps and passed through the parade. They didn’t walk those steps that marched to the tune of ‘Dilli Chalo’, the steps which once were not deterred by the greatest military power of the day, which wouldn’t stop even when on the verge of death. These steps which once marched with the most blood curling call ever given on the Indian soil called ‘Give me blood and I will give freedom’. They were perhaps not strong enough to stand today. But what stood tall, in my opinion today was the conscience of India.

Were these soldiers aware that the parade they passed had been possible because of them and their twenty six thousand brothers and sisters who perished and many of whose graves lie scattered all over the continent unsung and unacknowledged by an ungrateful nation? The contrast also couldn’t have been more stark. Many of the tableaus were around Gandhi, the man who threw Bose out as party president and realized that his ‘Quit India’ movement had been a total failure and it was actually the fear created by the INA that made the British to leave India and not his spinning wheel.

Were we then a nation without a conscience, a people who for seventy years didn’t look at our own heroes and their stories of martyrdom? And now that the moment of redemption has finally come to us, do we rise and celebrate our moment of truth? I pray we do.

Shouldn’t the INA have walked down on the first Republic Day Parade? To a society steeped in slavery for a thousand years, would it not have shown that we as a nation can fight and haven’t forgotten how to acknowledge the martyrdom of our soldiers? Doesn’t a mature society show gratitude to the soldiers who gave her freedom?

The truth is that we didn’t for seventy years. What excuse do we have for that? Is it difficult to understand why? Our first Prime Minister Nehru, who became so by default, would he not have looked farcical if they had marched past with him at the podium taking the salute? Would it not have shown the hypocrisy of what he was? Of the one who was trying to thrust a lie upon his people, was it to hide this lie uppermost on his mind? A lie that was nourished and maintained for the last seventy years, will it be finally said to have reached its demise today?

But I believe this deception started even earlier. It started with the speech that Nehru gave at midnight when British left India. The speech is marked by three distinct characteristics. It shows that India’s freedom just happened, a lack of gratitude to the ones who sacrificed their lives and to not give credit to the millions who gave their lives for the freedom of the country. To the world listening to that speech it would appear that India’s freedom just happened, it was a matter of destiny and the British were benevolent creatures who left of their own accord and were not forced to.

In his tryst with destiny speech when India got her independence, Nehru did not mention the contribution of INA or about the countless revolutionaries who were hanged. He didn’t mention the Naval Revolt. He did not mention the twenty six thousand soldiers who sacrificed their lives in the war with British. Would it have ruined the ambiance of the occasion and upset the likes of Lord Mountbatten and others who would have found it distasteful to hear that the British were finally beaten?

I am reminded here of Golda Meir, the woman who went to ask for money to USA for building Israel’s army when their country came into being. She many times couldn’t speak because she remembered only her fellow brothers and sisters, cold and hungry fighting at the border, guarding their country with no weapons and bare hands. All she could say was how precious their freedom was and that they would fight till the last drop of blood. Same was the spirit of the soldiers of INA.

It doesn’t take much of imagination to say why Nehru didn’t mention those twenty six thousand soldiers. Why he found it impossible to mention the revolutionaries tortured in Andaman to death, their bones broken by repeated beatings, their skin covered in blood due to torture and those who waited for their hanging. These images, however gory, grotesque and brutal are the true images of our freedom struggle that should have found a place in our collective consciousness long ago. They haven’t till today. Will we then wait for another seventy years? Why can’t we have a picture of Andaman on our Currency notes? Why is it what has guided our imagination has been that of a man spinning a wheel that tells every Indian child our freedom came with a charkha, not with blood? Had our forefathers honored those who gave us freedom then, would not a different country with values of nationalism and honesty be the one we imbibed.

Why weren’t the INA soldiers glorified as heroes when they returned? Why didn’t we feel proud of them for seventy years and held them at arm’s length? Why didn’t we protest when they were sidelined and humiliated? In country after country the returning soldiers are glorified and their valor made into a legend for every child to imbibe as part of a national consciousness. Was there something missing in us as people that failed to see this?

In my career as a psychologist, I met a soldier’s family from INA. They suffered from what we would today diagnose as suffering from PTSD or post traumatic stress disorder. It didn’t come from the war experiences as much as the humiliation they faced when they came back. The soldier shared about his colleagues who suffered from long term depression because they were not welcomed back by a leadership and a nation that did not acknowledge their struggle. They felt a further humiliation when they were thought of as not worthy of being soldiers to be taken back in the Indian army. Their children, even grandchildren suffered from shame and depression and rarely could talk of their fathers as brave soldiers and had to hide it. To me the saddest part could be that the children fought a lone battle telling everyone their fathers were not mercenaries hired to fight but were the first soldiers who kindled the flame of freedom for our country.

Isn’t it time we come together and reverse this injustice?

Did Nehru’s narrative of sidelining the contribution of INA led to a ‘public disengagement’ for many generations with a distorted understanding of our freedom struggle? Was its greatest casualty the truth that could bind us as a nation, as people lost in that lie? I believe as a society we need to answer this question.

What values would have the INA brought to the Indian army if they had been allowed to join by Nehru? I believe they would have added a dimension to the army of that time through their nationalism that would have percolated down to every layer of society across India and added to the national identity, a sense of unity that we missed and one that is felt today in being witness to numerous fragmented identities. Why didn’t our leaders of at time let it happen?

Nehru’s speech at midnight omitted out on the staggering cost that the soldiers and people of India paid to bring about freedom from the British. The added glorification of non-violence added a layer that put a lid on that truth. The Indian people were insulated from the horror that was the freedom struggle that the INA and the revolutionaries went through. To believe that a nation got their freedom and won against a power that was as brutal and violent as it could be may one day be seen as sheer grandiosity, delusional and a self destructive journey led by a leader rooted in narcissism.

Why did such a large number of Indian people believe and still continue to believe in such a falsehood that they got their freedom through non-violence? Indians were neither callous, nor insensitive to believe in such a lie. Was it because of the horror of partition, the abstraction of Gandhi’s teachings that created a numb environment to believe it to be so? Did the events of the world further add to that like the horror of the WWII, the dropping of the atomic bomb on Japan and create such a deadening impact on the mind to imagine in the invincibility of a power higher than violence. But I believe like all untruths of history that have crumbled, the time for this myth too has come to go and I pray this paves the way to a new reality that is honest and grateful.

A last word for the man who made it possible for us. It must not have been not for him to change the wheels of history. A small change but giant in its impact is what I would call it. But the message through this and many similar acts he initiates is as clear as a blue sky. The clouds are moving away and we have a right to know our past, our history as it happened and not as one based on lies. To me that may herald the dawn of a new era.