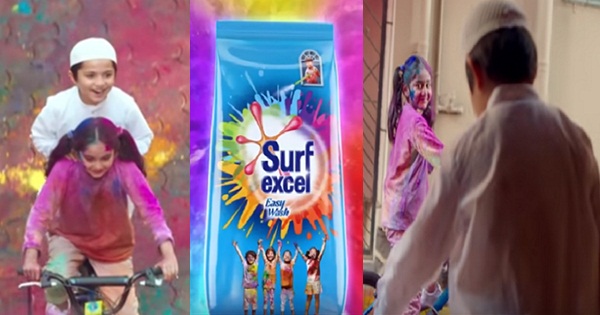 It was a friend who called up saying she had cried after seeing the surf excel ad on Holi and felt very angry that people were saying nasty things about it and asking for surf excel to be boycotted. “It is so touching and healing, don’t you agree?” she asked me.

I had to say I didn’t agree with her. Puzzled she asked me why I think so over such a heartfelt ad involving two children. Since I was in no mood to have a conversation, here is my understanding describing my feelings.

To me the ad on Holi divides and perpetuates the notion of ‘the other’ in a subtle and indirect way.

Toni Morrison, the famous Black writer once wrote that there is so much benefit in creating and sustaining ‘the other’ that it is imperative to learn the advantages and discover what may be the socio political benefits of repudiating those advantages.

In her story ‘The Artificial Nigger’ Flannery O’Connor wrote how and why Blacks are so vital to White definition of humanity. In that process, she wrote the word ‘Nigger’ is used constantly even when it is totally unnecessary. The story is about education and the use of the word is a large part for the education of the White boy to know he is distinct and separate from him and the rest of the world. The insistence and excessive use of the word indicates how important the notion, symbol and separateness of Blackness is to the identity of the White man.

The surf excel ad on Holi does the same to perfection replacing the word with the dress.

A boy in white is created, a child apparently one who is not like other children but entirely separate who has nothing in common with the ones playing Holi. He wears white unlike other children who wear clothes that are full of color. The boy is someone who doesn’t want to dirty himself just like other children are doing, who are having fun by throwing colors on each other. He is pristine pure and white, way different from other children who doesn’t believe in participating in a festival that other children are having fun with. The game on the other hand is universal, requires no entry rule for anyone to join and has no religious symbols attached. He keeps himself separate from them, even rolling his trousers is a distinct sign showing he is different and won’t be drawn into, one that keeps his distinctive identity separate.

Why doesn’t this boy join to play with the other children? Doesn’t he want to? Children are naturally spontaneous, playful and playing with colors is their natural passion. I can only imagine he has been told not to join and play with the others because they belong to another faith and his white dress is a reminder of that for him and for all others, children’s propensity to play and spontaneity be thrown to the wind. This is called indoctrination, telling a child to be different and act different from others. How would it be, if it was shown in the advertisement that all children are wearing different dresses, come from different sources to intermingle and jump with joy and become playful throwing colors? Why no takers for that? I doubt. In modern times is it difficult in a ‘secular’ India to conceive that for liberal admen and women?

The message is for children and is loud and clear. Amongst you one child is different because of his dress and his religious beliefs and you should be guilty of thinking of trying to have fun with him. You should be ashamed of thinking him as one of your own. Period. The process of creating ‘the other’ begins from there.

Who is the persecutor here? Obviously the children throwing color and having fun, in this case the majority. Who is the victim? The lone boy in white. Who is the rescuer? Isn’t it obvious? What about the parents of the boy who sent him wearing a white dress on a day of festival? Why are they not to be seen? Why don’t they tell him to join and have fun like other children, I wonder? And I wonder, where in India will a young girl take a young boy on her bicycle to read namaz? Can someone educate me? Wonder what the Maulavi sahib would have to say to that?

Lastly, about the girl in the advertisement. She is a Hindu, shown as understanding, caring and an epitome of compassion who rescues the boy. The boy is a Muslim, clearly separate marked by his clothing and mannerisms, damning the universality that by and large all children want to have fun, are the same and the differences between them because of religion or color of skin are vanishing. By the end of the advertisement, the innocence of children, universal and who forget all differences is erased and an alternate universe is brought in marked by who you are and who I am.

In my book The Infidel Next Door more than one editor asked me to make Aditya a persecutor and not a victim and instead make Zeba and Anwar as victims. This, they said, was almost for the same reason as the one shown in the advertisement.

Jean Paul Sartre once famously said, ‘the hell is by creating ‘the other’. In the above advertisement on Holi, ‘the other’ has been created through by a dress, by making one act different which has no need to and who has to be saved from colors that are dirty. The daag this time refers to something other than acche. I pray that those like my friend who had tears in their eyes on seeing the advertisement and calling it healing think it over once again.