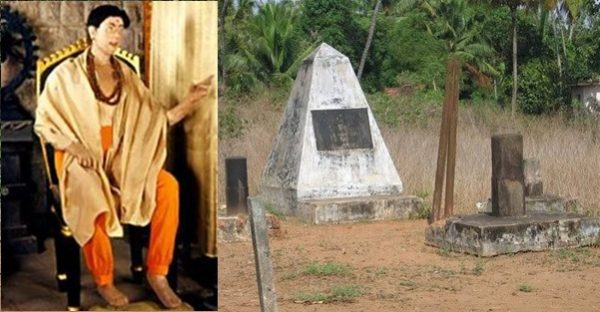 There were trade relations between India and neighboring countries long before the birth of Prophet Muhammad. There are numerous historical references that prove existence of trade relations between Arabia and India since ancient times. The major trade links were the ports and coastal Malabar served as a major link between the ports of India and Southeast Asia. With the advent of Islam, Arab merchants started propagating the new religion wherever they went.

According to a popular fable from Muslim sources of Kerala, Cheraman Perumal Juma Masjid was built in Kodangallur (Mahodayapuram) in 629 CE when Mohammad was alive. A King of Mahodayapuram, Cheraman Perumal went to Mecca and met Mohammad. He converted to Islam but died on return journey. Interestingly, Christians also claimed that Cheraman Perumal was close to St. Thomas Christians settled in Kodangallur and converted to Christianity. They also claim that Perumal died in the house of Apostle St. Thomas in Mylapore and not in Mecca. Let us examine the sources that refer to this fable.

Duarte Barbosa, a Portuguese traveler, states “More than 600 years before of our time (around 1510 CE), there was a King named Chirimay Perumal, whose capital was a popular port for pepper trade. The Moors who came for trade converted the King to Islam. He went to Mecca in their company and died either there or on his way back; the Malabar people never saw their king again.

Sheikh Zainuddin, the author of Tahafat-ul-Mujahidin (written in latter half of 16th century) gives the similar account but he clearly states that this incident did not happen during the lifetime of the Prophet but two centuries later.

Joas de Barros (1610 CE), a Portuguese writer, gives another version of the story. According to him, the Moors were religious fanatics and converted the King to Islam. The King moved to Calicut and Moors made him believe that he has to go to Mecca. Interestingly, Barros mentions that the king was Sarama Perumal and reigned 612 years before we landed in India. If we take 1498 CE, the date works out to be 886 CE.

According to an inscription found at the Masjid, it was built in 1124 CE, two years after the disappearance of Cheraman Rama Kulashekhara.

William Logan, who was a Scottish officer of the Madras Civil Service under the British Government, wrote in detail about the historical aspect of Malabar. He mentioned that a friend of him came from Arabia and stated that a Tomb of Abdul Rahman Samiri is located on the outskirts of Zaphar, in Oman and dated in Hijra 212. But all historians rejected it because there is no credible information about this tomb till date.

According to oral account of Cheraman Masjid, Cheraman Perumal was converted to Islam and changed his name to Tajuddin. He went to Mecca and met Prophet Mohammad and died there. After the death of Cheraman Perumal at Mecca, Malik ibn Dinar came to Kerala with letters written by Cheraman. The Kings of Kerala honoured him and gave permission to construct Masjids in different places of Kerala. According to the legend, Saraf Ibn Malik, Malik Ibn Dinar, Malik Ibn Habib, Ibn Malik and their wives and friends were responsible for establishing the first mosques at Kodungallur, Kollam (in North, not Quilon), Maravi (Matayi), Fakanur, Manjarur (Mangalore), Kanjirakuttu (Kasergode), Jarfattan (Karippat), Dahfattan (Dharmatam), Fandarina (Pantalayani Kollam) and Caliyath (Chaliyam near Beypore).

Periyapuranam, which is much older than the oral tradition or the medieval text of Keralolpatti, mentions that when it was time for the Perumal’s friend and Saivite saint Sundaramurti to leave Tiruvanjikulam (Cranganore), the Perumal also followed him to Kailasa.

According to Keralolpathi, Cheraman Perumal was upset having reigned for a long period the land which was the gift of Parasurama and wanted to make amends. The Perumals were supposed to rule for 12 years and make way for the next one; this one ruled for 36 years.

Keralotpatti also mentions that the Perumal in whose reign this successful war is said to have taken place, was appointed by as the ruler of Kerala by Anegundi Krishnadeva Raya.

All these versions clearly indicate the following points:

In all probability, one Perumal who was appointed by Krishnadeva Raya was converted to Islam in second half of 9th century.

Periyapuranam is the oldest source and mentions that Cheraman Perumal went to Kailash and disappeared. He was undoubtedly the King of early Kulashekhara dynasty (200 BC – 436 AD). Keralotpatti also mentions that Cheraman Perumal was upset having reigned for a long period the land which was the gift of Parasurama and wanted to make amends. The Perumals were supposed to rule for 12 years and make way for the next one; this one ruled for 36 years. Therefore, the Cheraman Perumal of Periyapuranam and Keralotpatti was an earlier king and he cannot be identified with the Perumal of 9th century.

Keralotpatti also mentions that Krishnadeva Raya appointed a Perumal in whose reign the successful war is said to have taken place. Vijayanagara Empire was established in the second half of the 7th century. The great King Krishnadeva Raya I reigned around 829 CE to 863 CE. Most probably, Krishnadeva Raya appointed one of his officials as governor in Northern Kerala. After the war between Ramaraya and Persian kings of Bijapur, Ahmednagar and Golkonda, Persian Kings took control over certain areas of Vijayanagara Empire. The governor appointed by Krishnadeva Raya had to work under the Persian Sultans. In all probability, he might have converted to Islam and changed his name to Tajuddin.  He went to Mecca and died there at the end of 9th century. Malik ibn Dinar arrived in Kerala with the letters of Tajuddin and visited the court of the later Kulashekhara kings of Mahodayapuram. They permitted Malik ibn Dinar to construct a Masjid at the end of 9th century. The same Masjid might have undergone repairs around 1124 AD as mentioned in the inscription found at Masjid.

Therefore, Cheraman Perumal, the King of early Kulashekhara dynasty did not convert to Islam but he went to Kailash along with Sundaramurti probably in 4th century. In fact, a petty governor of Vijayanagara empire had to accept Islam under compulsion at the end of 9th century and went to Mecca. The later Kulashekhara kings of Mahodayapuram only gave permission to Malik ibn Dinar for constructing a Masjid in Kodangallur.

(Note: According to the book The Chronology of Ancient India: Victim of Concoctions and Distortions, by Vedveer Arya, there were three kings named Krishna Raya during the period of Vijayanagara Empire from 650-1646 CE. They were:

1. Krishnadeva Raya I : He reigned around 830-870 CE. He was the greatest king among the three Krishna Rayas. He wrote the famous treatise “Amuktamalyada” in Telugu. The great Telugu poet Allasani Peddanna “Andhra Kavita Pitamaha” was in his court. Telugu text “Rayavachakam” is all about this Krishnadeva Raya I.

3. Krishnadeva Raya III : He reigned around 1509-1530 CE. A great king, he finds mention in accounts of foreign travellers.)