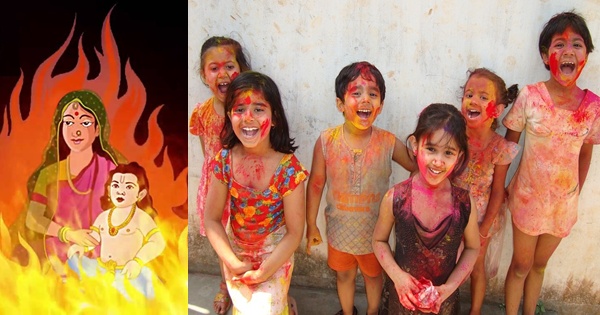 At the onset of spring, colors fill our lives. While Nature is all geared up to drape herself in a colorful attire, the Festival of Colors lend a  joyous milieu. Holi symbolizes the victory of good over evil. The Bhagavat Puran describes about how Hiranyakashipu was killed by Narasimha, the avatar of Vishnu, and how his evil sister Holika was burnt in the holy fire while trying to kill Prahlad, Vishnu’s follower and Hiranyakashipu’s son, by deceit.

Hiranyakashipu received a boon from Brahma after which he conquered all the three worlds of heaven, earth and the netherworld. He enforced a law that everybody should worship him. Whoever did not worship him was put to death. To quote few lines from The Eighth Avatar (Krishn Trilogy Book 1) by Manoshi Sinha, “His little son Prahlad did not obey his orders. Instead, he started worshipping Lord Vishnu. This enraged Hiranyakashipu. Even his wife worshipped no other deities but her husband. Despite his repeat orders, Prahlad refused to accept him as God and instead worshipped Lord Vishnu with more fervor and highest devotion. This infuriated Hiranyakashipu further. He planned the death of his own son. He ordered his soldiers to throw him down from a high hill. The soldiers threw him down from the top of a mountain, yet Prahlad did not die. Lord Vishnu came to his rescue.” 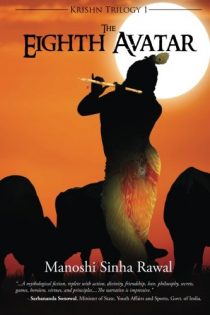 Click here for more info about The Eighth Avatar.

Further quoting from The Eighth Avatar, “Hiranyakashipu made several other attempts to kill his son, but in vain. The Asur king then requested his sister Holika to help him get rid of his son Prahlad. Holika had a boon that she could walk or stand unharmed in fire. Both brother and sister planned something new. According to the plan, Holika would enter the fire with her nephew Prahlad. However, Holika forgot a condition of the boon that she would not perish in any fire only if she entered it alone or caught up in flames alone. Accordingly, as planned, Hiranyakashipu lit a huge bonfire. Holika carried Prahlad in her arms and entered the fire. Holika got burnt and died instantly, but Prahlad remained unharmed. When the fire extinguished itself, Hiranyakashipu was surprised to find his sister dead and Prahlad alive, unharmed. His son was uttering the name of Lord Vishnu with his eyes closed.”

Holi is celebrated for 2 days. The first is called Holika Dhan or Choti Holi in which people gather around a bonfire in the evening to offer their prayers to the holy fire. This bonfire is a re-enactment of the Prahlad-Holika story. And the next day is called Holi or Rangwali Holi or Dhulendi. Click here to listen to Hori Thumris.

Here are top five places that are worth visiting during this time.

If you are out on a trip during Holi, do visit Mathura and Vrindavan. Mathura is where Lord Krishna was born and Vrindavan is where he grew up.

A week long celebration in Banke Bihari temple is the centre of attraction while the Krishna’s Janmasthan holds a renowned show a week before Holi. A colorful procession also takes place on the day of Choti Holi which starts at the Vishram Ghat and ends at the Holi Gate.

It is a village in Uttar Pradesh, which is very near to Mathura, where the famous LathMar Holi is celebrated around a week before Holi. On this day the women folk of Barsana beat up men who travel from Nadgaon, Mathura for the festival. It’s an old ritual that signifies the beating of Lord Krishna and his friends who went to tease Radha and her sakhis. The men are, though, allowed to protect themselves with shields. 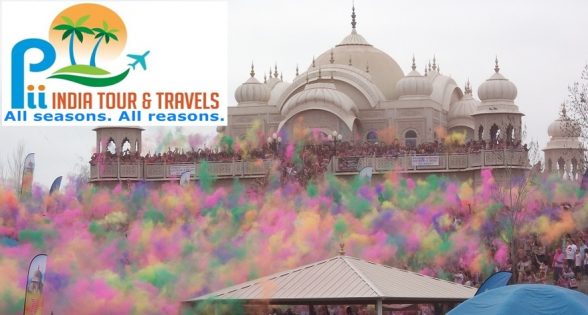 The next day starts with the celebrations on the streets and everywhere around but by afternoon it is moved to the homes by a loud siren making the festival safer and merrier. The festivities are followed by the intake of Bhang or Thandai as an offering to Lord Shiva.

Holi being one of the major festivals of Rajasthan; it is celebrated with much pomp. After the celebration of Holika Dhawan on the night of Choti Holi, the next day  a majestic procession is carried out from the Royal Palace to the Manek Chowk which includes elephants, horses, camels all decked up and decorated in colorful attires and jewels while people dance through the street decked up in the same way. It’s a visual treat to the eyes.

If one wants to visit an offbeat place for the celebrations then Manipur should also be on the list. The centuries old Yaosang festival, which is identified with Holi, is celebrated on the full moon day of the Phalgun month and lasts for a 6 days. On the evening of the full moon a hut made of hay, bamboo, twigs etc. is burnt to start the celebrations.

Not just colors but sports activities are carried out all throughout the state during the first 5 days. Devotees dressed in traditional yellow and white turbans sing and play gulal in front of the Krishna temple. On the last day, devotees take out a procession towards the temple in the capital city Imphal. The festival is also famous for Thabal Chongba, a Manipuri dance where males dance with the females in circles in the moonlight.

How Holi is Played at Braj Bhumi: A Pictorial Representation