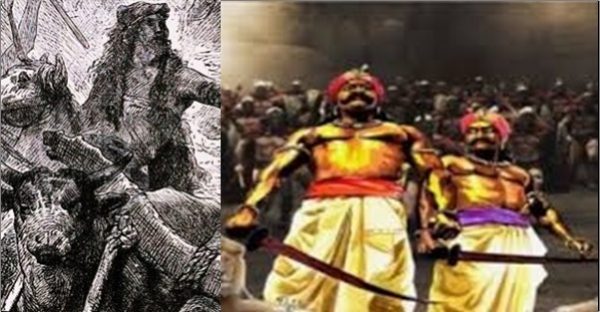 The lofty ideals of ‘unity in diversity’ as cherished in our constitution were in fact pledged for the entire diversity of India. This axiom was neither reserved for one particular region of India, nor it is meant to play politics with it.

Regardless, today, the liberals have taken this paradigm to a distasteful direction to fit their own agenda, in order to overcome the ‘nationalism’ as nationalism is not in their blood or thoughts for the ‘Tukde Tukde gang’. This disloyal approach of the liberals would cause serious division in our society and may lead to disorder soon if left unchecked and unchallenged.

Off late, the liberals are seriously into the game of dividing India into Aryan and Dravidian sects with utmost audacity. The liberals efforts to divide our own people would even shame the British. They are trigger happy now, with their newfound, Neo-Ambedkarism, which is, contrary to the popular belief of its non-violent doctrine, is today rioting on the streets undisputed and unchallenged. The liberal’s had no other option, but to buttress this new found violence perpetrated by the newly christened section of the society i.e ‘marginalised section’ under many “excuses”. The bloody-protests that were masterminded by the urban-Naxals, and witnessed in BJP Ruling states in January this year, was accepted and legitimised by the liberals without contempt. And they conveniently labelled it as ‘struggle’.

Now there exist two kinds of ‘malice’ and two kinds of solidarity efforts to counter them. Whenever the right-wing questions the increasing animosity of the religious minorities towards the nation and their fellow majority Hindus, it is dubbed as ‘hate’. Whenever the right-wing rightly questions the hypocrisy and bias of the Liberals on issues of sensitive religious beliefs, it is again dubbed as ‘hate’.

So, the hatred of Right-wing groups and Hindus by our mainstream media is going to stay for some more years in our system, intensifying the Indian polity and Indian community for good or bad. It could be hate of Hindus, hate of Muslims or hate of Aryans/Dravidians. Because as of now, there are no signs of the Right-wing organisations consolidating themselves to resonate nationalism through mainstream media and till then we have to hear and bear the JNU saga for some more time.

In the long passage of human history, we have rightly perceived Aristotle’s logic, scientific thinking and metaphysics. We have rightly perceived the teachings of Vedas, Upanishads and Sad Darsana’s. We have fairly hailed Darwin’s evolution theory, acclaimed Karl Marx Social justice and rational thinking but eventually ended up on the laps of religious bigotry. The 21st Century man, with all his 3000 yrs of wisdom, abruptly fell at the feet of bigotry of Islam. Today thousands of years of acquired wisdom has become redundant and forsaken. The Islam-apology has been rising almost in all continents as a barrier to protect the bigotry of Islam. The global Secular evangelists have further this cause so severely, now the Islam apology’ has become a state obligation, and any criticism of it is dubbed as ‘hate’. So, the ‘hate’ marvel has imposed a one-way entry rule, and such a traffic regulation though illegal under the constitution was legitimised by the Islamic apologist liberals in India very mindfully.

In the post-Independent India, nationalism was more severely stalked by the liberals and Leftist bigots under the apology of restraining the ‘Hindutva’ tsunami. However, this sham of liberals has reached an alarming stage now. The liberals have now switched over to Aryan-Dravidian divide, which they think is the most effective tool to contain Hindutva nationalists in today’s given political environment. Having tried and failed with ‘hate’ and ‘Intolerance’ smear campaign against PM Modi, the liberals are now contracting an unusual propaganda of ‘Aryan-Dravidian’ theory to challenge the BJP’s nationalism mantra and it’s grand plans to make inroads into Tamil Nadu and Andhra Pradesh. It may be kept in mind, that the very proponents of ‘Aryan Invasion theory’ are now down with their own admission of its fallacy. Yet, our liberals are still finding some fodder in it to keep feasting on it, to keep the society divided to accomplish their political and religious ends.

The liberal media’s unanimous Jaya Ho’ to the central theme of the movie ‘Kaala’ and their wholehearted worship of the protagonist in black, is part of this break-India game. Let us review this growing defiance against the nation by the so-called ‘marginalised section of India’ and the liberal’s true intentions behind these protests.

The attack of media on ‘Padmavat’ protest proved the Liberals’ antagonism against ‘upper caste Hindus’.

A careful review of the war like situation that was created by the movie Padmavat’ would confirm the fact that the liberals and our MS Media were up in arms against the ‘other castes’ of Hindus. The media was throughout virulent against the ‘other caste’ (meaning the upper caste Hindus). The TV News channels targetted the ‘Rajput’ community and ridiculed them for their protest against Padmavat movie. They then cited the prevalent ‘misogynic’ social system in Rajasthan to counter the Karni Sena’s defence of ‘Rajputana pride’. They then started a counter campaign against the protestors i.e Karni Sena, by highlighting and revealing the remorseful status of ‘woman’ in Rajasthan. This campaign ran for several days and other left lenient news channels too picked up the story and lasted it for several days targeting and ridiculing the ‘Rajput community’ against their protest of ‘Padmavat’ movie. However, their bias was apparently exposed. Their ‘agenda’ driven campaign was finally bared.

If we take up another war like situation that was prevalent in another part of the country, which provided the same opportunity and same fodder to the media to take on the warring community but yet, was deliberately snubbed by the media. Because that ‘community’ was in their protective list. The media was duty bound to protect them. It was the ‘pro-Jallikattu’ protests that took place on January 2017 in Tamil Nadu. This protest was also known as ‘Thai Puratchi’ referring to the most revered month of Tamils. There is a saying in Tamil, ‘Thai pirandaal Vazhi pirakkum’, meaning the beginning of the month ‘Thai ‘ will bring success’. So the pro-Jallikattu protest was in all likeliness a display of solidarity for Tamil culture. It was also openly cited to defend the ‘Jallikattu’ in the Supreme Court against the PETA petition. So, the media resolutely stood in defence of Tamils and Tamil culture then, without posing any uncomfortable questions about it. We Indians are equally proud of Tamil Culture and its cherished History.

But wonder, why the media did not recollect the prevalent ills of Tamil Society like FGM, female infanticide, child marriages etc and felt appropriate to disgrace and disdain the Tamils, on the same logical ‘whataboutery” grounds like they adopted in countering the Rajputs in ‘Padmavat’ movie protests? This was a nasty display of double standards of the liberal media. This again demonstrates the liberal’s outrageous agenda of dividing the Hindu society into:

1) The ‘Dalits, BC, OBC and religious minorities (this group is known as ‘marginalised section of the society) and
2) The Other Castes.

And the notion was that the media should always resist the ‘Other castes of Hindus and keep supporting the Dalits and others, without regards to facts and fairness.

The marginalised section of the society is the grouping of Hindu Dalits and religious minorities, which is seemingly an idiosyncratic union. Yet it is quite a large chunk of the population that constitutes nearly 40 %. This queer combination of Abrahamic religious followers of Indian origin and native Indic people of Hinduism cannot go in tandem. This is indeed an odd alliance from the cultural and religious aspect. The liberal’s view to unite this odd-mixture is highly idiotic, and may only serve an instant interim political gain for the ‘break India forces.

The liberal’s intention is obviously not earnest and a real commitment to their welfare. Their sole aim is to weaken the unity of ‘Hindus’ by setting them against the rest of the Hindus (‘the other castes’).

What would be the Liberal’s game plan once this group is perfectly set against the core Hindus? Are they aiming an armed struggle and to expand the armed Naxal insurgency in a big way to overthrow the largest Democracy in the world? If this is true, then it is highly undesirable and eccentric too. The liberalists are well aware that our country is not only a large democracy but a powerful one with the world’s 4th largest and powerful Army guarding the nation against threats from all directions. Any armed insurgency even if it is designed on a mass scale would be crushed in no time. A judiciously regulated restraint that is what in reality is holding the Government not to set the Indian military in crushing the armed insurgency of the Naxals. Hence Armed insurgency cannot succeed in India under any circumstances, and if the need arises, in no time the Indian Army can wipe out the insurgency.

By now the nation has clearly seized of the evil designs of ‘the anti-development’ riots orchestrated by various Leftist groups in India and in particular in Tamil Nadu. The Christian and Dravidian outfits have joined hands with the national level leftist groups.  Anti Jallikattu protests, the recent anti-Sterlite plant protest in Thoothukudi, anti-Kudamkulam Nuclear plant protests, protests against the international container transhipment terminal, Thoothukudi outer harbour development, the ONGC project at Kathiramangalam and the recent protests against the proposed Chennai-Salem Green Express Highway are all grand designs to destabilise India.

The anti-development groups behind these protests are threatening national unity and security, their methodology in mobilising the protestors is nefarious. These groups are ‘using’ gullible marginalised section of the society as a ‘human shield’ who unfortunately would die in police firings while lining up in front, and their educated elite ‘think tank’ would be hiding behind these innocent people, safeguarding their ‘skin’ and their adorable family.
However such dubious acts are bound to surface one day. This is exactly what happened recently in Thoothukudi, TN, when several fishermen family members of the unfortunate victims of police firing filed a petition before the authorities, pointing their fingers to a group of dubious Lawyers, who pushed them in the violent ring.

Their desperate effort was to portray the Central Government at Delhi, and the Sterlite company, as ‘Aryan archetype ‘perpetrators and the Tamils are the Dravidian archetype victims.

Here, the Aryan-Dravidian dogma is going to be a shot-in-the-arm for the agitating posse in Tamil Nadu. for some time in the coming days. The powerful Chrisitan Missionaries are happily associating with these groups, as such a divide in the Hindu society would only help their ‘conversion business’ to thrive. Above all, the mobilisation of such pro-LTTE groups witnessed in the month of May this year in Tamil Nadu is clear indication of LTTE sympathisers regrouping as 17th May was the remembering day of late LTTE Tiger Velupillai Prabhakaran. Besides a number of Tamil News Channels floated by Christian Missionaries are busy propagating anti-Hindu and anti-BJP hate non-stop. Evangelist Mohan Lazarus is running amok in Tamil Nadu, and spreading ‘hate’ relentlessly and unchecked.

There is a shady connection. Urban Naxals+JNU+Leftis Political Parties+Missionaries+Islamic outfits+Dalits protests+Naxal Insurgency+Dravidian outfits +Islamic terror outfits. This Python’s head is in Tamil Nadu, the tail is in Jammu and Kashmir to be accurate.

The more the ‘Right’ is timid, the more this Python remain active and waiting to swallow this huge nation.

This article was first published at myvoice.opindia.com.