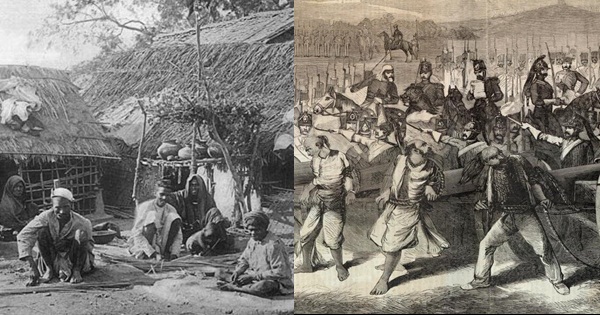 Creation of modern Caste System was done for hunting the different Hindu communities in pieces, one by one,  for conversion in the fold of Christianity. They became hugely successful. It were Portuguese bigot uneducated Christians,  sponsored agents of Kings, Nobles and Churches who succeeded to touch the India sea coasts in 1498. Wascodegama was their leader. They captured the land of Gova.

They used term ‘Caste’ most prevalent in Europe and sanctioned legally to compartmentalize the society in Nobels and serfdom, for different communities of India. Caste term originally comes from Portuguese and Latin word ‘Casta’.

The travellers from Europe who came in contact of India in last five hundred years used word Caste and Tribes for Varnas. Tevernier and Vernier, two eminent travellers used the same terms to describe four Varnas of Hindu system. They are treated as historians and Indologists by Historians. Till date, though these two terms which have been most often used by constitutional social and political systems and powers, they have not been able to define for what these terms actually exist.

Rest of the Europeans who followed Portuguese to India used this word ‘caste’ expensively to define social, manufacturing and service communities of India.

When Britons took over Bengal in 1757, most of their first 50 years were spent on plundering, stealing, and destroying the Indian manufacturers and states. They were able to establish  themselves politically in this time period. In 1799 after defeating Tipu Sultan, Dr Francis Hamilton Buchanan was given duty of surveying territory under East India company about Indian agriculture and agri based economy and manufacturing along with technical details of manufacturing of various types of fabrics, leather material, iron steel and so many other things. He noted minute details of various technologies used and came out with a 3 volume book in 1807 titled as Journey from Madras through the Countries of Mysore Canara and Malabar. This was published by East India company and thereby its important documentation for Economic Historians of World. This book gives detailed description of social framework of Hindu society of that time.

Buchanan classified Hindu Society in 122 Castes/Trades which is first official classification of its kind. He used word “Pure Caste” for Varna, and word “Caste” for “Jati or Jat”.

In next fifty years, Briton pirates continued to plunder and money drain of India along with destruction of Indian manufacturing trade and industry, which resulted in massive unemployment, poverty, hunger and de industrialization.

It resulted in massive revolt in 1857 by Indian Hindus and Muslims, which was suppressed by middle age brutality, obviously with the help of few Indian native kings.

After 1858, policy of Britons changed drastically. They used various methods to redescribe Indian History and society as per their political, and Evangelical requirements.

New researches and Historians like Paul Baroch Angus Madison, Amiya Baghachi, have concluded that India was shareholder of more than 24% of Word GDP till 1750 from 0 AD, while British and USA combined were merely shareholders of 2% world GDP in 1759.  But Briton destroyed agri trade and industry, so that India became share holder of only 2% world GDP in 1900.

In third 50th year of British Administration 2.5 to 3.0 crore Indians died because of malnutrition, hunger and poverty as they couldn’t purchase  food to feed themselves,  because of British created unemployment and de industrialisation of India. But these facts were hidden from whole world in their documents.

Meanwhile, they became busy in dividing India by creating massive hoax and rumors. They used several rumors for various reasons to create different identities amongst Hindus to “Divide and rule” and ” fabricate the concocted stories in the name of fictitious science to create the background of conversion”.

Maxmuller dreamed of a Fantasy of certain Races  speaking Aryans  used to lived together in Asian Steppe before they migrated to west (Europe) and East (India), in neighbourhood of Semites (read Jews) and Turaniyans (read Islamists), in an unknown Era to the historians.

It caught the imagination of all pervert European Christians and this story was written and rewritten in various formats by European Christians. Their total aim was to delink their Religious Ancestry from Jews because of inbuilt hatred in Christianity towards them. It resulted in massive blood loss of Jews and Gypsies in second world war by Aryanized Christians under leadership of Hitler.

This Aryan fantasy was used to define Hindu society too along with biblical mapping of Hindu society based on Curse of Noah. The Curse of Noah created the basis of color discrimination by white Christians towards non Christians.  By applying this curse, they divided Hindus in their non governmental and semi governmental documents in Savarnas and Asavarnas, literally by interpreting meaning Varna as colour.

Fourth 50th year they used these fabricated  and concocted pervert stories as part of state documentation to create the legal basis for future conversions.

Maxmuller, who has been worshipped as a great sage by Indian academia had declared that “Caste …… is greatest hurdle in conversion. But it might work as powerful engine of conversion in future not of Individuals but of whole community”.

So they targeted Caste and Brahmanism. They postulated that Caste was evil and it was creation of Bramhans while Aryans were entering in India, as Caste word is not mentioned in Vedas.

Nesfield and Risley came with the postulation  story) that Caste was created by Aryans capturing the females of Aborigines (read Shudra and Dravid) and by making them wives and concubines.

They started segregating and isolating the different Hindu communities in different groups to address current divide and rule problems and to created background for future conversions.

They started Census of India in 1872. Census was government documentation, so it was a legalised tool too. They did census on basis of Varna in 1872 and 1881. Census of 1891 was done on the basis of profession.

In 1901, Lord HH Risley used various methods including anthrometry for census and identified 2378 castes and 42 races in Hindu community. He used name of Manusmriti that it mentions four Castes (not Varnas) and then went on applying his own module to divide Hindu society in 13 broad groups.

Initial six groups were called Aryans or Savarnas (1- Bramhans 2- Allied Castes to Bramhans 3- kshatriyas 4- Allied Caste to Kshatriya’s 5- Vaishya 6- Allied castes to Vaishya). There were designated as upper castes by Risley and his successor Census commissioners; rest were designated as lower castes by him and others. This Caste based census was  continued in 1911, 1921,1931. It was discarded in 1941.

They targeted different Hindu communities and made laws to identify them separately from the others. This total exercise was done to create solid legal background for conversion of Hindus into Christian fold.

They used a word Depressed Class in 1917 in disguise of educating the children of unemployed and de industrialized Hindus, which became part of 1921 Census. But its definition was not given as to which group and communities will come under depressed class.

In 1928, Simon gave the task of defining this depressed class to Dr Ambedkar, who identified them as Untouchables and submitted his report to Lothian committee in 1932.

Most of us are aware of Britons’ exercise of nominating Dr Ambedkar as representative of these newly created untouchables and giving them political bribe of separate electorate, followed by Gandhi’s fast strike and Poona pact.

In 1935, Government Act of India was created by British Parliament, which in 1936 created a list of 429 castes as Scheduled Castes. It became part of Indian Constitution in 1950.

How did they target them sequentially?

First target was Banwasis, who were isolately recognized as Animist in Census, later on incorporated in Constitution as Scheduled Tribes. Huge success in converting them!

Second Target was different artisan, manufacturing and farming communities, who were displaced from their traditional profession. Recognized in British Census as Shudras/ Aborigines/ untouchables / Dravida; later on incorporated in Constitution as Scheduled Caste. But in sociology they are still recognized as Moolniwasi, a translation of Aborigines or Adivasi (again translation of Aborigines). They were incorporated in Constitution as Scheduled Castes.

They became successful in hunting isolately different small fragments of this larger community, and ultimately converting them to Christianity. Dr. Udit Raj, Member of Parliament is best example of this second category.

All the people of Kori or Koli community are second best example of second category, as the records say that they were Respectable Bais Rajpoot, whose whole family including females were used to weave the cloths, which had attracted ruffians and Pirates to come to the India.

Third category OBCs are extension of second one, who were again isolated for hunting and converting in 1989. They are now on target of foreign funded Christian missionaries, since then.

Though many experts have  proven that the proponent of Aryan Invasion Theory Maxmuller was a Swindler, but the way Ruffian Christians were successful in Incorporating Aryan Dravid Aborigines divide in Constitution of India -their goal of Hunting to Convert has-been hugely successful in India.

Varna also denotes color but irony is that it has no relation with Savarn or Asavarna.  Sawarna means within the same class, Asavarna means out of the class. Whereas Jati or jat simply means extended family tree since more than ten thousand years. According to Amarskosh, Jat means – normal birth. It can be classified in upper or lower caste/ jati according to this simple understanding of Jati/Jat.

There are more than hundreds of jatis or castes within each varna according to Indian understanding of Hindu society.  But today Bramhan Kshatriya and Vaishya are three upper caste, and Shudra have been classified in more than six thousand castes after interference and interpretation of British colonizers.

Tribhuwan Singh is a Consultant Orthopedic Surgeon, Sociologist, and Historian.