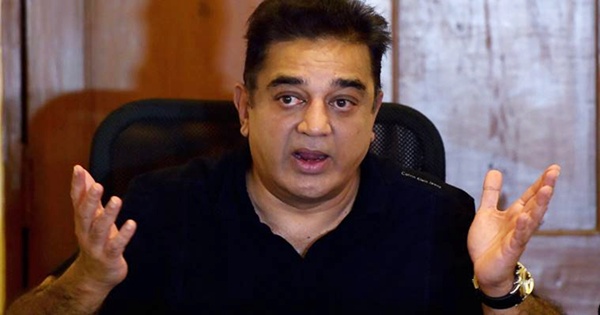 Aging 63-year-old actor Kamal Haasan sought refuge in the false Aryan Dravidian theories for political pebbles. According to a Times of India report, he said that South India must unite under Dravidian identity. He gave a clarion call to the chief ministers of Telangana, Andhra Pradesh, Karnataka and Kerala to find pride in embracing their Dravidian identities. Really? He is all geared up to begin his state-wide tour from the house of late President A P J Abdul Kalam.

Why can’t he be called as one of the “Break up India” forces trying to gain momentum? It has been proved time and again that the Aryan and Dravidian theories are false. Centre for Cellular and Molecular Biology (CCMB) has proved there is no genetic difference since last 20-30,000 years. There have also been numerous references in the Vedas and our ancient scriptures besides researches over the years corroborating the theories to be false.

Kamal Haasan is ignorant about antiquity of the north south connections. Ramayana (5677-5577BCE) speaks of Shri Rama from north having same culture throughout the Vedic lands of Tamil Nadu. The Pandyan kings are mentioned to have attended Arjuna’s wedding (Mahabharata 3162 BCE). Rajarajendra Cholan went by ship to Konark temple and then onwards by land to Ayodhya and then Badrinath Kedarnath and was felicitated by all kings enroute including the King of Nepal. Kokkula Vikramaditya of Kalyani of 7th century AD had Kalhana as his court scribe. There is nothing north and south except difference in languages which was mangled by attacks of Mlechhas starting in India in Sindh in the year 715 A.D started decline in North India’s glory of Hindu culture. Hence no question of Dravidian identity! Ignorance can be cured but stupidity cannot be!!

Kamal Haasan has no idea about historicity of the ANTIQUITY OF TAMIL NADU. According to ancient Tamil legends, the chronological history of Tamil Nadu begins with the arrival of Vedic sage Agastya and the establishment of early Pandyan Kingdom. The legends of the submergence of two ancient Pandyan capitals, South Madurai and Kavatapuram in two different eras indicate that ancient Tamilian history possibly originates from the beginnings of Holocene. This can be considered as old as from 11226 BCE to 5th Century CE). The great Tamil poet Nakkirar II, in his commentary on the treatise Iraiyanar Akapporul records that the first Sangam period lasted for 4400 or 4440 years, the second Sangam period for 3700 years and 1850 years of the third. Thus, Nakkirar II clearly indicates that 1850 years of the last Sangam era had already been elapsed before his lifetime. He has probably received this chronological information from the traditional legends.

According to CHRONOLOGY OF ANCIENT TAMIL NADU by Vedveer Arya,

For more details on CHRONOLOGY OF ANCIENT TAMIL NADU by Vedveer Arya visit the file section of Indian History~ Real Truth group in Facebook to view and read its free PDF file.

I have written in an article about the falsehood of the claims of the Dravidian theory and the North-South divide. Let me quote here again as refutation to Kamal Haasan’s Dravidian identity claim. Researchers from Harvard Medical School, Harvard School of Public Health, Broad Institute of Harvard and MIT in collaboration with indigenous scientists from Centre for Cellular and Molecular Biology (CCMB) submitted a research paper on ancestral Indian populations. This report was published in the Times of India. One of the co-authors of the paper was Lalji Singh, former director of CCMB. This paper refutes the north-south divide. It proves the Aryan Dravidian divide to be a myth and concoction of evil anti Indian historical heritage denying forces!

As per the Aryan Dravidian theory report, “the study analysed 500,000 genetic markers across the genomes of 132 individuals from 25 diverse groups from 13 states. All the individuals were from six-language families….it was impossible to distinguish between castes and tribes since their genetics proved they were not systematically different.”

Besides, Megasthenes in his book Indika said that India, being of enormous size when taken as a whole, is peopled by races both numerous and diverse, of which not even one was originally of foreign descent, but all were evidently indigenous; and moreover that India neither received a colony from abroad, nor sent out a colony to any other nation.

In the words of Arun Upadhyay, IPS, researcher, linguist, and author of 8 books and 80 research papers, “One of the 7 Samsthā  is the South Indian junction-Harihara of Karnataka is junction of Malayalam (Harihara-putra Ayyappa), Kannada (Śāradā), Telugu (Varāha incarnation of Viṣṇu), Marathi (Gaṇśa) and Tamil (Subrahmanya). There are many Vedic words used only in south. First Sūkta of Ṛgveda uses words Doṣā-vastā (night-day). Night time meal is called Dosa. Vasta is used for day or sun in rural Telugu. Viṣṇu (man) had designed towns. Being largest (Uru) design, Viṣṇ is called Urukrama in śānti-pāṭha. Towns are called Uru only in south, e.g-Bengaluru, Mangaluru, Nellore, Chittur, Tanjaur etc. Hegde means village head in Vedas. This is used only in Kannada. In Hindi, its derivative Hekaḍī (bossism) is used. Farmers on coast have been called Reddy in Ṛgveda. Andhra has largest farmland in south, so farmers here have title Reddy.”

There was an article about Kamal Haasan in Kumudham magazine about him insulting the Hindu Faith. The article reads that when Kamal showed the rushes of movie ‘Dasaavatharam’ to Mr. M. Karunanidhi, he immediately kissed Kamal in the cheeks because of the portrayal of Shaivaite-Vaishnavite fight in the movie. Wow now Kamal has notched up higher with view to illusionary dominating the political space, which he fails every time! Remember on his birthday almost all political parties shunned him; such is the reach of his persona. He seems to suffer from Delusional perception which is a first rank symptom of schizophrenia and badly needs to be addressed as soon as possible.

Three months ago Kamal Haasan writing for a Tamil weekly news magazine had said, “The right wing cannot challenge talk of Hindu terrorists because terror has spread into their camp as well. Hindus are losing faith in ‘satyameva jayate’ and instead subscribing to ‘might is right’”. Kamal Haasan’s ‘Hindu terror’ comment garnered criticism from all quarters. While RS and BJP leaders lambasted him for his statement accusing him of eying the Muslim votes, a Muslim youth leader from Aligarh announced a reward of Rs 25,000 to anyone who blackened his face. Akhil Bharatiya Hindu Mahasabha leader Pandit Ashok Sharma had said that the actor should be hanged or shot dead for his comments.

B.K. Krishnaraj Vanavarayar, Chairman of the Bharatiya Vidya Bhavan Coimbatore Kendra, delivering a lecture on ‘Holistic Education’ as part of Bharatiya Vidya Bhavan, Chennai Kendra’s golden jubilee lecture series said, “The strength of India is Her culture…There is no culture equal to India’s…. .”

Hindu Munnani founder-leader Ramagopalan had said “Hindus in Tamil Nadu are under severe threat from Islamic terror outfits and Maoists. Many Hindus have been killed or brutally attacked. But political parties are not raising their voice against it as they depend on minority vote banks… We are working towards bringing at least one lakh people who have the Hindu sentiment, especially youngsters, from all over the State.” It would be a real exercise for Kamal Hassan to garner 1000 people for his cause.

Ever since the British rule, the ‘break India’, and ‘divide India’ forces have gained big momentum. The British left India yet their ‘break and divide India’ influence hasn’t. Distorted historical records which they have left behind and which find a prominent place in our History text books continue to influence minds, generation after generation. Latest to join the ‘break India’ kitty taking refuge in the false Aryan Dravidian theory is Kamal Haasan.