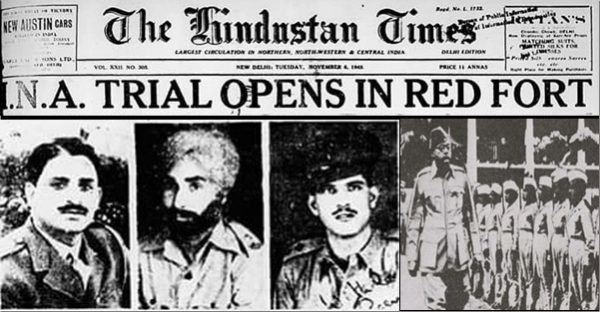 The Provisional Govt of Free India was formed by Netaji Subhas Chandra Bose in Singapore on 21st October, 1943. This was the first government of free India (in exile).  This government was recognized by Ten Countries of the world – Japan, Germany, Italy, Singapore, Burma, Malaya (Malaysia), Manchuria, Mongolia, Phillipines and Russia.  Immediately after its formation, it declared war on Britain and America. Azad Hind Fauj, also called INA, the army of this government, actually fought the war. Azad Hind Government was a full fledged government , running many ministries and departments.

Azad Hind Fauj was the Regular Army of this Provisional Govt, which posed the toughest challenge  to the British Forces in the whole of World War – II. It is a fact of history that the British left the country in a hurry, as a fallout of the Red Fort Trials of Azad Hind Fauj officers.  The RIN ( Royal Indian Navy) Mutiny of 1946  or  the Bombay Mutiny, in which the Naval Ratings of the British Navy ships of Bombay dockyard erupted in open revolt against the British Raj, was a direct fallout of the Red Fort Trials of INA officers.

This mutiny shook the very loyalty of the Indian soldiers of British forces, towards their British Masters, which compelled them to immediately send the ‘Cabinet Mission’  to India to draw up the plan of Indian Independence. British PM Clement Attlee, during whose tenure India got her freedom, later confessed to Justice  P.B. Chakraborty, Chief Justice of Calcutta High Court, who was the Acting Governor of West Bengal, during his visit to India in 1956, that the British hurriedly left India due to Netaji Subhas Chandra Bose and the Azad Hind Fauj and the patriotic impact it had on the general masses and especially the RIN Mutiny, which shook the very base of the British Raj, like an earthquake shakes a building and grounds it. (Journal  of Historical Review).

It was apparent that the British feared another 1857 type revolt, the horrific memories  of which, though 90 years old by then, were fresh in their minds. Sir Stafford Cripps said that ‘The army in India is not obeying British Officers’. The fear of 25 lakh Indian soldiers of British Indian Forces, pitted against merely 40 thousand British Officers also catalyzed their hasty retreat.

‘Victor writes the history’. Our pre-independence history is written by people loyal to the political establishment of the day. But we must not forget that we should be loyal to the ‘actual history’ or else it will not forgive us.

Sufferings and cries of numerous freedom fighters, who gave everything they had, rotten indefinitely in prisons, held their chests to British bullets or hung to their deaths on nooses, cannot be hidden or suppressed. History has to be told in its correct perspective. This will be a great motivation for the children and youth, our future generation and only TRUTH can the best motivator.

Azad Hind Fauj was faced with heavy crunch of resources, as it was not a regular army of any independent nation and numerous hardships came its way, but fired with burning patriotism in their hearts and a dream of freedom of their Motherland in their eyes, they pounced upon the British colonizers, with  all their might and fought till the “Last Man, Last Bullet”, true to the spirit of any soldier. It was the first ” National Army” ‘of, for & by the people of the Nation’ for the single goal of achieving independence for the Nation.

The soldiers of INA sacrificed everything they had of their own, on the battlefield. Whoever were caught alive, were brought to India by the British govt and many of them were shot in detention. 1580 Prisoners of War (PoW) of Azad Hind Fauj were shot dead by the British, by firing from machine guns, in a single night, at Neelgunj, Barasat, North 24 Paraganas (W.B.) and Jhikorgaachha (now in Bangladesh). Bullet marks can still be seen on trees and walls.

The Nation never came to know the Truth of the valiant battle and the ultimate sacrifice made by these unsung soldiers. Sadly enough, today’s generation seldom knows of its suffering and sacrifice and contribution to the Nation and the next generation will surely consign them to the dustbin of history.  This is unfair to these heroes who devoted their entire lives for the Nation. A Nation, which doesn’t remember or praise its Heroes, seldom produces heroes, as no patriotism is infused in them.

The govt should establish an INA museum as a tribute to the INA soldiers who sacrificed their lives for the freedom of the country. Red Fort is the first preference. Because it was the INA trials in Red Fort that triggered unrest among Indian soldiers in the British Indian Army. They rose in revolt, ultimately forcing the British to leave India. Had the British not taken a decision to leave India, there would have been another 1857-type revolt which was started by Indian sepoys posted in the British Indian Army.

Since the Azad Hind Fauj and the Govt operated in many countries and its history has been systematically suppressed for ages, its remnants lie scattered in Japan and various  South-Asian countries. These governments should be formally requested to cooperate with us and hand over the belongings for display in the INA museum.

What should be part of the Proposed INA Museum?

1. Documents of Azad Hind Government are held by the National Archives. Copies of these must be displayed in the museum, in appropriate forms (like on large boards so that people know that it was a full-fledged government)

6. Food Supply system of Azad Hind Government in Indian territories liberated by it

7. Medals and prizes distributed by the Azad Hind Government

8. First person accounts of Azad Hind Soldiers (or their family members) of their experiences

10. Pieces of Stones of Azad Hind Memorial at Singapore, which was blasted on the orders of Mountbatten.

Where can the INA Museum be built?

Clearly there are three options :-

1. Red Fort has a museum of Azad Hind Fauj (named Swatantrata Senani Sangrahalaya). It is housed in the Salimgarh Fort, which is behind Red Fort and is joined by an iron footover bridge. This fort is the place, where the desperadoes of Azad Hind Fauj were detained before trial.  Though historically, the museum is in correct place, but this fort is in a very obscure place and is not easily approachable. There are no signages too to indicate that such a museum ever exists. This defeats the purpose of the museum and is an insult to the brave freedom fighters who fought for the country and lost their lives.

This museum should be shifted from Salimgarh Fort to one of the COLONIAL BUILDINGS (there are four to five huge colonial buildings) , adjacent to the the ‘Diwan-i-aam’ and expanded on the above lines. Archaeological Survey of India can be requested on these lines.

3. Lutyen’s Zone has many vacant bungalows, which have sprawling vacant space with majestic British era buildings. The Central Government can be requested to allot one such Bungalow for establishing the museum of Azad Hind Government in that bungalow.

1. When the nuclear bomb was dropped on Japan, Netaji was traveling ahead of Bangkok. He met the General and Royal Priest of Thailand, both of whom pledged that each man of Thailand will protect him.. and urged them to secure the records of Azad Hind Govt. Many records are kept in some basement of a temple in Thailand.

2. Md. Habib, renowned banker of Pakistan, donated all his treasures to Azad Hind Fauj and requested Netaji to give him some responsibility in his Govt. He was made the Governor of Azad Hind Bank. ‘Habib Bank’ of Pakistan had five  branches – Karachi, Bombay, Hongkong, Bangkok and another one  … After independence, Md. Habib went back to Pakistan. Habib Bank is probably still running in Pakistan. Many Bengalis living in remote villages of Andamans may have coins of Azad Hind Govt.

3. Till 1952, Azad Hind Govt. currency was in force in Mizoram, Nagaland, Manipur and Andaman and Nicobar Islands.

5. Singapore ‘Shaheed Stambha’ stones (blasted by Mountbatten), are available in Shahnawaz Khan’s home in Rawalpindi. Shahrukh Khan mentioned this in one of his interviews.

6. Many articles are available in Moirang Museum ( With the in-charge, Col. Malik, Commissioner of ‘Nai Sarkar’  who is now no more).

The basic idea is to showcase history in its correct perspective and highlight the contribution of thousands of unknown and unsung personnel, who fought  tooth and nail, without any personal aspiration, just to free our Motherland. We owe our freedom to them and it is our duty to give them their rightful place in history. The museum should be at a Central Place in Delhi, so that people can easily approach it.