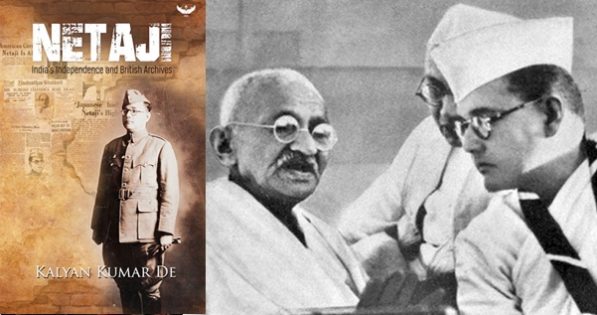 Ever since Independence, the official narrative of India’s Second War of Independence has been that India got its freedom on the strength of Gandhian Non Violence and Satyagraha, as epitomized by a famous Bollywood song – ‘De di hamein azadi bina kharag bina dhal  Sabarmati ke sant tu nein kar diya kamal’. This was as if India never did, never needed to, never should and never will fight for gaining or safeguarding its freedom. It is this pacifist narrative that has circumscribed our national policy till the shame filled episode of the war with China in 1962. This narrative had no place or role for the Indian National Army (INA), for Subhash Chandra Bose or for thousands of patriotic Indians such as Rash Behari Bose, Bal Gangadhar Tilak , Veer Savarkar and Bhagat Singh to name only a few.

The AXIS forces lost the Second World War after the horrible atomic bombs devastated Hiroshima and Nagasaki. Axis forces surrendered to the Allied forces on 15 August 1945, bringing about an abrupt end to one of the fiercest wars ever fought, costing the world some 75 to 85 million lives. But Netaji Subhash Chandra Bose, the Supreme Commander of the Azad Hind Fauj (INA), though aligned with them refused to give up his fight for driving the British Raj from India.

The surrender of INA forces was followed by large scale incarceration of the soldiers and officers of the INA in SE Asia and in India. The British had succeeded in maintaining complete secrecy about the very existence of the INA throughout the war but the stories of bravery, suffering and sacrifices by the INA soldiers and Subhash Bose’s outstanding contribution during the war for Independence came to light from stories told by the returning INA soldiers. India learnt that almost 30,000 INA soldiers had made the ultimate sacrifice for India’s Independence. That Indian patriots had paid for freedom with their blood, dearly and gladly. People of India spontaneously recognized Netaji Subhash as India’s greatest Hero, his Azad Hind Fauj as its first ever national Army and Azad Hind Haqoomat as the first legitimate government of Independent India with Subhash Chandra Bose as its first supreme leader.

Dr Kalyan Kumar De, has now for the first time brought out into the public domain, authentic documents from the British Archives. His research and analysis proves beyond doubt that it was not Gandhi’s Satyagraha or Nehru’s leadership, but Subhash’s militant nationalism and its influence on the public psyche of India that forced their hand leading to India’s its truncated transfer of power on 15th August 1947.

Another controversy that has defied resolution, relates to the Congress having hastily agreed to the partition of India, even after Mahatma Gandhi ruling out such a proposal. When Gandhi was released in June 1944, the Quit India Movement had all but died as a result of the detention of Congress leaders. But the people of India expected him to revive the movement. Responding to a  6 Netaji: India’s Independence and British Archives persistent request to re-commence the movement, Gandhi declared that he could not do so because he no longer had the mandate, as he had lost his authority over the Congress Working Committee.

In the meanwhile, the British had announced the trial of three senior most INA commanders – Shah Nawaz, Gurbaksh Singh Dhillon and Prem Sehgal, on charges of war crimes and betrayal of the oath of allegiance to the British Crown. This was seen by the people as a determined last attempt by the British to perpetuate their hold on India by subjugating the Indian spirit and desire for freedom, once and for all.

However India rose up in armed protest and public outrage. The trials had to be withdrawn and British authorities got into panic driven confabulations leading to their decision to flee for their life. In order to assuage public outrage the British however notified elections to the Central and Provincial Councils in January 1946.

Nehru and the Congress leadership were however completely unaware of the British government’s decision to flee India at the slightest sign of rebellion. In fact Nehru and the Congress leadership had already given up the fight. Nehru’s candid admission in 1960 to British historian Leonard Mosely that “we were tired men and getting on in years too and few of us could stand the prospect of going to prison again”, is testimony to the fact.

When Jawahar Lal Nehru and others were released in June 1945 they expected to see a demoralized and leaderless people cowed down by British repression post August 1942, but were surprised to find huge crowds of supporters gathering to listen to them. They mistook public anger demanding release of all INA soldiers as a  sign of enthusiasm for the elections. Resultantly, the Congress won the elections with a massive public mandate.

Thus the British decision to flee India and the Congress decision to agree to dominion status within the Commonwealth are in fact over lapping decisions by the two antagonists.

Dr. Kalyan De relies on excerpts from ‘The collected works of Mahatma Gandhi’ to establish that on one hand, Mahatma Gandhi had been marginalized within the Congress and was therefore not in a position to oppose partition, and on the other, that Nehru and others among the Congress elite had lost the will to continue the struggle and opted for a quick fix, even at the cost of horrific Partition.

‘Netaji Subhash Bose: The Liberator of Indian Subcontinent’ is a seminal work of historical research by Dr Kalyan De and is based on authentic documents from the British archives, declassified in 1971. These documents are in the form of carefully selected letters, reports and minutes exchanged between the main protagonists of the British Raj in India – the Viceroy Field Marshal Viscount Wavell, the Commander-in- Chief of the British Indian Army General Sir Claude Achinleck and other functionaries, such as the Governors of various states and the Intelligence Department on the one hand and Secretary of State for India, Lord Pethick Lawrence and other functionaries of the British administration in London on the other, leading to their ultimate decision to leave India as early as possible.

These documents are especially important as the proof of the INA’s impact comes from top British authorities who were directly concerned with the final  8 Netaji: India’s Independence and British Archives decision. They also describe in detail the irony of British unpreparedness and inability to deal with the situation arising out of their decision to try the three senior most commanders of the INA – Shah Nawaz, Gurbaksh Singh Dhillon and Prem Sehgal on charges of war crimes and betrayal of the oath of allegiance to the British Crown. These documents thus provide a ring-side view of the decision making process for their early exit from India to avoid having to face an 1857 like situation jeopardizing the lives of 43000 European people on the sub-continent at the time.

The two controversies surrounding India’s freedom struggle finally stand resolved in that the British left India in a hurry in order to save their lives all because of the influence of Netaji Subhash Chandra Bose and the Indian National Army – not because of Congress agitations, as also that India’s Partition resulted entirely due to the impatience and lack of correct understanding of events prevailing in 1945-46 on the part of Nehru and other Congress elites.

This book is a tribute to the patriotism and leadership of Netaji Subhash, the blood of nearly 30,000 men and women of the Azad Hind Fauj (INA). Netaji Subhash Bose –INA Trust and the people of India at large gratefully recognize the contribution of Dr Kalyan De in bringing the truth to light.

The above post is a Foreword by Brig. R. S Chhikara (Retd) of the book Netaji: India’s Independence and British Archives by Kalyan Kumar De. 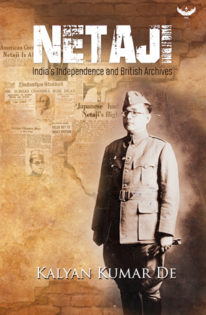 Here is a review of Netaji: India’s Independence and British Archives by a former journalist for nearly two decades, with wide ranging experience.

What makes a book big is not its size, but its sweep.

Netaji: India’s Independence and British Archives by Kalyan Kumar De, published by Garuda Prakashan in partnership with Netaji Subhash Bose INA Trust, fits the bill in this regard – small in size, huge in its sweep.

It deals with the much debated question:What made the British leave India, rather suddenly and, after ensuring that the country was partitioned?

But, this book clearly establishes that it was Netaji Subhash Chandra Bose and his Indian National Army (INA), the rising sympathy for which played on the minds of the British, forcing them to take a call on leaving India in a hurry.

Their argument: A revolution bigger than the Quit India Movement (QIM) of 1942 was in the offing, and, if that happened, they would not be able to hold on. (Also, papers clearly show that Mahatma Gandhi, who launched the QIM, was himself not interested in leading the agitation after his release in 1944.)

The British suspected that Army could not be trusted with loyalty any more – there was, of course, the Royal Indian Navy mutiny – in the face of a massive nationalist agitation.

The book quotes secret letters, minutes, reports etc, among the top echelons of the then British administration in India and London. The documents were de-classified by Britain in 1971.

That nobody looked at them in the past 50-odd years, is a sad commentary of where we stand vis-a-vis resurrecting and reclaiming our own history.

We have heard about Lord Mountbatten, but how many of us have heard these names: General Auchinleck (the then Head of the British Army in India), Lord Viscount Wavell (the then Viceroy), Lord Pethick-Lawrence (the then Secretary of State in the British government, looking after India office) etc?

Also, these letters and reports are from a period, ranging, primarily, between November 1945 and March 1946; a good 17-odd months before India actually got independence.

The reader could well ask how can just a handful of letters, over a period of just five months, be considered a proof for such a momentous decision!

That is where the sweep of the book becomes huge!

The way General Auchinleck analyses why the loyalty of the Indian Army would now be suspect is an eye-opener for a lay observer, as also to those militarily inclined. Readers should look at it, as if they were reading a manual titled ‘when-the-natives-in-the-army-become-unreliable’.

A word is necessary on how the book has been written.

It appears that the author has taken the reader to the British Archives and goes on laying one paper after the other for him/ her to peruse – Just the bare facts!

Most of the letters and reports have been quoted verbatim.

This book gives adequate evidence on how the political leaders of those times – Jawaharlal Nehru, Mahatma Gandhi and Mohammad Ali Jinnah et al – were playing out their politics; and what the British thought about them.

Much-needed unbiased research on this aspect too will help settle much confusion on who was responsible for partition.

In short, it’s safe to call this book “a handbook of truth”.