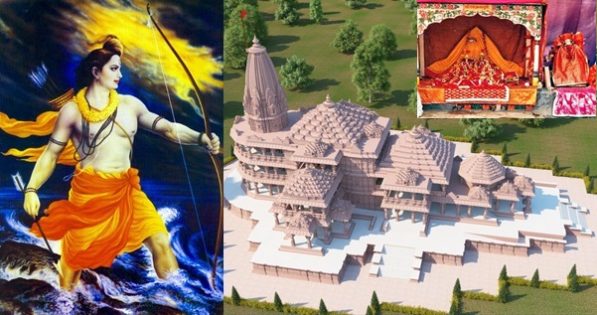 On 5th August 2020, perhaps for the first time, in the history of India, by building the Ram Mandir, the Hindu community may finally be said to reclaim something it has never done before from the Muslim community. The Hindu community hasn’t been in the habit of reclaiming. They have only seen what belonged to them, taken away. The Ram Mandir is a role reversal, a transmission of trauma reversed uphill, one that may have far reaching consequences for both. The balance that tilted in favor of the latter in the garb of secularism may have just received its first death knell.

When the British left the shores of India on 15th August 1947, Indians celebrated thinking it to be our independence. On 5th August 2020, they may just celebrate another independence, a task that was left unfinished, that 15th August 1947 didn’t accomplish, a freedom from fear, injustice and humiliation for a people used to slavery.

In school textbooks every school child in India is taught that when the British left us on 15th August 1947 we became independent. Future generations might just say, “No, we didn’t,” and write, “It was the day when a group of White men who ruled us left our shores in fear. They left behind a people filled with shame to be ruled by a group of men who had brown skin but thought like them, had the same mindset. Everything that makes a man free was left untouched.”

My father, a scholar of history would often ask his friends, the generation that saw the times before 1947 and afterwards, “What, if any, had changed for Indians after 15th August 1947?” He never got an answer.

The question above never left my imagination. As I grew up, I began to explore by asking people. Did centuries of fear we lived in vanish on that day? Did we undo the slavery of thousand years and it vanished like magic?

Growing up on the works of Franz Fanon and liberation psychology, I learnt that real independence from fear is not the day when your perpetrator leaves you, but the day when you throw off the symbols that chained you, when the deepest recesses of mind, chained and shackled that stopped you from being equal and claiming it once again to become yours.

5th August 2020 will be that Independence Day for millions of Indians. We will reclaim what we had lost.

On that day Hindus, their children would throw off a symbol of oppression, an injustice of history heaped on them. On that day many will feel the Hindu has finally come of age, to claim his rights over owning the piece of land where his God was born. That perhaps is the real freedom that he has been waiting for. The chain of fear has come undone, not just to liberate his land, but for him too.

The Hindu society has remained a society frozen in grief for a thousand years. Ever since the first temple was destroyed by the invader and every blow on the stone that destroyed the temples from Kashmir to Kanyakumari, the grief of a society only increased remaining an indelible part of psyche, one that saw no escape, would pass on from generation to generation, a burden for our children, a shame that we wouldn’t open about to them.

That frozen sea of ice inside us will finally melt on 5th August 2020. It is a day that I believe will become important for a billion Indians, not just because the temple is being built, but because it will be counted as a moment when centuries of injustice came to an end. It will be the day when the hopes, aspirations of an entire nation trampled under the feet will rise again. It will be the day when the world may learn that religion can’t be foisted by force on others through fear or atrocities. That it was not possible to do so in a town called Ayodhya.

When native Americans stood and encircled around the Dakota pipeline stopping it from being built because it belonged to their ancestors, the world gathered around them. I hear the same yearning in a man who in Ayodhya, connected to his land in an inalienable way, a symbiotic bond that couldn’t be ruptured, tried the same. That a land, a temple desecrated and ruptured a million times to end a civilization by invaders couldn’t be stifled, rose again as a voice that is being heard again. It is the voice of longing, more real than food, shelter and clothing. I believe there are a million such voices around the world waiting to be heard and which will rise now.

When the history of India is written in the future, three events will be marked as turning points, as being transformative that changed the minds of us Indians forever out of fear, shame and humiliation. The first is the building of the Birla temple in 1939. Before it came up, there was no big temple in Delhi for almost a thousand years. Where have they gone? When the oldest church is more than two hundred years old, a hundred and odd mosques can be seen from far away in every part of the city, why is there no temple whose spire can be seen? Is it because no one dared to build one for fear of punishment in a land ruled by Muslims? Did the fear run so deep that the coming of British only took it deeper? Was it the freedom struggle that for a moment, however brief, lit that spark to build the Birla temple before it died again for absence of a political leadership?

The second was the building of the Somnath temple. Destroyed many times and built at the initiative of Sardar Patel, it was a step taken forward in the midst of uncertainty and doubt for a nation that hadn’t come to terms with the meaning of freedom as it didn’t equate it with the blood spilled of its sons hanged and killed. A destroyed temple in India still remained and symbolized a defeat for its slave sons, likened to a structure of humiliation that couldn’t be erased ever, evoking fear and pain. A denial that could have been ended if we had a leadership who could see the devastation of colonialism and hated them for it.

The third and perhaps the most important of the three is the building of the Ram Mandir in Ayodhya. It signifies the eternal spirit of a nation that doesn’t give up. It marks a perseverance, a tenacity of a people who stand and wait. It shows the everlasting nature of faith in the God and the wait of the people for him. The people of Ayodhya waited fourteen years for Shri Ram to complete his vanvaas and come back home. The people of India have waited five hundred years for him to come back to his temple. A perseverance marked in stone with the blood of thousands who were slaughtered for it.

Where does the Hindu go, after building his three temples most symbolic of his slavery? The answer is easy to guess. The three temples built over a century represent the coming of age of a race who is rising after a millennium unlike any other example in history. Maybe the Hindu will take wings now, undo the very injustice of a thousand years to say ‘Satyamev Jayate’.

Rahu Transiting in Cancer from 18th August: Know What Is in Store for You