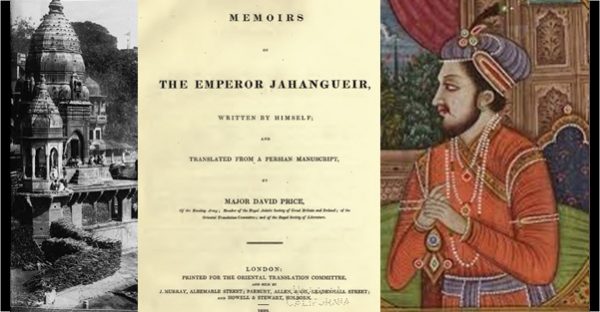 There has been lot of praise for the Mughal Dynasty all over text books and media without the concrete proof of their goodness, but only to hide the facts of their hatred for the Temples,Universities and Science of this land.

Much has been written about Babur till Aurangzeb, in between what is little known to the public is Son of Akbar, Jahangir, who ruled from 1605 until his death in 1627. During the debates, lot is praised about Akbar, Shahjahan and Aurangzeb but no mention of Jahangir.

Given below the unedited text of Jahangirnama, the memoirs of son of Akbar, Jahangir.

The book was translated and published in 1829. On page no 14 and 15, Jahangir describes his deed: 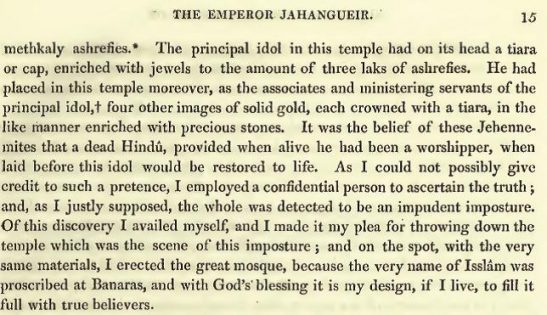 “I am here led to relate that at the city of Banaras a temple had been erected by Rajah Maun Sing, which cost him the sum of nearly thirty-six laks of five methkaly ashrefies. The principal idol in this temple had on its head a tiara or cap, enriched with jewels to the amount of three laks of ashrefies. He had placed in this temple moreover, as the associates and ministering servants of the principal idol, four other images of solid gold, each crowned with a tiara, in the like manner enriched with precious stones. It was the belief of these Jehennemites that a dead Hindu, provided when alive he had been a worshipper, when laid before this idol would he restored to life. As I could not possibly give credit to such a pretence, I employed a confidential person to ascertain the truth ;and, as I justly supposed, the whole was detected to be an impudent imposture. Of this discovery I availed myself, and I made it my plea for throwing down the temple which was the scene of this imposture ; and on the spot, with the very same materials, I erected the great mosque, because the very name of Isslam was proscribed at Banaras, and with God’s blessing it is my design, if I live, to fill it full with true believers.”

History is full of evidences that prove how systematically our religious monuments were destroyed, wealth plundered and common citizens subjected to extreme torture, cruelty, atrocities and made to change religion.

Unfortunately for the India of today, the very same people, without knowing their roots and past culture talk of intolerance. They do not even know the meaning of word intolerance when compared to intolerance exhibited to their ancestors by the Islamic Invaders.

Jahangir admits in his memoir that it is not possible to kill all the Hindus from this land, the fact learnt bitterly by his father. Hence he chose to play safe by occasionally killing the Hindus to set examples of torture and cruelty so that people out of fear change their religion. He was especially concerned about the communities which possessed skills in arts and manufacturing industries.

The traitors behind the masks of Historians have worked day and night to brainwash the youth of today, but they forgot that truth would be revealed some day.