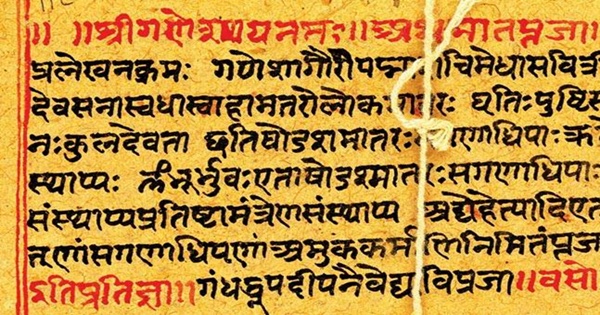 Why would the West learn Sanskrit? What made them set up Sanskrit Chairs at different Universities and spend millions of pounds in learning this language? A lot has been said but not to the deaf ears and blind eyes of the Indians. I have attached a small deliberation by Mr. J Muir in the year 1860. If we still remain ignorant and succumb to the grand design of Christianity and Islam, our culture will find its place in History only.

Mr. J Muir prepared a submission before the University Commissioners (like UGC of today) giving the reasons to set up a Sanskrit Chair at the University of Edinburgh. This note was prepared in the year 1860: 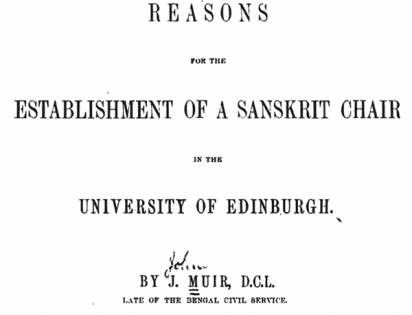 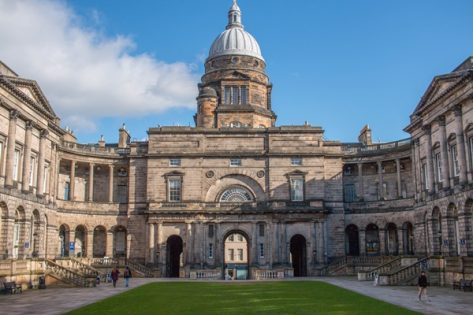 This prompted the setting up of Sanskrit Chair not only at Edinburgh but many other Universities in England.

Let us see what Mr. J. Muir had in mind and what he wanted English students to achieve by learning the Sanskrit Language:

1. The treasure chest of knowledge:

“A knowledge of Sanskrit is consequently of great importance to all who desire to make themselves acquainted with the laws, the religious beliefs, and the philosophical systems of the Hindus, and who are not satis fied with obtaining the information of which they are in quest in a partial way, and at second-hand, through the medium of translations,” wrote Muir.

2. To convert Hindus to Christianity:

Muir wrote, “The missionaries who go out from Scotland for the evangelization of India, should also be taken into account”…. 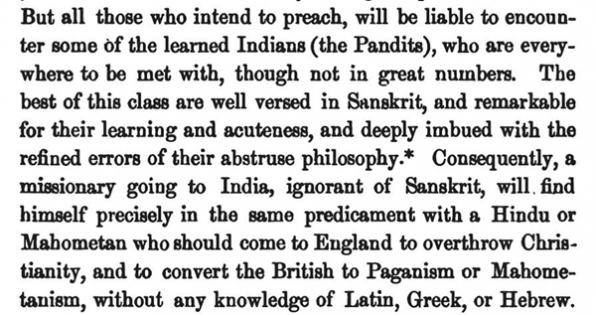 3. The antiquity of the language and superiority of Sanskrit over Latin and Greek:

4. The wealth of Knowledge hidden in the Vedas and traceability of the roots of modern civilization through Vedic Texts:

The Englishmen knew it very well that they cannot destroy our culture if they do not know the weak links in the society or if they cannot create such weak links. They first learned our languages, then they infiltrated and destroyed our traditional education system. They tried to collect as many manuscript as possible, translated them for their own use and interpolated and published multiple copies and distributed everywhere to create confusion. This led to the corrupted texts being adopted in the education system and society too.  They relied on the textual translation with their limited knowledge of Sanskrit Vocabulary and even further limitations of a poor language called English.

It is just like the Einstein formulas, which everyone can read but to decipher them you need the knowledge of Physics, Mathematics and different branches thereof. So they put before us the translation of the mere words in their most crude forms with so much false authenticity that the most scientific language with all the experience of different Sages over thousands of years came to be called as the Songs of the Shepherd.

The Education System introduced by Macaulay was faithfully followed with more vigour and more false History introduced by his mental slaves who fathered Pakistan yet came to be called Father and Uncle of this great nation which has fathered great personalities of the likes of Rama, Krishna to Ramakrishna, Dayananda and Vivekananda. These slaves conspired to kill our cultural roots and put a dark blanket on the efforts of the generations to fight a worthy war for preserving our Culture, Knowledge and History. These slaves simply tried their best to wipe off the History of valour of our ancestors, Knowledge of our Sages, Science of our Language, Beauty of our Architecture, Antiquity of our Civilization in the name of Ganga Jamuni Sanskriti.

We are taught to celebrate our peril, rape of our ladies, sale of our own people who were made slaves, destruction of our own temples, buildings and renaming of our ancient cities after their destroyers and plunderers.

Thinking of today, the English are very much successful in destruction of our social system and introducing Christianity to a large population. The invading Muslims are successful in carving out 3 nations for Muslims from this Great Nation, both successful in plundering the wealth and whatever they could lay their hands on but what could we the descendants of the Great Culture and civilization achieve for ourselves and for our future generations?

Ref: Reasons for the Establishment of a Sanskrit Chair in the University of Edinburgh, J. Muir.

Falsification of History – An Epidemic in the West