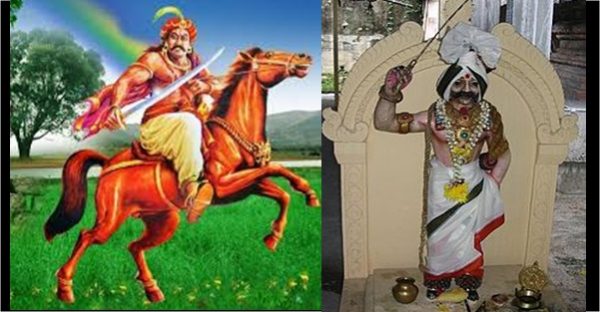 India has seen a rise of ‘dalitisation’ of situations. An attempt  of ‘Break India’ forces to tarnish the image of the nation, to divide Hindus further on the lines of caste, to create a vast gap between Dalits and other class of Hindus. All for vote gains and to create chaos and unrest across the country!

There has been numerous recent instances of how Dalits were appointed priests and led ‘puja’ rituals in temples. 22-year-old Yadukrishna, a Dalit from the Pulaya community, was made the head priest of 150-year old Manappuram Siva Temple attached to the Travancore Devaswom Board in October 2017. According to a The New Indian Express report, Shivanand Giri, a Dalit seer of Juna Akhara said,“lack of religious gurus among Dalits make them vulnerable to conversion” on the raging Dalit agenda dominating the country’s current political narrative. More recently, a Hindu priest CS Rangarajan carried Aditya Parasri, a Dalit, on his shoulders into a temple in Hyderabad to show ‘everyone is equal in the eyes of God’. 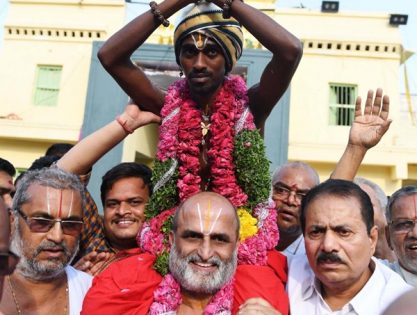 There are scores of other such examples. But no Bhim Sena comes to the streets applauding and supporting these! No media outbursts on these positive stories! Why? Because these fit in the ‘unite India’ and ‘Dalits have high roles in temples’  narrative rather than the ‘anti-Hindu’, ‘anti-dalit’, and ‘Divide India’ agendas!

In Sanskrit, ‘dalit’ means ‘oppressed’ and in Hindi, the term denotes ‘broken or scattered’. Dalit is thus no particular caste group, as perceived and coined. So any person, irrespective of creed, community, or religion, facing oppression, can be called a Dalit, but not a particular group of people. No ancient records find mention of Dalit as any group of people.

Not many have heard about Madurai Veeran, except in Tamil Nadu. Madurai Veeran, meaning ‘protector of Madurai’, was a Dalit warrior. He was entrusted with the task of protecting Madurai from robbers, thieves, and possible attacks. Today, he is worshipped as a folk deity in Tamil Nadu. Pandyan king erected a shrine of Madurai Veeran at the south gate of Meenakshiamman Temple. Why Dalits utter no word about him? Why media doesn’t broadcast such historical evidences?

According to a recent tweet by True Indology on twitter, “Madurai Veeran was a Dalit warrior. He protected holy city of Madurai and Meenakshi Amman temple. He is worshipped as a diety by people across all castes in Tamil Hindu temples You don’t hear about him as he doesn’t fit the anti Hindu narrative.” 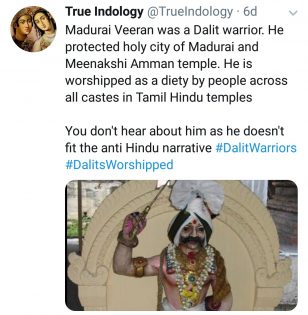 The downfall of the Vijaynagara Empire in Tamil Nadu saw the rise of governors of the kingdom declaring independence and establishing independent kingdoms. The Nayakkars ruled the Pandya region. Thirumalai Nayak, also called Thirumalai Nayakkar ruled Madurai between 1623 and 1659 AD. He successfully repulsed threats from the Muslim armies of Bijapur Sultanate and the other neighbouring Muslim kingdoms. During his reign, robbers and dacoits often looted people and homes and created chaos. Thirumalai Nayak entrusted Madurai Veeran as the chief warrior to put an end to the atrocities of the robbers.

Madurai Veeran was the son of a woodcutter (folklores consider him as adopted). As he grew up, he trained in martial arts and became famous in his neighborhood for his skills in the art of warfare as well as for his handsome looks. He also learnt the various art forms and became a master in Natya Shastra. His feats of valor reached the ears of the Pandyan Nayakkar king leading to his appointment as the chief warrior to deal with the thieves and robbers. Madurai Veeran was married to Bommi.

Soon, Madurai Veeran became well known as the protector of Madurai. He suppressed the robbers with an iron hand. Peace prevailed in the kingdom and the people started banking upon him. Meanwhile, Vellaiyammal, a royal dancer at the court of the Nayakkar king approached Madurai Veeran to teach her Natya Shastra. Moreover, she fell in love with the Dalit warrior. The Nayakkar king, who was attracted to Vellaiyammal, came to know of this. He immediately ordered a traitor’s death for Veeran, falsely charging him of not following his duties diligently.

The king felt guilty. He could not get sleep for several nights owing to his guilt. To pacify the soul of the dead warrior, he erected a temple of Madurai Veeran at the south gate of Meenakshiamman Temple and started offering prayers regularly. Peace dawned upon him. 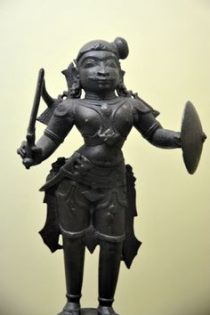 Today, there are temples dedicated to Madurai Veeran across Madurai, Tamil Nadu, Kerala, the Caribbean, Malaysia, Singapore, and South Africa. It is believed the warrior still protects the people of Madurai from thieves and looters. He is worshipped by people from all castes.

There are hundreds of stories of the valorous saga of Dalit warriors, both men and women, from History. Besides, according to 500 BC book Indica by Megasthenes, there was no caste system in ancient India. 7 types of division of labour have been described, not caste. The book documents India as a free society, indicating there was no forced labor in Indian society. Why is caste politics given more momentum?

There are numerous historical evidences that prove there were no discrimination in the name of caste. Beginning 1100 AD, Islamic rule was established in the Indian sub continent. The Islamic rulers subjected Indians to the worst of oppression through loot, plunder, massacre, forced conversions, and what not, destroying the nation culturally, socially, and economically. And with British rule, India was further drained of her rich culture and resources. Their divide and rule policy was their biggest advantage. The British left India yet their ‘break and divide India’ influence hasn’t.