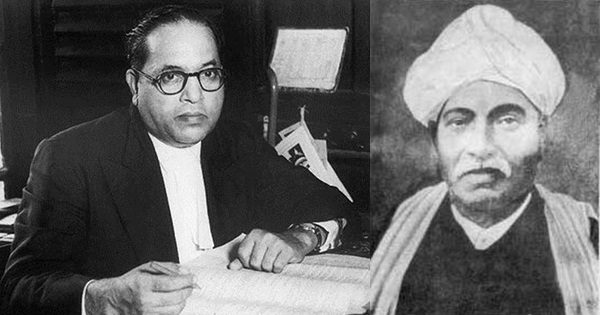 When young, Bharat Ratan Bheemrao Ambedkar used to go for the study in evening to Charni Road garden [now SK Patil Garden] of Mumbai. In the same garden the Principle of Wilson High School,  Krishnaji  Arjun Kaluskar, also usually made visit. Kaluskar was a Brahmin with progressive mind, and a generous of heart either. The way Bheemrao got to be deeply engrossed in doing study that could not be escaped from the eyes of Kaluskar. He could not resist himself from getting the introduction of Bheemrao. Introduction went on, and gradually the bond of deep mutual affection began to take shape between them as Guru and shishya [master and disciple].

Babasahab Ambedkar says in his autobiography,‘Conversation with him would inspire thought process in me.’ In Mahar community that Bheemrao hailed from, it was rare to see an individual earning education. And when in 1907 CE he made community proud by being first boy to have passed matriculation exam the people in the moment of such an extreme joy decided to honour their beloved with all fun fare.

Whom Bheemrao chose as the chief guest for the event was none other than Kaluskar. On this occasion he handed Bheemrao a booklet on the life of Goutam Buddha written by him as a present. Having reached home, Ambedkar  soon finished the book on the very same day wasting no time. Bheemrao’s life, notably, had so far been in great dilemma. Through the book Kaluskar did the work of showing him the light out of this darkness.

Actually since childhood the life of Babasahab Ambedkar had been one of being suffered with the pangs of castiest-disrespect. Owing to the intimate relationship between them this was not something Kaluskar knew not. Thus through the book he sowed the seed of inspiration in him for remaining in a faith ingrained with basic Indian ethos – that is Buddhism.

More so, one who earned the glory of being first Indian to have done PhD in Economics from London School of Commerce was Bheemrao Ambedkar. That who financially assisted in sending this great man from poor family to London was none other than the king, Sayaji Rao Gayakwad, of Baroda State. And one who inspired Sayaji for this humanitarian work was, yet again, Bheemrao’s Brahmin Guru, Krishnaji Arjun Kaluskar. So, not only grooming mentally, but practically also whenever Babasahab needed help Kaluskar fulfilled his part of role to his best

It is owing to this  mutual deep affection between  teacher and disciple that later on  whenever the efforts were made from Christian or Islamic forces to wean him away from Hinduism they all met with his stern rejection.

Ambedkar once said that-‘Adoption of Christianity will not bring about the destruction of discriminatory prone mindset. Whoever converted into Christianity in them there still prevail the distinction like Brahmin Christian, Maratha Christian, Mahar, Maang, Valmiki [scavengers] Christian. I will never adopt the religion that would pose danger to ancient culture of the country or will make untouchables anti-nationals. For, I am not interested in highlighting my name in the history as destructive.’ [Dr.Ambedkar Aur Samajik Kranti ki Yatra; page-278].

If we look into today’s scenario, it must be said that his assessment then was not out of fact. Just take note of the report of Tamilnadu Untouchable Eradication Front which was published in the year 2018. Report says  that it is common to see the separate chapels and graveyards in the villages  for Dalit Christians. In the administration of Churches; for the post of padres and in the educational-commercial activities concerning Churches that the Dalits suffer discrimination in the hands of high caste Christians such as Vanniayar and Nadar communities. In many cases they have to face even social-boycott.

As for Islam, his views regarding it could be assessed from his statement he made during partition-‘I want to tell Dalit community trapped in Pakistan that they should come to India  through whichever be the way and whatever be the source they get to have . Relying on Pakistan, Muslim league or the Muslims of the state of Nizam of Hyderabad would only lead to the destruction of Dalit community.[Dr.Ambedkar Aur Samajik Kranti ki Yatra; p-144]

Baba Sahab used to call education ‘the milk of lioness’. He had known that if in Dalit community the spirit of living with self-respect is to inculcate then  it is only possible through education. He thus formed ‘People education society’ and started Siddharth College. In the society founder members were S.C. Joshi, V.G. Joshi, Barrister Samarth, Mule and Chitre, all Brahmins.

Thus, because of his caste as he underwent personal and social disrespect on one hand and on the other the cooperation and love he gained time to time by a class of upper caste persons holding untouchability a stigma on humanity he concluded,‘ Organising Hindus is national work, and that is more important than Swaraj. More than the protection of Swaraj protecting the Hindus of Swaraj is important. If Hindus didn’t possess capability Swaraj would degenerate onto slavery yet again.’

E Rajesh Pathak is a BE in civil engineering, a certified creative writer and columnist with various magazines and papers.