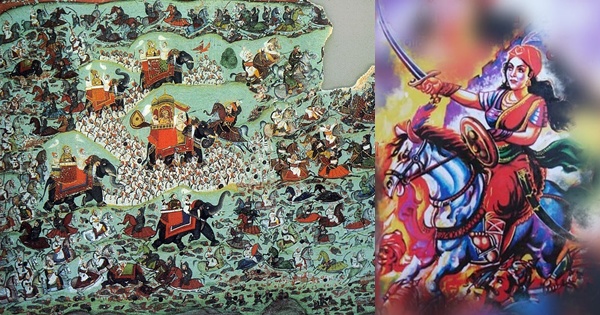 It is the ‘Break India – Divide India’ forces, who are ‘dalitising’ situations for vote gains and to create chaos and unrest across the country. In Sanskrit, ‘dalit’ means ‘oppressed’ and in Hindi, the term denotes ‘broken or scattered’. Dalit is thus no particular caste group, as perceived and coined. So any person, irrespective of creed, community, or religion, facing oppression, can be called a Dalit, but not a particular group of people.

No ancient records find mention of Dalit as any group of people. There was no caste system in ancient India. Our ancestors divided groups of people according to work (profession as we call today) under the varna system. According to the book Indica written by Megasthenes, the Greek ambassador to India around 300 BC, 7 types of division of labour have been described, not caste. The book documents India as a free society, indicating there were no slaves and no forced labor in Indian society.

Beginning 1100 AD, Islamic rule was established in the Indian sub continent. The Islamic rulers subjected Bharatiyas to the worst of oppression through loot, plunder, massacre, forced conversions, and what not, destroying Bharat Mata culturally, socially, and economically. And with British rule, Bharat Mata was further drained of her rich culture and resources. Their divide and rule policy was their biggest advantage. History is proof of how, over time, the ‘Bharatiyas’ themselves have been responsible for the destruction of Bharat by falling prey to the vicious net trap laid by ‘Break India’ forces. The British left India yet their ‘break and divide India’ influence hasn’t. Besides, distorted historical records which they have left behind and which find a prominent place in our History text books continue to influence minds, generation after generation.

The Bhima Koregaon incident triggered by ‘Break India’ forces has stained the ‘Bharatiyata’ of every Indian citizen. A group of 500 Mahar soldiers on foot indeed fought bravely and their valor is recorded in golden letters in History. But for whom did they fight? For the British against Bharatiyas, their own brothers and sisters by the soil! They fought under the British flag in 1818 against the Marathas. They did defeat the vastly superior forces of the Peshwa. Residents of Bhima Koregaon take pride of this victory. But is this victory to be celebrated with great pomp and show and the soldiers glorified at the national level? Had they fought against the British, their glory would seem justified. But even after 7-8 centuries of foreign oppression, they sided with the enemy against their own fellow brothers and sisters. And ‘Break India’ forces leaders like Jignesh Mevani, Umar Khalid are only following the golden ‘divide and break India’ rule of the British, playing the ‘Dalitisation’ card by promoting enmity between two groups and instigating violence.

I do not intend to use the term ‘Dalit’ here, which only stamps the identity of a particular group of people, discriminating them on caste in the modern context. Why stamp them as oppressed?  But going by the popular coinage of the term ‘Dalit’ (there should be a separate term, a dignified one, for classification), I seek your pardon to use it in this post. Here are five records of bravery that speak volume about the rich historical legacy of the Dalits. Their sacrifice, their valor, their glories should be celebrated with pride. I shall describe more of the records of their bravery in a separate post.

Rao Poonja, the chief of the Bhils in the Bhomat region of Mewar fought alongside Maharana Pratap, the Rana of Mewar in the Battle of Haldighati. The battle was fought against the Mughal emperor Akbar’s forces, led by Man Singh I in 1576. Poonja with his army of Bhils armed with short swords, arrows and bows, and stones led the rear. The heroics of the Bhils had stopped Mughal advance but the numbers dwindled fast.

Recently there was a big controversy regarding the outcome of Battle of Haldighati as to who was the winner and the consequences thereof. This controversy was triggered by the decision of the Rajasthan Education board to revisit the theory that Akbar won the battle easily. Actually various facts point contrary to this theory which has been spoon fed by history text books. These facts point that the battle was in fact a stalemate with both sides not being able to attain their objectives. Superior numerical strength of Mughals could not achieve them their glory as the valor of Mewar (with the support of Bhils) army denied them an outright victory.

Even after the battle of Haldighati, Poonja and the Bhils came forward time and time again, to fight against the enemy forces and for the freedom of Mewar. The state emblem of Mewar till today stands proof to the respect given to the Bhils. The emblem projects Rana Pratap and a Bhil standing on either side of the Eklingji (the titular deity of Mewar). Haldighati is today considered something close to a pilgrimage site.

Jhalkaribai was one of the commandants of the women army of Rani Lakshmibai of Jhansi. She was the Rani’s look-alike. She was born into a Koli family. She was married to Puran Singh, an artillery man from the Jhansi army unit. During her childhood, she herded cattle and had no formal education. Like the Rani, she was brave and underwent training in war weapons and horse riding. She killed a leopard with a herding stick in the forest when she was young. Knowing about her exploits, Rani Lakshmi Bai appointed her and further trained her.

The British under Lord Dalhousie rejected Damodar Rao’s claim to the throne of Jhansi, as he was adopted. They applied the Doctrine of Lapse and annexed Jhansi to their empire. Rani Lakshmi Bai ruled Jhansi peacefully from August 1857 to January 1858. Towards the third week of March 1858, the British forces, under Commander Hugh Rose, marched towards Jhansi. They ordered the Rani to surrender and threatened destruction of the fort and the town if she refused.

The battle between Rani Lakshmi Bai and the British forces began on 24thMarch 1858 and continued for 10 days until April 2nd.  Jhalkaribai played an active role in this battle. There were heavy casualties from both sides. At last British forces were able to penetrate the walls of the fort and into the fort and the palace.

It was Jhalkaribai who advised Lakshmi Bai to run away from the fort so that she accumulated a force outside. The witty Jhalkaribai herself offered to defend the fort unto death by disguising herself as the Rani. Disguised as the queen, she galloped in her horse towards the enemy. With her adopted son Damodar Rao tied to her back, Lakshmi Bai jumped down several feet from the fort and managed to escape. Jhalkaribai was caught and hanged to death by the British.

Jhalkaribai was a Dalit. But didn’t she rise to power owing to her skills? Jhalkaribai struck fear in the hearts of the British army. Through her role in the 1857 war of independence and for the freedom of Jhansi, through her valor and sacrifice, she has left behind a rich legacy for millions to emulate.

She played an instrumental role in the Indian war of independence in 1857. She led a troop of women sepoys against the British soldiers at Sikandar Bagh in Lucknow. A fierce battle took place here between Indian sepoys and the British; the latter were superior in arms and ammunition.

A brave and witty warrior, Uda Devi acted as a hidden sniper climbing onto a peepal tree unnoticed by the enemy soldiers. Positioning herself comfortably onto a branch, she started shooting at the advancing British soldiers in the battle of Sikandar Bagh. She shot dead 32 British soldiers and wounded many until a British soldier shot her and she fell down dead from the tree.

Madurai Veeran was a Dalit warrior from Tamil Nadu from the 17th century. He was also called the ‘protector of Madurai’. He protected Madurai from robbers, thieves, and possible attacks.

Today, Madurai Veeran is worshipped as a folk deity in Tamil Nadu. The then Pandyan king erected a shrine of Madurai Veeran at the south gate of Meenakshiamman Temple. People from all communities and caste worship him.

Why Dalits utter no word about him? Why media doesn’t broadcast such historical evidences?

Mahabiri Devi was a Bahujan woman in her twenties, hailing from Mundbhar in Mujaffarnagar, Uttar Pradesh. She inspired women in her village to fight for the freedom of India.

22 village women led by Mahabiri Devi formed a group and strategized to attack British soldiers. Their motto was kill the British or perish! They succeeded. They killed several British soldiers until all of the 22 freedom fighters were shot at by the British and martyred.

There are many more tales of Dalit valor. I would like to appeal to all our Dalit brothers and sisters, all sons and daughters of Bharat, to not stain their ‘Bharatiya’ identity, to not stain their rich historical legacy by joining the ‘Break India’ forces.