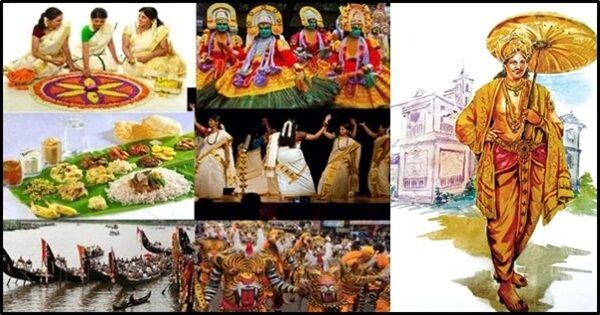 The Onam festival  is the most popular festival of Kerala. This festival is celebrated when Sun is in Simha Rashi. Onam, celebrated for 13 days, begins with Hasta Nakshatra and ends with Sravana nakshatra. It has been celebrated since last 11,100 years in Kerala in the honor of the beloved King Mahabali who was a just ruler and beloved of his subjects, the time when only the Hindus and followers of Sanatana Dharma existed in this land called Jambudwipa.  Interestingly, Jamshed-i-Nawroz is also celebrated for 13 days from Farvardin 1 to 13. Evidently, Indian Asura tradition and Zoroastrian Asura tradition had the common origin. This year Onam is celebrated from 12th Aug (Hasta) to 25th August 2021 (Sravana).

Sangam literature informs us that the great Pandyan king Nedunchelian (1850-1800 BCE) celebrated Onam or Thiruonam festival. According to legends, this festival is celebrated in the memory of King Mahabali who promised to return to Kerala every year. In all probability, the Vamana-Mahabali anecdote belongs to the era prior to the arrival of Parashurama in North Kerala. 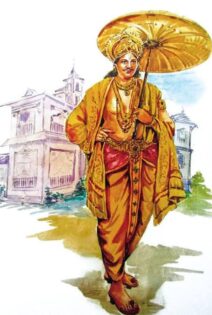 Mahabali  ruled in approx. 11,160 BCE [as per textual / astronomical evidences] in the Lands now called as Kerala. There are many versions of this legend in ancient texts such as the Shatapatha Brahmana, Ramayana, Mahabharata and Puranas. His legend is also a part of the annual Balipratipada (fourth day of Diwali) festival in the States of Gujarat, Maharashtra, Karnataka and Onam festival in the state of Kerala, India.

Mahabali belonged to the ‘KASHYAPA’ Gotra which is originally one of the eight primary gotras (clans) of the Brahmins, being derived from Kashyapa, from whom the eponymous gotra Brahmins believe to have descended. They are (1) Gautama Maharishi, (2) Bharadwaja, (3) Vishvamitra, (4) Jamadagni, (5) Vashista, (6) Kashyapa and (7) Atri . To this list, (8) Agastya is also often added. These eight sages are called gotrakarins, from whom all 49 gotras (especially of the Brahmins) have evolved, and every Brahmin anywhere in the world will trace his ancestry to this 8 groups.

In Bihar Shravani Pooja is celebrated . The Kuldevi is worshipped on this day . The four seasonal festivals namely Shravani, Vijayadashmi, Deepavali and Holi are meant for Brahman, Kshatriya, Vaishya and Shudras.

Hindu history has been peppered with  magical stories for the simple reason that the knowledge of texts and books were confined to learned class VARNA and the major population being illiterate were not privy to factual dates and therefore the magical element helped the general populace to understand, retain and relate their social identity to the legend. It was the VARNA system that flourished then which is not a caste system as propagated by Hindu haters of now (unfortunately whose ancestors were Hindus and would be ashamed of them if they were alive).

Mahabali is described in Puranic History as a benevolent and generous king, but violent and surrounded by asura associates who abused power. They particularly persecuted the suras and the Brahmins. Hiranyakashipu  was son of the famed Rishi Kashyapa and Diti, Prahlada the son of Hiranyakashipu and Kayadhu, and his wife gave birth to son was who was called Virochana. Virochana was father of Mahabali, and Mahabali was crowned king and known as a just ruler and beloved of his subjects. As they were born of male lineage of the famous Rishi Kashyapa their gotra was named ‘KASHYAPA’ Gotra. As known to all, the Gotras were defined specifically to allow genetically disease / retardation superior genes to be propagated through male lineage.

Mahabali also temporarily possessed the amrutam (nectar for eternal life) obtained by the asuras by trickery. The amrutam allowed his associates to bring him back to life after his death in one of the wars between suras and asuras.  Mahabali was, thus, immune from death. After many wars, the invincible Bali had won the heaven and earth. The suras (Devas) approach Vishnu to save them. Vishnu refused to join the war or kill his own devotee Mahabali. He used a tactical approach instead and incarnated as the dwarf Brahmin avatar, Vamana. While Mahabali was performing Ashvamedha Vedic yajna to celebrate his victories and giving away gifts to everyone, Vamana approached him and asked for “three steps of land”.

Mahabali granted him the gift. Vamana then revealed into Vishnu’s giant Trivikrama form, taking all of heaven in one step and earth in second. Mahabali realized that the Vamana was none other than Vishnu and offered his own head for the third step. Some Hindu texts state that Mahabali became the king of Sutala (a world more beautiful than Swarga, where Vishnu himself attended to Mahabali), some state he entered heaven with the touch of Vishnu, while another version states he became chiranjivi (immortal).

According to Hindu texts, Vishnu granted Bali a boon whereby he could return to earth every year. The harvest festivals of Balipratipada and Onam are celebrated to mark his yearly homecoming. Literature and inscriptions in Hindu temples suggest that these festivals, featuring colorful decorations, lighted lamps, gift giving, feasts and community events, have been popular in India for more than a twelve thousand years or so.

Though the ONAM is celebrated now in CHINGYAM masam it was previously celebrated in SHRAVANA masam or Karkidakam in Malayalam.  The chronological history of Asuras might have commenced around 14300 BCE. Considering the position of summer solstice at Dhanistha Nakshatra, Brahma and his son Svayambhuva Manu flourished around 14500-14400 BCE. Ketumala was the great grandson of Svayambhuva Manu.

King Mahabali, the grandson of Prahlada also flourished around 11150-11100 BCE. He also belonged to the tradition of Asuras. Therefore, Kerala used to celebrate the arrival of New Year from spring season. During 11150 BCE, spring season commenced when sun was in Simha Rashi. This is the reason why Onam festival is celebrated in the solar month of Chingham.

The word “Onam” is derived from Shronam i.e. Sravana. The month of Sravana was the first month of spring season around 11150 BCE. Thus, Sravana Utsav came to be known as Onam.  The Onam festival is celebrated for 13 days from Hasta nakshatra to Shatabhishaj nakshatra. Seemingly, Onam festival had commenced when Abhijit was still existed in the list of nakshatras.

THE ORIGIN OF JAMSHED-I-NAWROZ AND KERALA’S ONAM FESTIVAL

The Parsi community of Gujarat, Maharashtra and Karachi is celebrating Jamshedi Nawroz (ancient Zoroastrian New Year). Nawroz is the most ancient festival of Persia to mark the celebrations of the arrival of spring season.

According to traditional Zoroastrian history, Nawroz has been observed for more than 15000 years. Firdausi’s Shahnama relates that the legendary King Jamshed Jam conquered the world and ascended the throne at his capital Takht-i-Jamshed (Persepolis) 3100 years after Gayomart or Keyumars. He declared his coronation  day as Nawroz as the beginning of the Zoroastrian New Year. The name of Jamshed has been derived from the Avestan name “YamahXsaitah”.

As I have already explained, Avesta is the Asuraveda as mentioned in Gopatha Brahmana. Thus, Zoroastrianism has the legacy of Vedic Asuras, the cousin brothers of Devas of ancient India. According to Puranas, Agnidhra’s son Ketumala  reigned over the region of Afghanistan and Iran which came to be known as  Ketumala-Varsha. Probably, Keyumars has been derived from Ketumala. According to Zoroastrian sources, Ahur Mazda’s son Gayomart (Keyumars) lived for 3000 years. Thereafter, Ahura Mazda gave Gayomart the boon of sleep for respite from the onslaught of Ahriman (Ahirmanyu i.e. Indra or Vishnu). But after 30 years of attacks, Ahriman destroyed Gayomart. This story of Gayomart has some similarities with the legend of Gayasura in which Brahma, Vishnu and Shiva asked Gayasura lie on his back on the ground without moving his body for seven days but he was tricked to move his body and got killed.

Based on the identification of Gayomart, the son of Ahur Mazda with Gayasura, the son of Tripurasura, we can roughly fix the date of Gayasura, a contemporary of Shiva (11290-11200 BCE) around 11300-250 BCE. The date of King Jamshed Jam can also be fixed around 11150 BCE. Since the time span of 3030 years had elapsed up to the death of Gayomart, the chronological history of Asuras might have commenced around 14300 BCE. Considering the position of summer solstice at Dhanistha Nakshatra, Brahma and his son Svayambhuva Manu flourished around 14500-14400 BCE. Ketumala was the great grandson of Svayambhuva Manu. Thus, the date of Ketumala can be roughly fixed around 14350-14300 BCE. In all probability, Ketumala i.e. Keyumars was the progenitor of Zoroastrians.

Devas and Asuras were the cousin brothers but became political rivals since early Vedic period. Devas followed a calendar that commenced from summer solstice at Dhanishtha nakshatra whereas Asuras followed a calendar that commenced from winter solstice at Ashlesha naskhatra. Taittiriya Brahmana indirectly indicates the ancient calendar of asuras and mentions that during the conflict between the Devas and the Asuras, the Devas offered oblation to Sarpas i.e. Ashleshānakshatra and successfully subdued the perpetual hatred of their cousin brothers. Gradually, the lunisolar calendar of Devas shifted to Sharad season and the lunisolar calendar of Asuras shifted to spring season around 11300 BCE. Thus, King Jamshed introduced the celebration of Nawroz around 11150 BCE. At that time, spring season was
coincided with the sun’s entry into SimhaRashi (Leo). Old Persian Jamshedi or Shahanshahi luni solar calendar traditionally followed the date of Nawroz from the time of Jamshed but spring season shifted from Leo to Aries during the time of Achaemanid King Cyrus. According to legends, King In-Su-Kush-Siranna had also celebratedNawroz 2000 years before Cyrus. He was the king of Aratta Kingdom.  Most probably, he flourished during the era of Mahabharata. Mahabharata refers to  Aratta Kingdom.

Though Nawroz is the celebration of the arrival of spring season but Zoroastrians  traditionally preserved the date of King Jamshed’s coronation. This may be the  reason why traditionalists celebrate the Jamshed-i-Nawroz when Sun in Simha Rashi whereas the others celebrate Nawroz from the sun’s entry into Aries.