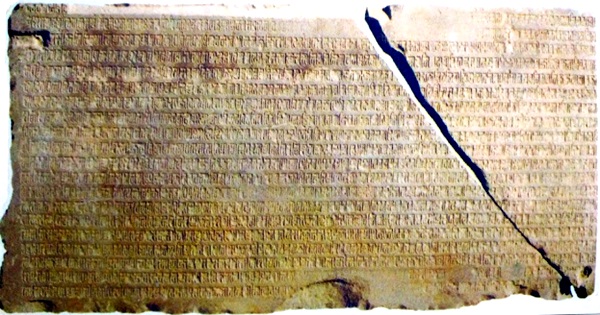 The most important of the evidences on Ram Janambhoomi deciphered so far is the Hari-Vishnu inscription (above image) that clinches the whole issue of the temple. It is written in 12th century CE Devanagari script and belongs therefore to the period before the onslaught of the Ghorids (1192 AD and later). SP Gupta, who was part of the excavations team, tells us:

“This inscription, running in as many as 20 lines, is found engraved on a 5 ft. long, 2 ft. broad and 2.5 inches thick slab of buff sandstone, apparently a very heavy tablet. Three-fourths of the tablet is found obliterated anciently. The last line is also not complete since it was anciently subjected to chipping off. A portion of the central part is found battered, maybe someone tried to deface it anciently. The patination [tarnishing including wearout] is, however, uniform all over the surface, even in areas where once there were inscriptions.”

It was examined by Ajay Mitra Shastri, Chairman of the Epigraphical Society of India. Shastri gave the following summary. What the inscription tells us is of monumental significance to the history of Medieval India.

The inscription is composed in high-flown Sanskrit verse, except for a very small portion in prose, and is engraved in chaste and classical Nagari script of the eleventh-twelfth century AD. It has yet to be fully deciphered, but the portions which have been fully deciphered and read are of great historical significance and value … [It has since been fully deciphered.] It was evidently put up on the wall of the temple, the construction of which is recorded in the text inscribed on it. Line 15 of this inscription, for example, clearly tells us that a beautiful temple of Vishnu-Hari, built with heaps of stones … , and beautified with a golden spire … unparalleled by any other temple built by earlier kings … This wonderful temple … was built in the temple-city of Ayodhya situated in Saketamandala. … Line 19 describes god Vishnu as destroying king Bali … and the ten headed personage (Dashanana, i.e., Ravana). (op. cit. 119; emphasis mine. Original Sanskrit quotes given by Shastri are left out.)

Need we say more — a temple for Hari-Vishnu who killed the ten-headed Ravana, in Ram Janambhoomi, the temple city of Ayodhya? So Ayodhya was known as a temple city even then; Saketa was the ancient name of the district. The inscription confirms what archaeologists Lal and Gupta had earlier found about the existence of a temple complex. And yet the Secularists and their allies have been telling the world that there was no temple!

1. Guru Nanak, according to Bhai Man Singh’s Pothi Janam Sakhi, said to have been composed in 1787 Anno Vikrami/1730 A.D., visited Ayodhya and said to his Muslim disciple Mardana: ‘Mardania! eh Ajudhia nagari Sri Ramachandraji Ji ki hai. So, chal, iska darsan kari’e. Translation: ‘Mardana! this Ayodhya city belongs to Sri Ramachandra Ji. So let us have its darsana.’ This indicates that Nanak visited Ayodhya shortly before the destruction of the Rama temple by Babar. Man Singh’s book was written two hundred years later, which means that he was drawing upon existing traditions or some other source relating to Nanak’s visit to Ayodhya. But another work by Baba Sukhbasi Ram gives a similar account, again suggesting that Nanak visited Ayodyha before the temple was destroyed by his contemporary, the invader Babar whose atrocities he condemned. ‘These kings are nothing but butchers’ said Nanak, referring to the Moghuls and others in his time.

2. All relevant British government records followed by District Gazetteer of Faizabad compiled and published by the Congress government in 1960 declare with one voice that the so-called Babri mosque at Ayodhya is standing on the debris of a Ram Janambhoomi temple demolished by the order of Babar in 1528.

3. In 1855, Amir Ali Amethawi led a Jihad (Islamic religious war) for the recapture of Hanuman Garhi, situated a few hundred yards from the Babri Masjid which at that time was in the possession of Hindus. This Jihad took place during the reign of Nawab Wajid Ali Shah. It ended in failure. A Muslim writer, one Mirza Jan, was a participant in that failed Jihad. His book Hadiqah-i-Shuhada was published in 1856, i.e. the year following the attempted Jihad. Miza Jan tells us:

“… wherever they found magnificent temples of the Hindus ever since the establishment of Sayyid Salar Mas’ud Ghazi’s rule, the Muslim rulers in India built mosques, monasteries, and inns, appointed mu’azzins, teachers and store-stewards, spread Islam vigorously, and vanquished the Kafirs. Likewise they cleared up Faizabad and Avadh, too from the filth of reprobation (infidelity), because it was a great centre of worship and capital of Rama’s father. Where there stood a great temple (of Ramajanmasthan), there they built a big mosque, … Hence what a lofty mosque was built there by king Babar in 923 A.H. (1528 A.D.), under the patronage of Musa Ashiqqan! (Harsh Narain: p 105).”

4. Tarikh-i-Avadhi, by one Alama Muhammad Najamulghani Khan Rampuri (1909) tells us:

Babar built a magnificent mosque at the spot where the temple of Janmasthan of Ramachandra was situated in Ayodhya, under the patronage of Saiyad Ashikhan, and Sita-ki-Rasoi is situated adjascent to it. The date of construction of the mosque is Khair Baqi (923 AH) [or 1528 AD with the correction]. Till date, it is known as Sita ki Rasoi. By its side stands that temple. It is said at the time of the conquest of Islam there were three temples, viz. Janmasthan, which was the birthplace of Ram Chanderji, Swargadwar alias Ram Darbar, and Treta ka Thakur. Babar built the mosque having demolished Janmasthan. (History versus Casuistry, p 17; emphasis added.)

5. A Persian text known as Sahifah-i-Chihal Nasa’ih Bahadurshahi written in 1707 by a grand-daughter of the Moghul emperor Aurangazeb, and noted by Mirza Jan in his Urdu work Hadiqah-i Shuhada previously cited. Mirza Jan quotes several lines from it which tell us:

… keeping the triumph of Islam in view, devout Muslim rulers should keep all idolaters in subjection to Islam, brook no laxity in realization of Jizyah, grant no exceptions to Hindu Rajahs from dancing attendance on ‘Id days and waiting on foot outside mosques till end of prayer … and ‘keep in constant use for Friday and congregational prayer the mosques built up after demolishing the temples of the idolatrous Hindus situated at Mathura, Banaras and Avadh … (Harsh Narain: pp 23-24; emphasis added.)

6. Archaeological Survey of India Report, 1891, pp 296-297 records: ‘Mir Khan built a masjid in A.H. 930 during the reign of Babar, which still bears his name. This old temple must have been a fine one, for many of its columns have been utilized by the Musalmans in the construction of Babar’s Masjid.’

H.R. Neville in the Barabanki District Gazetteer, Lucknow, 1905, pp 168-169, writes that the Ram Janambhoomi temple ‘was destroyed by Babar and replaced by a mosque.’ Neville, in his Fyzabad District Gazetteer, Lucknow, 1905, pp 172-177 further tells us; ‘The Janmasthan was in Ramkot and marked the birthplace of Rama. In 1528 A.D. Babar came to Ayodhya and halted here for a week. He destroyed the ancient temple and on its site built a mosque, still known as Babar’s mosque. The materials of the old structure [i.e., the temple] were largely employed, and many of the columns were in good preservation.’ [Again supported by archaeological finds.]

7. The Imperial Gazetteer of Faizabad (1881) confirms the construction of three Moghul mosques at Ayodhya on the site of three celebrated shrines: Janmasthan, Swargadwar and Treta-ka-Thakur. Archaeological Survey of India tells us that Mir Khan (on Babar’s orders) built the mosque at Janmasthan using many of its columns. Aurangazeb had the other two mosques built. We see therefore that demolition of temples and replacing them with mosques was a systematic practice under Moghuls. It was simply a continuation of earlier policies of all Muslim rulers as both Hindu and Muslim records testify.

The Babri Mosque was known also as the ‘Janmashtan Masjid’ even to the Muslims! Obviously they believed it to be the birthplace of Rama — not Babar. We shall see later that until the Secularists showed them the value of it, the Muslims never used Negationism; far from it, they took great pride in their record of vandalization of Hindu sacred places. To continue with Gupta’s account:

At Ayodhya, Professor Lal took as many as 14 trenches at different places to ascertain the antiquity of the Ram Janambhoomi site. It was then found that the history of the township was at least three thousand years old, if not more … . When seen in the light of 20 black stone pillars, 16 of which were found re-used and standing in position as corner stones of piers for the disputed domed structure of the ‘mosque’, Prof. Lal felt that the pillar bases may have belonged to a Hindu temple built on archaeological levels formed prior to 13th century AD …

On further stratigraphic and other evidence, Lal concluded that the pillar bases must have belonged to a Hindu temple that stood between 12th and the 16th centuries. “He also found a door-jamb carved with Hindu icons and decorative motifs of yakshas, yakshis, kirtimukhas, purnaghattas, double lotus flowers etc.”