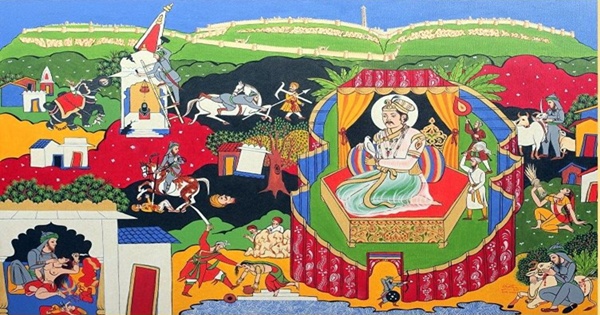 Only one jauhar in general is known to people in name of Sati Mata Rani Padmini. Many times jauhar has been the blood soaked historical tales of valor and sacrifice which has brought glory to the soil of Rajasthan, and thereby of Maa Bharti. Chittorgarh has been witness to three biggest destruction of Hindu culture and people. The Rajputinis, to save their honor, committed jauhar, because even dead body was not spared by the invaders of necrophilic tendencies.

The second destruction of Chittorgarh was done by Akbar. Falsely called ‘THE GREAT’, Akbar spent almost all his reigning life in war. He wanted to conquer Mewar, which was being ruled by Rana Uday Singh, the 53rd ruler of the Mewar dynasty and the fourth son of Rana Sanga and Rani Karnavati. Do you know Akbar ordered slaughter of 40,000 Rajput women and children of Chittorgarh?

Kunwar Shakti Singh, son of the Rana who had quarreled with his father, had run away and approached Akbar when the latter was camping at Dholpur and preparing to attack Malwa. During one of these meetings, in August 1567, Shakti Singh came to know from a remark made in jest by emperor Akbar that he was intending to wage war against Chittor.

Akbar had told Shakti Singh in jest that since his father had not submitted himself before him like other princes and chieftains of the region he would attack him. Startled by this revelation, Shakti Singh quietly rushed back to Chittor and informed his father of the impending invasion by Akbar. Akbar was furious with the departure of Shakti Singh and decided to attack Mewar to humble the arrogance of the Ranas.

According to an account by Shyamaldas Dadhavadhia, a 19th century writer who documented the history and culture of the Rajasthan, Udai Singh called a council of war where he discussed with his ministers about the possible invasion by Akbar. The nobles advised him to take refuge along with the princes in the hills of Udaipur. They also advised him to leave a garrison at Chittor.

In September 1567, the emperor left for Chittor, and on October 20, 1567, camped in the vast plains outside the fort. In the meantime, Rana Uday Singh, on the advice of his council of advisors, decided to go away from Chittor to the hills of Udaipur. Jaimal and Patta, two brave army chieftains of Mewar, were left behind to defend the fort along with 8,000 Rajput warriors under their command. Akbar laid siege of the fortress.

The Rajput army fought valiantly and Akbar himself had narrowly escaped death. In this grave situation, Akbar had prayed for divine help for achieving victory and vowed to visit the shrine of the sufi saint Khwaja at Ajmer. On that day Jaimal was seriously wounded but he continued to fight with support from Patta.

Jaimal Rathore and Fatta Sisodiya ordered jauhar to be performed where princes and princesses of Mewar and noble matrons committed self-immolation at the funeral pyre. Approximately 8,000 women burned themselves to prevent Islamic rape and indignity, in the night of February 22, 1568 AD . The women who committed jauhar perished but their memory has been kept alive till today by bards and songs which glorify their act, which was right in those days and circumstances.

Next day the gates of the fort were opened and Rajput soldiers charged out bravely to fight the enemies committing Shaakh. Each soldier got dressed in kesariya (saffron) robes and turbans and exchanged paan [betel leaves] amongst themselves as a sign of parting. Jaimal and Patta, who fought bravely, were at last killed in action. Akbar thus captured Chittor after a four-month-long siege on 23 February 1568. Akbar, furious that the siege took so long, ordered the slaughter of more than 40,000 unarmed old men, women and children of CHITTORGARH . Abul Faz’l has given a true account of the event as seen by Akbar in his biography in 1568 AD. According to the various contemporary accounts by Abul Fazl, Badauni, etc, there were between 22,000 and 40,000 women, children, and the old and infirm still alive inside the fort when Akbar’s army entered it. The Mughal emperor ordered the massacre of the defenseless Rajputs and Rajputinis including children.

The need to know our history is not to spread hate, but to appreciate the sacrifice and learn from it, so in this current generation we strive to stop repeating those mistakes and injustice in the name of religion, race, colour, caste, etc.

First Slaughter of Chittorgarh by Allauddin Khilji in 1303.

Second Slaughter ‘SHAAKH’ of Chittorgarh in 1534 and Forgotten Jauhar of Rani Karnavati.

How Ancient Chittor Fort Was Witness to its Rise, Plunder and 3 Jauhars