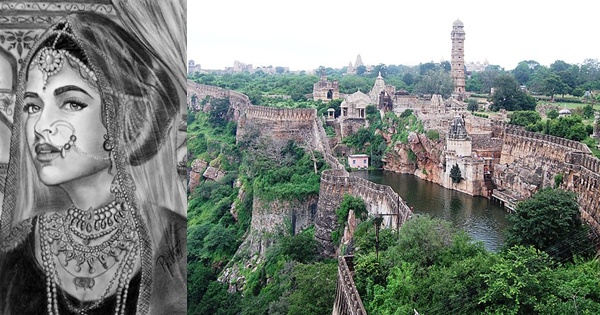 Visualize about Chittorgarh of the bygone days when the brave Rajputs fought fiercely against Muslim invaders to maintain independence. The Rajputs who never surrendered! Picturise about the brave Rajput women who committed jauhar on more than one occasion to save themselves from disgrace, from being raped by the barbaric Muslim invaders.

During the reign of Alauddin Khilji, Mewar was ruled by Rawal Ratan Singh. Mewar’s defense was the formidable and well fortified Chittor Fort, built during the 7th century. This fort, spread across 700 acres the fort, had stood robust against the tides of time and attacks! Chittor Fort is the largest fort in India and Asia.

Rani Padmini or Padmavati spent her life in Singhal under the care of her father Gandharvsen and mother Champavati. Her father arranged a swayamvara and invited all the Hindu kings and Rajputs show their eligibility. Malkhan Singh, a king from a small kingdom also came to her swayamvara to marry her. Rawal Ratan Singh of Chittorgarh who had another queen Nagmati, also went to Singhal, defeated Malkhan Singh and married Padmini as the winner of the swayamvara. He returned to Chittor with his beautiful second queen Padmini.

Alauddin Khilji heard a lot about the lucrative mines of Zawar, Dariba, and Agucha. Mining of zinc, silver, and other precious metals in these places were the talk of nearby areas and far-off places. Khilji himself marched towards Chittor Fort to defeat Rawal Ratan Singh so that he could grab the rich mines.

But to his dismay, on reaching Chittor, Alauddin found Chittorgarh Fort to be heavily defended. The Delhi Sultanate arrived at the gates and demanded the Rajputs to surrender. The king was called to come and negotiate. An angry Rawal Ratan Singh refused to surrender though he knew he was too small a force against Khilji. He asked the Sultan to ask for ransom money and leave or else the Rajputs would give them a taste of their steel and if needed fight to death!!!

Alauddin Khilji returned to his camp. The next day he asked for a negotiation. He himself approached the king with his security guards at the gate. Rawal Ratan Singh accepted Khilji’s invite for negotiations. While the negotiations were on, Khilji’s men deceitfully killed the king’s guards and took him prisoner. Khilji wanted to annex the kingdom by force. Before they could enter the inner fort, the gates were shut.

The next day Songara Chauhan Rajput generals Gora and Badal decided to beat the Sultan following his own game sent a messenger to Khilji that women would come to meet the king in the morning. On the following day at the crack of dawn, one hundred and fifty palanquins (covered seat enclosed in curtains on which royal ladies were carried in medieval times on poles held parallel to the ground on the shoulders of two or four people) left the fort and made their way towards Alauddin Khilji’s camps.

The palanquins stopped before the tent where king Ratan Singh was being held prisoner. Seeing that the palanquins had come from Chittorgarh; and thinking that they had brought along with them his queen, King Ratan Singh was mortified. But to his surprise from the palanquins came out, not his queen and her maid servants, but fully armed soldiers who quickly freed Ratan Singh and galloped away towards Chittor on horses grabbed from Alauddin’s stables. Gora fought bravely during the skirmish and laid down his life while Badal was able to take the Rana safely to the fort.

On hearing that his designs had been frustrated, the Sultan was furious and ordered his army to storm Chittor. However, the Sultan’s army could not break into the fort. Then Alauddin decided to lay siege of the fort. The siege was a long drawn one and gradually supplies within the fort were depleted. Finally King Ratan Singh gave orders that the Rajputs would open the gates and fight to death with the besieging troops. On hearing of this decision, Padmini decided that with their men-folk going into the unequal struggle with the Sultan’s army in which they were sure to perish, the women of Chittor had either to commit the divine suicide jauhar or face dishonour at the hands of the victorious enemy.

The choice was in favour of suicide through jauhar. A huge pyre was lit and all the women of Chittorgarh jumped into the flames following their queen, thus depriving the enemy waiting outside. Each soldier got dressed in kesari robes and turbans and exchanged pan amongst themselves.

They charged out of the fort and fought bravely with Sultan and his army until all of them perished. After this pyrrhic victory, the Sultan’s troops entered the fort only to be confronted with ashes and burnt bones. IT IS SAID FOR 6 MONTHS THE AIR IN CHITTORGARH STANK OF DEAD BODIES from JAUHAR. The women who committed jauhar perished but their memory has been kept alive till today by bards and songs which glorify their act, which was right in those days and circumstances.

The siege of Chittorgarh, its brave defence by the Guhilas, the saga of Rani Padmini and the jauhar she led are legendary. This incident has had a defining impact upon the Rajput character and is now insulted by a group of ‘Bhaands’- singer and musician community from Bollywood.