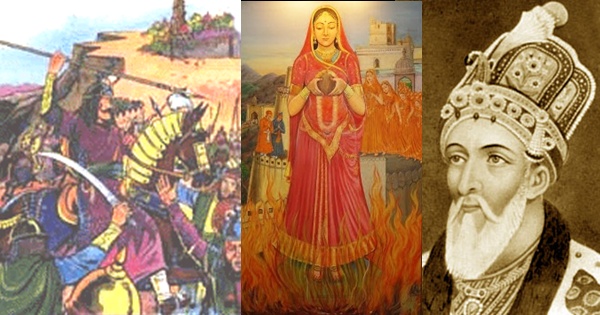 Only one jauhar in general is known to people in name of Sati Mata Rani Padmini. Many times jauhar has been the blood soaked historical tales of valor and sacrifice which has brought glory to the soil of Rajasthan, and thereby of Maa Bharti. Chittorgarh has been witness to three biggest destruction of Hindu culture and people. The Rajputinis, to save their honor, committed jauhar, because even dead body was not spared by the invaders of necrophilic tendencies.

Sadly, the fate of civilians in war has often been harsh, perhaps even more so in the past. Men would invariably be killed, and children were often sold into slavery. As for the women, they were mass raped and then killed, and sometimes taken as prizes by the victors to be used as sex slaves and then sold. One practice was developed by the Rajputs of India in order to prevent such a fate befalling their queens and noble women. This rite was called jauhar. The jauhar would be performed when the Rajputs saw no hope of victory over their enemies.

Although jauhar is related to the more well-known historical Indian practice of Sati (the self-immolation of widows on their deceased husbands’ funeral pyres), there are some important differences between the two. Jauhar was only carried out during a war, involved not only women but also children, and was committed when both husband and wife were still alive.

During the jauhar, which was said to take place during the night, Brahmin priests would chant Vedic mantras, and the Rajput women, wearing their wedding dresses, would commit suicide with their children via self-immolation. On the morning after the Jauhar, the men would carry out the Shaakh. After taking a bath, the men would wear saffron clothes, smear the ashes of their wives and children on their foreheads, and put tulsi leaves in their mouths. Then, they would sally out either to annihilate their enemies or be annihilated by them.

It has been recorded that the jauhar and shaakh were never carried out when the Rajputs were at war with other Hindus, such as the Marathas, as the defeated could always expect to be treated with dignity. It has also been claimed that on several occasions, the Rajputs sued for peace, and the Mughals agreed to their terms. When the Rajputs, their wives and children came to surrender, however, they were slaughtered by the Mughals. This treachery and deceit is the reason for the jauhar and shaakh to be established by the Rajputs.

The Second Shaakh and Jauhar (slaughter) of Chittorgarh

Sati Mata Rani Karnavati hailed from Bundi, a kingdom in Rajasthan surrounded by hills of the Aravalli Range. She was married to Rana Sangram Singh, known as Rana Sanga of the Sisodia dynasty of Chittorgarh, the capital of Mewar kingdom. The couple had two sons – Vikramjit and Uday Singh.

Rana Sanga ruled between 1508 and 1528. He was a daring and courageous warrior who quickly started to expand his territories. This expansion brought him in direct conflict with the Lodhi dynasty of Delhi. Rana Sanga destroyed the Lodhi army of Delhi Sultanate and even captured a Lodhi prince in the battle of Khatoli in the year 1518. This battle lasted for just around 5 hours. These 5 hours were a nightmare for the Lodhis which they could never forget. This battle crippled the Lodhi army to such an extent that they could not challenge Sanga again for a while. This battle also gave Mewar control over north eastern Rajasthan. Rana Sanga was wounded in this battle but that did not deter his courage from taking part in further battles. He lost an arm by a sword cut and an arrow made him lame for life. He was already blind by one eye before his coronation.

The first Mughal emperor Babur had captured the throne of Delhi in 1526. A year later, i.e. in 1527, Rana Sanga of Mewar led a confederation of Rajput rulers against him. A fierce battle took place in Khanua. Rana Sanga died of his wounds, leaving Rani Karnavati a widow and regent of Chittorgarh in the name of her elder son Vikramjit.

Qutb-ud-Din Bahadur Shah of the Muzaffarid dynasty was the Sultan of Gujarat during this period. He ascended the throne after competing with his brothers in 1526. Sensing opportunity, Bahadur Shah attacked the Mewar kingdom with a huge army. Mewar was known to be rich in minerals and the Sultan had his eyes on this resource. Rani Karnavati appealed to the other Rajput rulers to help defend the honour of Chittorgarh. The rulers agreed. They advised the Rani to send the princes Vikramjit and Uday Singh to their maternal home in Bundi during the war for their personal safety.

Rani Karnavati then prepared to face Bahadur Shah. At first she tried diplomacy, offering him the spoils of Chittorgarh’s defeat of Malwa. This worked initially, but Bahadur Shah returned in 1534, all determined to take the fort.

The Rajputs were ready to fight to death with the besieging troops. Each soldier got dressed in kesariya (saffron) robes and turbans and exchanged paan [betel leaves] amongst themselves as a sign of parting. They charged out of the fort and fought bravely with Sultan and his army until all of them perished. Realising that defeat was imminent, Karnavati decided that with their men-folk going into the unequal struggle with the Sultan’s army in which they were sure to perish, the women of Chittor had either to commit the divine suicide jauhar or face dishonor of necrophilia  at the hands of the victorious enemy. The choice was in favour of suicide through jauhar. A huge pyre was lit and all the women of Chittorgarh led by Rani Karnavati jumped into the flames, thus depriving the enemy waiting outside.

After this victory, the Sultan’s troops entered the fort only to be confronted with ashes and burnt bones. It was March 8, 1535 A.D. Karnavati’s maid Panna Dhai escaped with the princes Vikramjit and Uday Singh to safety.

The women who committed jauhar perished but their memory has been kept alive till today by bards and songs which glorify their act, which was right in those days and circumstances. The siege of Chittorgarh, its brave defence by the Rajputs, the saga of Rani Karnavati and the jauhar she led are legendary.

This was the second SHAAKH of Chittorgarh!!

Click to read the First Slaughter of Chittorgarh by Allauddin Khilji in 1303.