How Ancient Chittor Fort Was Witness to its Rise, Plunder and 3 Jauhars 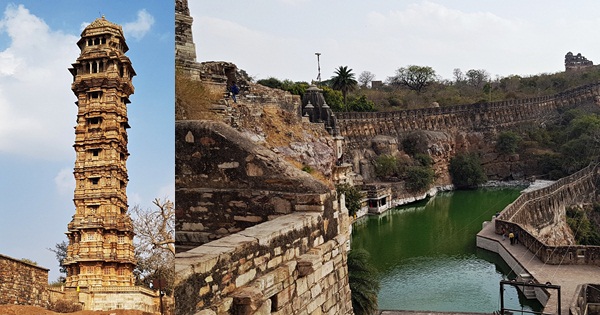 Chittor  Fort, or rather what is left of it, is now a UNESCO World Heritage site. It dates back so many years that it is not completely clear as to who built it but most historians attribute it to Mauryan Kings and that’s what our local guide said as well. This hill fort is the largest fort in India, covering a whopping 700 acres. It has a dizzying history replete with both splendour, affluence, beauty and wars, sieges, bloodshed and unimaginable suffering. The walls of this fort have been witness to three jauhars.

Around 700 CE Chittor Fort fell in the hands of the Guhila rulers, who thereafter ruled for the next about 500 years. At this time, the Delhi Sultanate was ruled by the despotic and ruthless Alauddin Khilji, who descended upon the fort sometime in the early 1300s and laid siege to it. The siege lasted six to eight months, and ended when the king, Raja Ratan Singh was tricked into captivity. Khilji then announced that the Raja would only be released if queen Padmini was handed over to him. The queen agreed, but with the condition that she would be accompanied by 700 of her female companions. 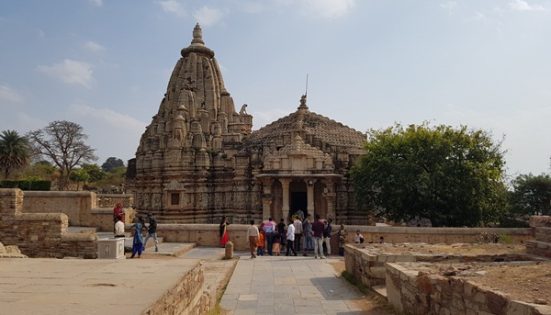 The Rani then went with 700 soldiers, all dressed as women, and with that small but efficient army, she carried out the daring rescue of her husband and King, and thereafter, moved back to Chittor Fort. A furious Khilji could not stomach this insult and he raised an army ten times as large and again attacked fort. After a heroic resistance, the fort fell into Khilji’s hands, and Raja Ratan Singh and his army perished, fighting to the very bitter end.

Rani Padmini chose self-immolation, consigning her body to the flames along with the womenfolk, rather than submit to humiliation and dishonour. Thus, the first Jauhar took place in this land of the brave. 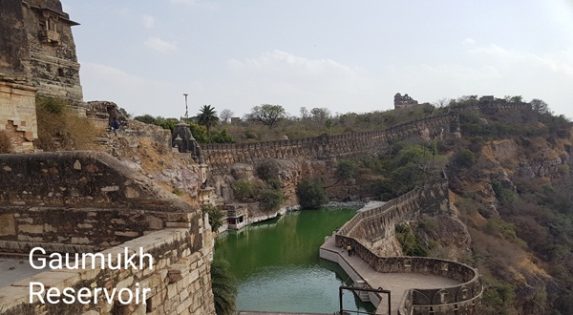 For Khilji, the victory was a bitter pill to swallow, for it could never be complete without getting Rani Padmini for his own. Psychologically traumatised, he went berserk and ordered his men to destroy every structure within the fort boundaries. Temples, residences, palaces, stables—everything was uprooted and destroyed. Even today, the massive spread of empty spaces with only rocks strewn everywhere, stand testimony to the havoc that only a bigoted mind could conceive. The rocks and stones scattered across the land whisper the secrets of what once was a place of great architectural beauty and wonder, and now lie forlorn, for some curious eyes to see.

The victory of the Delhi Sultan was however short lived and another Rajput clan won back Chittor Fort in a few years. By 1311 CE, it was under the rule of King Maldeva. He lost it to Raja Hammir Singh and from then on Chittor began to thrive again. Half a century later, the brave Rana Kumbha would inherit the fort and take it to unimaginable heights. In his lifetime, all his forts were impenetrable. 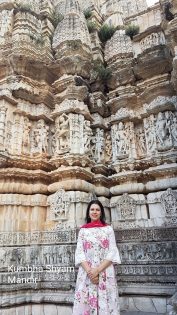 The author at Kumbha Shyam Mandir in Chittor Fort

Rana Sanga’s wife, Rani Karnawati, reached out to emperor Humayun with a rakhi, which he accepted and agreed to fight beside her armies. Bahadur Shah was aware that with Humayun against him, he would never be successful in his siege and hence, immediately warned Humayun, that this war is jihad and that he must not go against his religion for kafirs. The Rajputs always had the option of accepting subjugation to the Mughal powers, like so many other Indian Kings had, but it was unacceptable to them. They chose saka (death by war) over leading a life of humiliation as mere vassals. The war that followed was a brutal bloodbath, leaving the Rajput army completely annihilated yet again. Over 13,000 women including Rani Karnavati committed jauhar preferring death over life of sexual slavery and humiliation.

Many years later, a final siege was made by Akbar. At that time Akbar was at the zenith of his power and a four month long siege was followed by yet another massacre of the Chittor army and the third jauhar by the women. Akbar, and thereafter his heirs ruled for many decades, till 1616, when after a Rajput-Muslim peace treaty, Chittor Fort reverted to the hands of the Rajputs during the reign of Jehangir. But the King, Raja Amar Singh, wasn’t permitted to rebuild the fort, as the Mughals feared that it would become a threat to them. 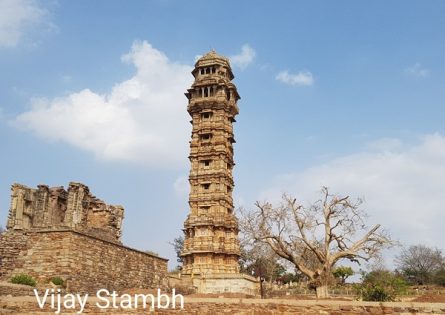 The Kings palace, the treasury, the stables and most of what used to be is now in ruins. Rani Padmavati’s summer palace, the Jal Mahal, a simple three story structure located in the middle of a lotus pond still remains today, as it was reconstructed at a later date. Over twenty two water bodies have survived from the 84 that once existed. A large water body close to the fort is believed to have been created by the strongest Pandav brother, Bhim and is called Bhimlat Kund.

Chittor Fort has seven gateways (pols), all built by Rana Kumbha during his reign. As one ascends up the hill towards the fort, one crosses each one of them, starting from the Padan Pol and ending with the main gate, the Ram Pol. There is so much to see on arriving. We visited the Meera Bai Mandir first. Though a Krishna Mandir, it is now popularly called Meera Bai Mandir. After the death of her husband, Raja Bhojraj Singh, she had left the palace and moved to this mandir. It was this very mandir where she was made to drink poison, which turned to nectar in her hands. Next to it is a larger Krishna Mandir which was built by Rana Kumbha and has hence been named Kumbha Shyam Mandir. The Kirti Stambh, dedicated to the Jain tirthankar, Adinath is still beautiful today, with a much of the carvings having escaped deliberate defacing of the murtis of deities. 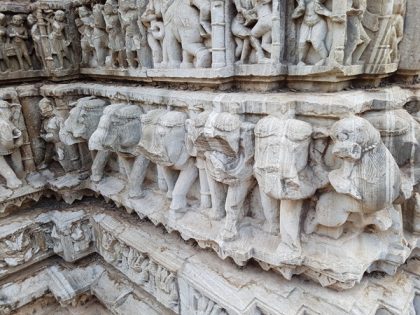 Carvings in a temple wall in Chittor Fort premise

Vijay Stambh, the tower of victory stands tall even today. It was erected by Rana Kumbha, to commemorate his victory over the Mughal rulers of Malwa. It is one of the major attractions. This stunning nine story stone structure with magnificent carvings of Hindu Gods and from Hindu scriptures, offers a breath taking view of the city from the top. It is currently closed for further restoration.

There is much more to see there; temples, water bodies, palace ruins… interestingly some of the descendants of Rana Kumbha’s army still live here.If you visit this place, definitely get a guide, there is just too much history which you will miss otherwise. The best part about this fort is that one can drive around from end to end. So the major historical sites spread over the 700 acres can be covered in a visit. 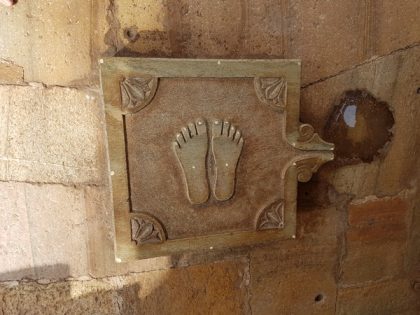 As for the Jauhar Sthal, which used to be a wide and deep open pit, today it has been filled up and transformed into a lush green lawn, on ground level. The Vijay Stambh which was erected next to it appears as if to watch over it day and night. Every year a Jauhar Mela is held to commemorate the memory of the brave warriors who fought defending it. A havan is conducted by successive kings for the peace of the souls of the thousands of women who chose to give up their lives for sake of their pride and dignity.

At the end of the day as we drove away, the history of the fort kept coming back to me. If there’s one thing it told me, it’s the impermanence of everything that makes up life. 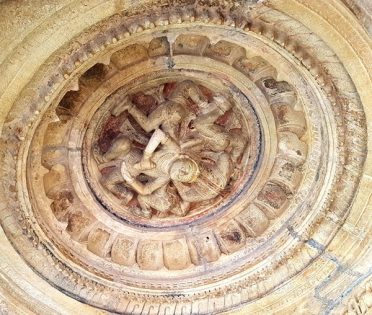 The article was first published at salute.co.in.

All images clicked by the author.