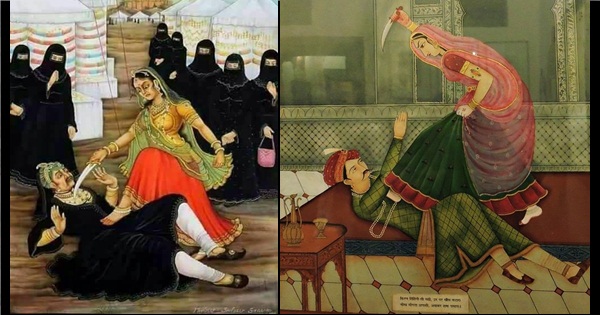 Kiran Devi Rathore! A painting of the brave Rajput queen stamping her feet on Akbar’s chest with her dagger on his neck is displayed at the Jaipur Museum. She is a familiar name in Bikaner in particular and Rajasthan in general, but hardly known across the country. She grounded and humiliated Mughal ruler Akbar when he tried to misbehave with her. Had Akbar not begged or pleaded for his life, History of India would have changed course! Because Indians always followed the rules of Dharma, pardoning whoever begged for pardon. And Kiran Devi Rathore followed it.

The valor of women in India since ancient times is unprecedented. Women since ancient times enjoyed equal status with men. They were educated. They were trained in the art of warfare by choice. The Rigveda finds mention about a warrior queen Vishpala, trained in the art of warfare. She lost a leg in battle; an iron leg revived her spirit and she resumed her battlefield exploits. The status of women saw a gradual decline with Islamic invasion and later the British. But their valor remained in tact.

History books have profusely glorified Akbar, terming him as ‘The Great’. How can a ruler who ordered the massacre of around 40,000 Hindu unarmed innocent men, women, and children in Chittor Fort be termed great? How can a ruler who had a harem of hundreds of women be termed great? Historians have hardly questioned his objectionable behaviour. Italian writer and traveller Niccolao Manucci wrote in his book History of the Mogul Dynasty in India: From its Foundation by Tamerlane, in the Year 1399, to the Accession of Aurengzebe, in the Year 1657 about Akbar, “A policy which he employed to fix the Indians in his interests, was, to receive into the number of his wives their daughters, and to contract in marriage with the Rajas princesses of the Mogul blood. By means of these Maliometan women, he embroiled the Rajas in perpetual jars among one another.” The book was presented again by French historian, translator François Catrou.

The concept of Meena Bazaar, also called Kuhs Ruz (Day of Joy) was started by Humayun. This festival was meant only for women and closed for the public. ‘Women’ here are limited only to daughters and wives of noblemen, commanders or ministers of the Mughal Court, women of the Mughal ruler’s harem and Rajput ladies. Shops can be set up by any of these women where cloth, handicrafts, jewellery, home furnishing items, etc. were sold at high prices.  The Bazaar or Fair was held for a period of 5-9 days at different locations. The only male members allowed were the Mughal emperor and Mughal princes. The Norouz Fair (New Year Festival) was held in Meena Bazaar.

Though it is said the fairs were held for collecting earnings for charity, various records tell a different story. Niccolao Manucci, who visited and stayed in India during the Mughal era, wrote how Meena Bazaar served as the platform to recruit women into the Mughal emperor’s harem. English traveller and writer Thomas Coryat who visited India in 1615 also wrote how Mughal ruler Shah Jahan visited Meena Bazaar to catch the sight of pretty ladies.

Kiran Devi was the daughter of Shakti Singh, who was the brother of Maharana Pratap. After the death of Maharaja Udai Singh II of Mewar, a fight ensued between his sons. After Maharana Pratap was declared the heir to the throne and the Raja of Mewar, Shakti Singh joined Akbar. At the Mughal court, he earned the title of Mir (Lord). That was how Akbar created enmity between Rajputs by favoring one against the other.  But when Shakti Singh learnt about Akbar’s plan of attacking Mewar, he was angered. At the Battle of Haldighati that followed, he joined his brother Maharana Pratap’s forces.

The beautiful  Kiran Devi Rathore was married to Prithviraj Rathore, the prince/Raja of Bikaner. Prithviraj’s father Raja Kalyanmal had already surrendered to Akbar’s policy of annexation in 1571. Bikaner thus became a vassal of the Mughal kingdom. Prithviraj Rathore served in the Mughal court of Akbar both as a warrior and as one of the ‘Nine Gems’. He also happened to be a distant cousin of Maharana Pratap. He stayed in Agra along with his queen Kiran Devi.

Meanwhile, the Norouz Fair was held in Meena Bazaar in the Agra Fort premise. As was the rule, no male members were allowed entry in the bazaar area. Akbar entered the Norouz Fair disguised as a Muslim woman. He started roaming around the stalls. A philanderer, he started eyeing on the beautiful women in the fair. Abu’l-Fazl, who was the grand vizier of Akbar’s court and who authored Akbarnama, also described in his writings about how Akbar praised the beauty of Rajput women at the Meena Bazaar fair. Akbar’s eyes fell on Kiran Devi Rathore. He was so enchanted by her beauty that he longed to be with her for a night. Enquiring about her, he came to know who she was, but he could not control his emotions of lust.

Kiran Devi Rathore hated the Mughals, but she had to be by her husband’s side. She did not like the Mughals attacking Rajput kingdoms or their interfering into the affairs of the Rajputs. The Battle of Haldighati was over by then when the Norouz Fair took place. Though the Battle of Haldighati was a stalemate with neither party winning, Akbar considered himself the winner and basked himself in the fake glory. But Kiran Devi was familiar with the valor of her uncle Rana Pratap and she even heard enemies, i.e. soldiers in the Mughal Army and Mughal court sing praises about the Rana’s valor.

Akbar followed Kiran Devi Rathore and blocked her way when he got an opportunity. The Bikaner queen was then alone. She tried to make her way out, but was further stopped by Akbar’s guards. And Akbar confronted her. He showered her with heaps of praises on her beauty and offered her to be his mistress for the night. Kiran Devi realized he was Akbar.

Kiran Devi Rathore immediately responded, asking if he knew who she was. She fearlessly introduced herself as the wife of Prithviraj Rathore, one of the Nine Gems of his court. Akbar smiled. Her introduction did not stop him from advancing further. He asked his guards to leave. As soon as the guards left, Akbar moved closer towards Kiran Devi. But the very next moment, Akbar froze with fear!

Like a lightning’s flash, Kiran Devi Rathore took out the dagger she was carrying on her waist and placed it on Akbar’s throat. The Mughal ruler tumbled down (According to another version, Kiran Devi managed to pull the carpet that Akbar was standing on in the bazaar and Akbar fell. As per this version, other women watched the incident). Kiran Devi immediately put her foot on his chest and continued aiming her dagger on his throat at the same time uttering the following words:

“I am the Rajkumari of Mewar. I will kill the enemy, or die, but never surrender. We are Mewaris who jump in the Jauhar pyre, rather than fall in disgrace or surrender.”

Akbar immediately pleaded, begging for his life. Kiran Devi let him go under a condition that Norouz Fair, which demeaned women, should never be held again ever. A speechless Akbar agreed. Kiran Devi let off her grip. Akbar then walked away in silence.

Kiran Lioness pounced
Pulling a dagger on him
Begging for life
Akbar stretched out his hands.

Kiran Devi later narrated the incident to her husband Prithviraj, who felt ashamed. He decided to take help of his Rajput brethren and take revenge. Kiran Devi stopped him. Akbar never dared to approach her and never raised this issue.

2. History of the Mogul Dynasty in India: From its Foundation by Tamerlane, in the Year 1399, to the Accession of Aurengzebe, in the Year 1657 about Akbar, Niccolao Manucci.

Karan Thapar, You Are Wrong about Akbar; Here is How