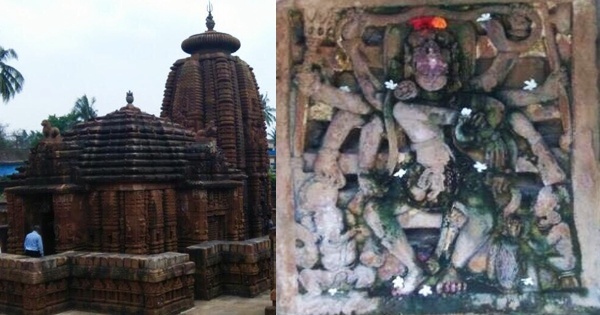 “There is a mystery hidden at Mukteshwar temple, Bhubaneswar. The Royal Medallion” of Chandravanshi Kingdom and its motifs…”

Almost cheek by jowl with a very busy road in Bhubaneswar is the Mukteshwar Temple dedicated to Lord Shiva. Eulogised as the “Gem of Odishan Architecture” this 10th century structure is one of the most newfangled ancient temples of Odisha. The temple architecture is petit yet clearly depicts a new style marking the end of an early phase and heralding a new architectural pattern in ancient Odisha. The striking feature of this temple is its superabundantly embellished “Mangaltorana” or arched gateway. This structure also stands with a low compound wall, a unique feature in Odishan temple art.

Mukteshwar temple consists of rekha deula (Vimana over the sanctum) and pidha deula (Pyramidal structure) on the jagamohana (Mahamandapa or the hall) facing west. The ceiling of the jagamohana is delicately carved in the form of a full blown lotus and contains the representation of Virabhadra and the Saptamatrikas with babies on their laps. The exterior of the temple is lavishly ornamented with graceful Nayikas, Naga Nagi pilasters, Bhara-raksakas, elegant arabesque motifs, Ganga, Yamuna, Nataraja, the mythical lion, etc.

One of the characteristic carving on the Vimana is the “Bho motif” consisting of a large medallion flanked by two dwarfish figures (Ganas) with snakes. The ornate chandrashala or ogee is coming out of the mouth of Kirtimukha (the mythical lion mask) at the apex. Within the chandrashala is a bell flanked by chains and below the bell is a circular lotus surrounded by flying celestials. Inside the lotus is another small chandrashala from which is a “head” peeping out (same “head” seen in the Mangaltorana and other places).

Below is a scene with court ladies and a very revered lady/man or someone extremely important to be part of the Royal medallion, flanked by two hunting scenes of deer and elephants by hunters with bow. This “Bho motif” is the “mystery” of this temple. Some experts say this motif or medallion is to invoke Lord Shiva as protector of the Royal household. Above the “Bho” is a figure of dancing Shiva or Ardhanarishwar (Half Shiva and half Parvati) surrounded by many miniature carved shrines. Exquisitely carved vertical piers and/or columns on either side adds to the lavishness. Below the piers are mythical humans. The figures below the piers are a matter of discussion. Who are they?

“A deep dive in the past; some call it Myth”. Let’s go back to the history of this temple. Mukteshwara Shiva temple was believed to be built by Somavanshi Kingdom of Kalinga around 600-900 AD. Possibly by King Yayati I or Janmejaya 1. Somavanshi kingdom had a lineage from Chandravanshi dynasty. So who are the Chandravanshis? 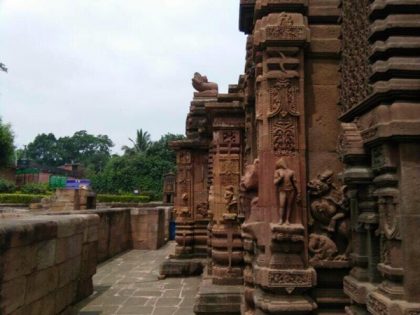 The Chandravanshi lineage is said to have begun with Budh (Mercury), the son of Moon. Chandradev (Moon) recreated Budh (Mercury) from the womb of Tara, the wife of Devguru Brihaspati (Jupiter). Budh married Vaivasvata, Manu’s daughter Ila (who according to Puranas was capable to metamorphosize herself to both male and female due to a boon by Lord Shiva). She was called Ila in female form and Sudyumn in male form. Ila gave birth to Pururva who married a court dancer (Apsara) named Urvashi.

In Pururva’s succession was born many brilliant kings like Jahnu Muni (who drank river Ganga after getting furious on her misdemeanor and later Ganga became famous as his daughter Janhavi). Kushik (in whose house Devraj Indra was born as his son), Gaadhi, Vishwamitra, etc. King Gaadhi’s daughter Satyawati was married to Richeek Muni. His son was Maharishi Jamdagni and grandson Parashuram. In later succession of Pururva’s son Ayu, were born kings like Nahush (who replaced the seat of Indra after terminating Vitrasur), Yayati, Puru, Yadu, etc. In the succession of King Yadu was incarnated Lord Shri Krishna who was thus called Chandravanshi. 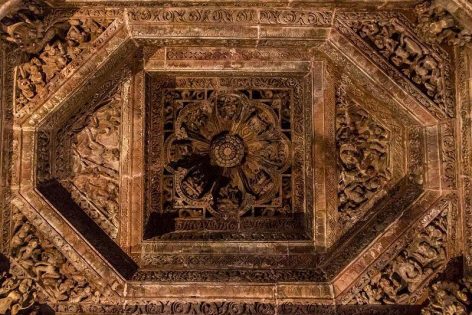 The Mukteshwar temple was believed to be built by a later Chandravanshi King either Yayati I or Janmejaya 1 in 600-900 AD from Kalinga. The Royal Medallion of all kingdoms passes through generations, contents guarded secretly and has protective powers when invoked.

The “Bho motif” must have remained the most secret emblem of the Royal Chandravanshi lineage and definitely had protective powers. If one looks closely at the image of the revered lady/man at the base of the Bho motif it could be of Ila who was both man and woman (one of the most intriguing epic references of the past). The image certainly has feminine features at least on one side of the body.

There are images of sages in the motifs at the base of the Vimana. This could be of Maharishi Jamdagni conversing with Ushanas or Shukrachariya on Aushunasa Dhanurveda (exercises of warfare) which is now lost in oblivion! Or his discourse of Vedas. In addition, there are various images of kings who could be great Chandravanshi kings like Yayati, Puru, Yadu, etc. The famous peeping man in the Bho motif could be the first king Pururva or even planet Mercury (Budh) overlooking all Royal activities of the lineage/kingdom. 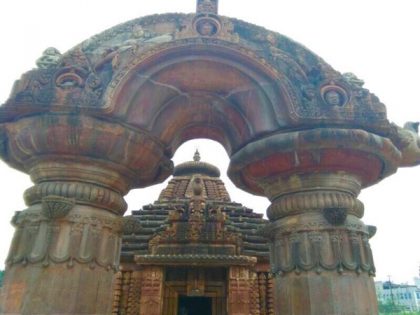 The Chandravanshi lineage commences from Budha (mercury) who has a lion with elephant tusk as his mount or Vahana. This mythical lion is depicted in the temple carving apart from lion over elephant images almost everywhere not to forget of numerous figures of Apsaras which may even include Urvashi!! The Ardhanarisvara Shiva carving at the top may have reference to androgynous form of Ila (who was androgynous as Ila and Sudyumn). The numerous Naga and Nagi sculptures may be depicting the great Chandravanshi Kuru king Janmajeya’s story!!

Certainly Mukteshwar temple needs a closer study to establish what each carving depicts. The Bho motif certainly has its own detailed account which is lost today, along with its celestial Chandravanshi powers concealed forever! Can this powerful medallion be invoked someday? 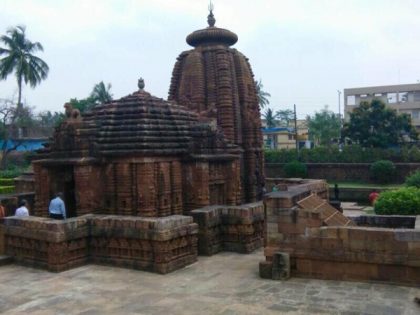 A must visit and a closer look at Mukteshwar temple highly recommended.