Here is Bhuvan Lall’s version of a man of extraordinary will, who had embarked on death defying journeys for India’s freedom across the treacherous mountains of Afghanistan, threatening waves of Atlantic and Indian Oceans, tortuous jungles of Burma – pursued by assassins and the spectre of death. Faced with impossible odds, he was determined to triumph over an undefined future with courage, dignity and honor. He became the stuff of legends in his own lifetime. He was ‘The Man India Missed the Most’. He was Netaji Subhash Chandra Bose.

Relive the life lived by Netaji Subhash Chandra Bose, reading word by word, paragraph after paragraph, page after page, until you reach the ‘finish’ part of The Man India Missed the Most, a novel (BOOK) by Bhuvan Lall.

The truth about Netaji Bose and the sacrifices he made for India have been wiped out from History. Bhuvan Lall’s The Man India Missed the Most taps into the single greatest emotional truth of India’s freedom movement – the Indian National Army trial at the Red Fort that affected the withdrawal of the monumental British Raj from India. It was Netaji who facilitated India’s freedom. His impact led the British panic and leave India.

To quote Bhuvan Lall, “Firmly holding the tricolor, the Indian National Army advanced with the war cry ‘Delhi Chalo’ (Onwards to Delhi). Their military objective was India’s independence. And their leader was Subhash Chandra Bose. With shells blasting, guns blazing and blood flowing, this was the defining moment of his life. He was the solitary Indian nationalist to confront the mighty British Empire on the battlefield.”

Bhuvan Lall’s The Man India Missed the Most was launched on THE 120th Birth Anniversary of Netaji on January 23rd this year amid the presence of Maj Gen (Dr.) Gagandeep Bakshi, Subhash Ghai, Film Director and other eminent personalities. Here is an excerpt of an interview with Bhuvan Lall on his book on Netaji, taken by Manoshi Sinha, Editor of My India My Glory Blogazine.

Please tell us a few lines about your book The Man India Missed the Most?

My book The Man India Missed the Most chronicles the impact of the iconic leader Subhash Chandra Bose on India’s freedom movement in a never-before style. It is a tale of heroism and nationalism, of adventure and sacrifice and of victories and catastrophic defeat. His story illustrates how life can often transcend works of literature in terms of idealistic spirit, dramatic episodes and tragedy.

The Man India Missed the Most is also an account of the ferocious will of a nationalist who refused to give up during the war for India’s Independence. The hard power approach he favored for gaining India’s freedom from colonialism often paralleled and sometimes overshadowed the non-violent civil disobedience movement. In effect, Bose’s contribution has not been adequately celebrated in Independent India.

What was your objective behind writing a book on Netaji?

The heroism and patriotism of Netaji Subhash Chandra Bose should be shared and remembered. This was my objective behind writing a book on Netaji. The Man India Missed the Most is also a heartfelt tribute to the sacrifices, struggles, daring and compassion of all the men and women who fought for India’s freedom.

The Man India Missed the Most is aimed for all age groups, more especially for the younger generation of India growing 7 decades after independence.

What about reaching a wide audience across India and the world so that they uncover the truth about Netaji Bose?

Cinema is the best medium to reach the widest audience irrespective of regions. Making of a Hollywood movie and a TV series based on my book is in the agenda.

How many years did it take to research on Netaji?

I have spent almost 20 years researching and documenting the life and times of the foremost Indian nationalist Netaji Subhash Chandra Bose.

Any detailed documentation on Netaji on how he gave shape to his Indian National Army outside India?

The Man India Missed the Most spans three continents, taking the reader across the expanse of European imperialism in India from the moment Vasco da Gama sighted the Indian coast in the summer of 1498 to the liberation of Goa in December 1961.

My book also focuses on the global footprint of India’s freedom movement ranging from the West Coast of North America in San Francisco and Vancouver to the capital cities of European superpowers in London and Berlin and finally to the Asian nations of Japan, Singapore and Burma.

Bhuvan Lall is an award winning filmmaker, international journalist and creative entrepreneur. He is the Executive Chairman of LALL Entertainment Private Limited that deals in animation, broadcasting, and cinema. 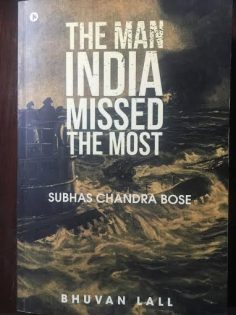 Buy this book from Flipkart.