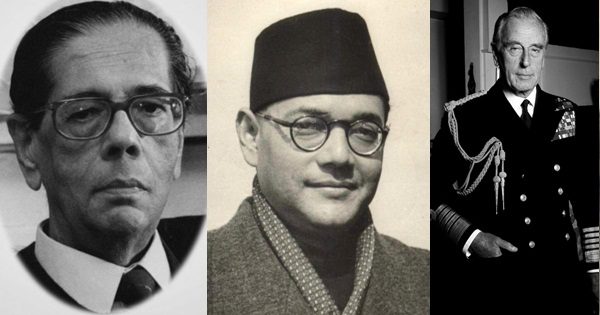 For 73 years and continuing, we, the citizens of India, for four generations now, have been kept in the dark. We have been kept away from truth – truth about our history, about our past, which we have a right to know. From 8th to 18th century there has been continuous resistance by the native warriors of the soil against Islamic invaders. This was followed by resistance by millions of freedom fighters for two centuries against British Christian invaders.

In 1940, at the age of 43, Netaji Bose escaped from India. Why? To seek help from Indians settled and working overseas to drive the British out of India. He undertook the leadership of the Indian National Army (INA) of 60000 plus soldiers and further expanded it. He established the Provisional Government of Free India, i.e. Azad Hind Govt. in Singapore on 21 October 1943. It was recognized by 11 countries including Russia. A series of INA battles were fought against the British, especially in Burma and the Northeast; Netaji’s army emerged victorious.

Yet, have we done enough to remember this titanic personality? Have we been true to the history and the facts? Recently, myindiamyglory.com organized a Facebook LIVE session on the topic ‘Honor Indian Lion Netaji Subhash Bose by Installing His Statue at Vacant George V canopy near India Gate’. Among the speakers in this session were Maj Gen GD Bakshi, Prof Kapil Kumar, Chandra Kumar Bose, Col RSN Singh, and Pushpendra Kulsheshtra. The session was moderated by Manoshi Sinha, Editor of myindiamyglory.com.

In this session, Chandra Kumar Bose (politician, rights activist, grandnephew of Netaji Subhash Chandra Bose) revealed a historical fact which we are hardly aware of. His father Amiya Bose (Amiya Nath Bose) met Lord Mountbatten, the Last Viceroy of India, in 1976. In answer to Amiya Bose’s question on what made British leave India, Mountbatten’s answer was ‘INA Battles and INA Trials’.

To exactly quote Chandra Kumar Bose, “…it was the Indian National Army and the subsequent INA Trials which were held at the Red Fort in 1946 completely destroyed the loyalty and allegiance of the British forces to the British High Command. This is all known, but to reiterate what Gen Achinleck wrote to the Viceroy, what Clement Attlee who signed the ‘transfer of power’ documents as the British prime minister in 1947, there is another story, another factual story that is not yet told.”

“It was a 1976 summer that my father Amiya Bose and my elder brother Surya Bose met Lord Mountbatten in England. My father asked him a very straight question – ‘WHAT MADE YOU LEAVE INDIA?’ The question that Phani Bhushan Chakraborthy had also asked Clement Attlee; my father also posed the same question to the last Viceroy of India, Lord Mountbatten in 1976. Lord Mountbatten spoke very softly. And the reply was very clear and specific. ‘THE BATTLE OF THE AZAD HIND FAUZ . He said of course Indian National Army. THE BATTLE OF THE INDIAN NATIONAL ARMY AND THE INA TRIALS WHICH WAS THE MAIN REASON WHY WE HAD TO RELINQUISH INDIA’. So, this is the third person who reiterated the same story.”

Here is a YouTube link of the LIVE session:

According to the Bose family archives, as described by Chandra Kumar Bose, here is a brief about Amiya Nath Bose. He was the second son of Sarat Chandra Bose and Bivabati. He grew up under the close care and inspiration of his father Sarat and uncle Subhas, the famed Bose Brothers. He entered student politics as an undergraduate at Scottish Church College in Calcutta, and founded the Calcutta University Students Union and became its first President. During his years in England (1937-44) as a student at Cambridge University, and also qualifying as a Barrister, he was actively involved in campaigning for Indian independence, particularly during the 1942 Quit India Movement. After his return to India at the end of the Second World War, he worked closely with his father Sarat Bose to strengthen and unite the progressive leftist forces in the country, and to prevent the partition of India and then of Bengal. Throughout his life, as a politician and a Member of Parliament, Amiya Bose sought to promote the Bose Brothers’ vision of a secular, just and prosperous India. In the late 1970s as the Indian Ambassador to Burma, from where Netaji Subhas Chandra Bose had launched his final battle for Independence, Amiya Bose endeavoured to promote the Bose Brothers’ vision of Asian unity and cooperation. Earlier Amiya Bose had personally researched and collected a wealth of valuable documents, photos and films on Netaji and his activities from the archives in England, Germany, Italy and Japan as well as in India. Amiya Bose entrusted his collections to the museum and archives at Netaji Bhawan in Calcutta established by Sarat Chandra Bose in 1946, to be readily available to scholars, researchers and students across the Country.

Maj Gen GD Bakshi gives a detailed account of the conversation between Attlee and Chakraborthy in his book BOSE: AN INDIAN SAMURAI (A Military Assessment of Netaji and the INA). Atlee had told Chakraborthy that the British left India primarily because of Netaji’s INA and the mutinies it triggered. Clement Richard Attlee was the British Prime Minister from 1945 and 1951. It was he who signed off on the decision to grant Independence to India. And hence, India gained freedom on 15th August 1947. Clement Attlee visited India (Kolkata) in 1956. He stayed at the residence (Governor’s palace) of the then Governor of West Bengal and Chief Justice of the Calcutta High Court – Justice PB Chakraborthy.

Justice PB Chakraborthy wrote a letter to the publisher of RC Majumdar’s book, A History of Bengal. In this letter, the Chief Justice wrote, “When I was acting Governor, Lord Attlee, who had given us independence by withdrawing British rule from India, spent two days in the Governor’s palace at Calcutta during his tour of India. At that time I had a prolonged discussion with him regarding the real factors that had led the British to quit India. My direct question to Attlee was that since Gandhi’s Quit India movement had tapered off quite some time ago and in 1947 no such new compelling situation had arisen that would necessitate a hasty British departure, why did they had to leave? In his reply Attlee cited several reasons, the principal among them being the erosion of loyalty to the British crown among the Indian army and Navy personnel as a result of the military activities of Netaji. Toward the end of our discussion I asked Attlee what was the extent of Gandhi’s influence upon the British decision to quit India. Hearing this question, Attlee’s lips became twisted in a sarcastic smile as he slowly chewed out the word, m-i-n-i-m-a-l!”

In the words of Maj Gen GD Bakshi, “A great deal of British archival material is now available that clearly proves that the British left primarily because of the outrage in India caused by the INA trials and the British fear that widespread revolts would start in the Indian armed forces. The most primary source was Lord Clement Attlee, the British PM who signed the independence of India Act in 1947. In 1956, he clearly said to Justice PB Chaktrabarthy that the British had left solely because of the INA of Netaji Bose and the role of Mahatma Gandhi in their decision to leave was minimal.” More evidences are featured by Maj Gen GD Bakshi in his second book on Netaji titled BOSE OR GANDHI: Who Got India Her Freedom.

All the panelists in the LIVE session revealed many unknown facets of Netaji Subhash Chandra Bose and the Azad Hind Fauz. Here is the YouTube video of the complete session:

‘Netaji Subhash Bose: The Liberator of Indian Subcontinent’, another book on Netaji Bose by Dr Kalyan De, published by Garuda Prakashan, is based on authentic documents from the British archives, declassified in 1971. To quote Brig. R. S Chhikara from the Foreword of the book, “These documents are in the form of carefully selected letters, reports and minutes exchanged between the main protagonists of the British Raj in India – the Viceroy Field Marshal Viscount Wavell, the Commander-in- Chief of the British Indian Army General Sir Claude Achinleck and other functionaries, such as the Governors of various states and the Intelligence Department on the one hand and Secretary of State for India, Lord Pethick Lawrence and other functionaries of the British administration in London on the other, leading to their ultimate decision to leave India as early as possible.”

The distorted and one-sided historical narrative about the Indian freedom struggle fed to us since decades need to be done away with. Let truth prevail. Let Netaji Bose be given the rightful place he deserves. Jai Hind!