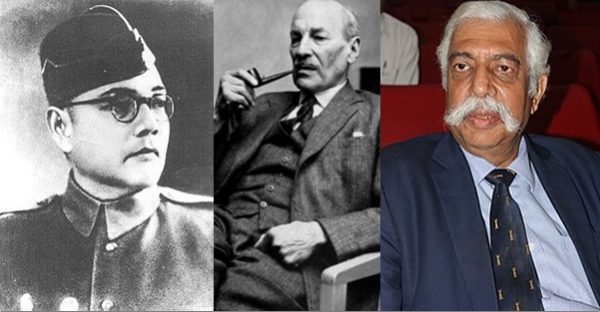 In 1940, at the age of 43, Netaji Bose escaped from India. Why? To seek help from Indians settled and working overseas to drive the British out of India. To arrange an army with the help of Japan and other countries to attack the British forces in the Indian soil and free India. He was confident about it. And he succeeded!

In just three years, i.e. in 1943 (October 21), Netaji Bose announced the establishment of the Provisional Government of Free India or Azad Hind. Its army was the Azad Hind Fauj (Indian National Army). Location, Singapore! He allied with the Axis powers and his cause was funded by Imperial Japan monetarily, militarily and politically. Netaji was supported in this move by Nazi Germany, Empire of Japan, the Italian Social Republic, and their allies. Many Indians donated for the cause.

Initially, in India, Netaji Bose was the leader of the youth wing of the Indian National Congress in his late 20s. He became its President in 1938 and 1939. But his ideologies did not match with Mahatma Gandhi who advocated non violence as well as that of the Congress high command. Bose believed that it was only by using arms that the British could be driven out of India. Ultimately, he was ousted from Congress leadership in 1939 due to this ideological difference.

Lord Linlithgow was the British Viceroy of India when the Second World War broke out on September 3, 1939. On the same day, Lord Linlithgow declared India as belligerent and at war. The Congress supported the British on this decision on a condition that India should be declared as a free country immediately after the war. Later the Congress passed a resolution that the issue of India’s participation in war or peace should be decided by the Indian citizens. The British did not pay heed to this resolution. The Muslim League supported the British fully on their war decisions.

Meanwhile, Netaji Bose advocated a mass civil disobedience campaign, to protest against the Viceroy’s decision of declaring war on India’s behalf. His strategy wasn’t supported by Mahatma Gandhi and the Congress high command. Thereafter, Netaji Bose organised mass protests in Calcutta calling for the ‘Holwell Monument’ stationed at Dalhousie Square to be removed. ‘Holwell Monument was also called the Black Hole, a small dungeon (prison) where British prisoners of war comprising of Anglo-Indian soldiers and Indian civilians were imprisoned on the night of 20 June 1756. So cramped was the condition of the dungeon that 123 of 146 prisoners died from suffocation and heat exhaustion. Following the mass protests, Netaji Bose was arrested and sent to jail. Later, he was placed under house arrest by the British. He managed to escape to Germany, via Afghanistan and the Soviet Union in 1940.

“Netaji Bose was a man of extraordinary will, who had embarked on death defying journeys for India’s freedom across the treacherous mountains of Afghanistan, threatening waves of Atlantic and Indian Oceans, tortuous jungles of Burma – pursued by assassins and the spectre of death. Faced with impossible odds, he was determined to triumph over an undefined future with courage, dignity and honor. Netaji Bose’s global footprint of India’s freedom movement ranged from the West Coast of North America in San Francisco and Vancouver to the capital cities of European superpowers in London and Berlin and finally to the Asian nations of Japan, Singapore and Burma.” – a quote by Bhuvan Lall, author of The Man India Missed the Most, a book on Netaji.

With Japan’s support, the Provisional Government of Free India had nominal authority of the Andaman and Nicobar Islands including parts of Manipur and Nagaland. And Azad Hind declared war against the Anglo-American allied forces on the Indo-Burma Front. They charged against the British forces in the Imphal-Kohima sector. After defeating the British defences in Kohima, they advanced further towards Moirang. From here they had to retreat owing to compromised supply lines, withdrawal of Japanese forces, followed by defeat.

In between November 1945 and May 1946, the British held 10 court-martial trials of soldiers of the INA at Red Fort. Hence, it is also known as the Red Fort trials. A number of officers of the Azad Hind Fauz were considered guilty. Most of the soldiers who were tried were British prisoners of War who joined Netaji’s INA. The joint court-martial of Colonel Prem Sahgal, Colonel Gurbaksh Singh Dhillon, and Major General Shah Nawaz Khan, who were officers in the British Indian Army and taken as prisoners of war, and who joined the INA, drew sympathy from Indian soldiers posted in the British Army. The British charged them for ‘waging war against the King-Emperor’. There was huge outcry and unrest amid the Indian troops. The outrage led the British reduce the charges against the guilty. The events of 1946, especially the revolts in the Royal Indian Navy and the British Indian Army, have been described in great detail in Maj Gen GD Bakshi’s book, BOSE: AN INDIAN SAMURAI (A Military Assessment of Netaji and the INA). 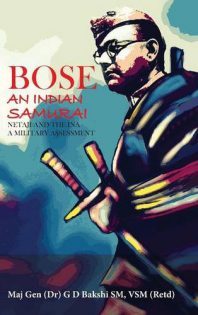 Netaji Bose’s courage of creating an army and his attack did create terror amongst the British in India. Besides, the INA trials played an effective role in instilling the spirit of patriotism amongst the Indian soldiers in the British Army. They rose in revolt. Uprisings against the British across the length of India from time to time had demoralized the spirit of the British. Who isn’t familiar with the sacrifices of Bhagat Singh, Rajguru, Sukhdev, and many freedom fighters from across the country? All of these factors led the British leave India. So why credit India’s freedom entirely to the soft power of ahimsa (non-violence)?

In the words of Maj Gen GD Bakshi, “A succession of court historians have tried to craft a narrative that India had obtained her freedom entirely by the soft power of ahimsa (non-violence) and Satyagraha; and that hard power had no role to play whatsoever. This is a huge sacrilege. As per the INA’s official history, the force had a total strength of 60,000. Of these, 26,000 were killed in action. Was that non-violence? The pity is that the Nehruvian dispensation treated these men as traitors. There is no memorial for the 26,000 martyrs. The INA veterans were not taken back into the Army (on Mountbatten’s advice) and denied their war time pensions. Any nation that seeks to gloss over the martyrdom of 26,000 of its soldiers erodes the very basis of its nationhood.”

“The problem arose from the Nehruvian dispensation’s quest for political legitimacy. It claimed that its non-violent struggle alone had liberated India from the colonial yoke and as such, that gave it the right to rule. This was a deliberate distortion of History to downplay the role of violence and completely bury the role of Bose and the INA. In denying this obvious legacy of force and violence, the Nehruvian dispensation went to inordinate lengths to underline the relevance of its ideology of pacifism and non-violence.”

Clement Richard Attlee was the British Prime Minister from 1945 and 1951. It was he who signed off on the decision to grant Independence to India. And hence, India gained freedom on 15th August 1947. Clement Attlee visited India (Kolkata) in 1956. He stayed at the residence (Governor’s palace) of the then Governor of West Bengal and Chief Justice of the Calcutta High Court – Justice PB Chakraborthy. Maj Gen GD Bakshi gives a detailed account of the conversation between Attlee and Chakraborthy in his book BOSE: AN INDIAN SAMURAI (A Military Assessment of Netaji and the INA). Atlee had told Chakraborthy that the British left India primarily because of Netaji’s INA and the mutinies it triggered.

Justice PB Chakraborthy wrote a letter to the publisher of RC Majumdar’s book, A History of Bengal. In this letter, the Chief Justice wrote, “When I was acting Governor, Lord Attlee, who had given us independence by withdrawing British rule from India, spent two days in the Governor’s palace at Calcutta during his tour of India. At that time I had a prolonged discussion with him regarding the real factors that had led the British to quit India. My direct question to Attlee was that since Gandhi’s Quit India movement had tapered off quite some time ago and in 1947 no such new compelling situation had arisen that would necessitate a hasty British departure, why did they had to leave? In his reply Attlee cited several reasons, the principal among them being the erosion of loyalty to the British crown among the Indian army and Navy personnel as a result of the military activities of Netaji. Toward the end of our discussion I asked Attlee what was the extent of Gandhi’s influence upon the British decision to quit India. Hearing this question, Attlee’s lips became twisted in a sarcastic smile as he slowly chewed out the word, m-i-n-i-m-a-l!”

In the words of GD Bakshi, “A great deal of British archival material is now available that clearly proves that the British left primarily because of the outrage in India caused by the INA trials and the British fear that widespread revolts would start in the Indian armed forces. The most primary source was Lord Clement Attlee, the British PM who signed the independence of India Act in 1947. In 1956, he clearly said to Justice PB Chaktrabarthy that the British had left solely because of the INA of Netaji Bose and the role of Mahatma Gandhi in their decision to leave was minimal.”

It is time we revive the ardent nationalism of Netaji Bose and acknowledge his role in India’s independence from British rule. Jai Hind!

1. BOSE: AN INDIAN SAMURAI (A Military Assessment of Netaji and the INA), GD Bakshi