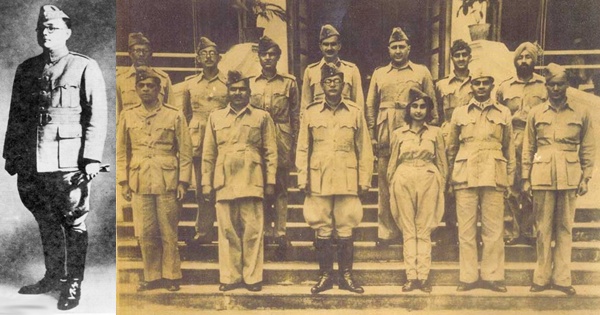 Do you know on 21 October 1943, Netaji Bose announced the establishment of the Provisional Government of Free India or Azad Hind? Its army was the Azad Hind Fauj. Location, Singapore! He allied with the Axis powers and his cause was funded by Imperial Japan monetarily, militarily and politically. Netaji was supported in this move by Nazi Germany, Empire of Japan, the Italian Social Republic, and their allies. Many Indians donated for the cause.

According to Bhuvan Lall, author of The Man India Missed the Most, a book on Netaji, INA trials in Red Fort led the British panic and leave India. To quote him, “Firmly holding the tricolor, the Indian National Army advanced with the war cry Delhi Chalo (Onwards to Delhi). Their military objective was India’s independence. And their leader was Netaji Bose. With shells blasting, guns blazing and blood flowing, this was the defining moment of his life. He was the solitary Indian nationalist to confront the mighty British Empire on the battlefield.”

“Netaji Bose was a man of extraordinary will, who had embarked on death defying journeys for India’s freedom across the treacherous mountains of Afghanistan, threatening waves of Atlantic and Indian Oceans, tortuous jungles of Burma – pursued by assassins and the spectre of death. Faced with impossible odds, he was determined to triumph over an undefined future with courage, dignity and honor.”

“Netaji Bose’s global footprint of India’s freedom movement ranged from the West Coast of North America in San Francisco and Vancouver to the capital cities of European superpowers in London and Berlin and finally to the Asian nations of Japan, Singapore and Burma.”

With Japan’s support, the Provisional Government of Free India had nominal authority of the Andaman and Nicobar Islands including parts of Manipur and Nagaland. And Azad Hind declared war against the Anglo-American allied forces on the Indo-Burma Front. They charged against the British forces in the Imphal-Kohima sector. After defeating the British defences in Kohima, they advanced further towards Moirang. From here they had to retreat owing to compromised supply lines, withdrawal of Japanese forces, followed by defeat.

In the words of Maj Gen GD Bakshi, “Netaji Bose is an icon of nationalism. Today we need to revive his intense spirit of patriotism. We also need to introduce his motivational methodology into our Armed forces.”

“A succession of court historians has tried to craft a narrative that India had obtained her freedom entirely by the soft power of ahimsa (non-violence) and Satyagraha; and that hard power had no role to play whatsoever. This is a huge sacrilege. As per the INA’s official history, the force had a total strength of 60,000. Of these, 26,000 were killed in action. Was that non-violence?”

“The pity is that the Nehruvian dispensation treated these men as traitors. There is no memorial for the 26,000 martyrs. The INA veterans were not taken back into the Army (on Mountbatten’s advice) and denied their war time pensions. Any nation that seeks to gloss over the martyrdom of 26,000 of its soldiers erodes the very basis of its nationhood.”

“The problem arose from the Nehruvian dispensation’s quest for political legitimacy. It claimed that its non-violent struggle alone had liberated India from the colonial yoke and as such, that gave it the right to rule. This was a deliberate distortion of History to downplay the role of violence and completely bury the role of Bose and the INA. In denying this obvious legacy of force and violence, the Nehruvian dispensation went to inordinate lengths to underline the relevance of its ideology of pacifism and non-violence.”

Today, we need to revive the ardent nationalism of Netaji Bose – an Indian Samurai par excellence.

1. BOSE: AN INDIAN SAMURAI (A Military Assessment of Netaji and the INA) by Maj Gen GD Bakshi

2. The Man India Missed the Most, by Bhuvan Lall.