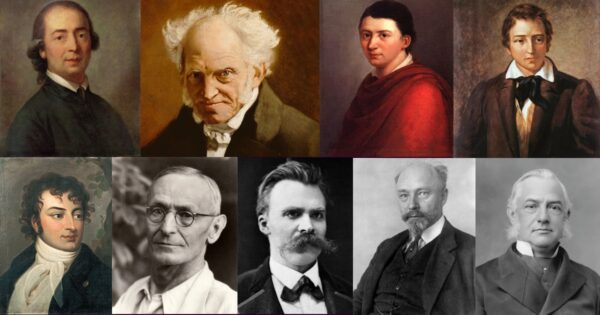 Germans became interested in India rather late, but when they finally came in touch with ancient Indian manuscripts and their translations, they, especially German philosophers, became VERY interested.

Heinrich Heine, (1797 – 1856), a German author, wrote after listening to lectures on the Upanishads, “The Portuguese, Dutch and British have for a long time ferried huge treasures on big ships from India to their home countries. We Germans had to look on. But we will not be left behind. We take their knowledge. Our Sanskrit scholars provide us with this wealth from India right here in Bonn or Munich.”

Many German intellectuals became great admirers of India. Those early Germans never went to India. They knew India only from those ancient texts. They knew the profound philosophy of the Upanishads, the Bhagavad Gita, the Ramayana or ‘Shakuntala’ by Kalidasa. India became for them the land of their dreams, where beautiful people and rich nature were still in harmony, and where the soul, which had gone dry in Europe, found plenty of nourishment.

German philosopher Arthur Schopenhauer (1788 – 1860) called Indians “the most noble and most ancient people”, and the Upanishads “the greatest gift of this century”. He said, “Reading the Upanishads is comforting in my life and will be comforting when I die.”

He also wrote: “Our religion (Christianity) will never ever take roots in India… On the contrary, Indian wisdom will stream to Europe and will fundamentally change our knowledge and thinking.”

Max Mueller did great harm to India as a young, well-paid employee of the British East India Company. His job was to translate the Vedas, and he was eager to show that the Vedas are worthless and Christianity much superior. Moreover, he proposed without any archaeological evidence the Aryan Invasion Theory, which helped the British to divide and rule.

The older Max Mueller, however, seemed to have realised the depth of the ancient Indian tradition and praised India highly. He said the famous sentences in his lecture in Cambridge:

“If I were asked under what sky the human mind has most fully developed some of its choicest gifts, has most deeply pondered on the greatest problems of life, and has found solutions, I should point to India.”

“If I were asked from which literature, we here in Europe would get the refinement, which we need most to make our life more universal, inclusive and perfect,… I would again point to India.”

Many more German philosophers would deserve to be mentioned:

For example the historian and philosopher Gottfried Herder (1744 – 1803), who took the side of the Hindus in a fictional dialogue with a missionary, in spite (or maybe because) he had also studied theology. In his lectures on philosophy, he saw in India the Cradle of Humanity in a Golden Age.

Or the Schlegel brothers (born in 1767 and 1772), of whom the elder one established the first printing press in Devanagari in Bonn with the help of the Prussian King.

Amongst the German philosophers, Friedrich Nietzsche (1844 – 1900) was famous for claiming that “God is dead”. Yet even Friedrich Nietzsche praised India’s ‘religion’. He wrote, “in regard to religion, Europe has not reached the subtleness of thought of the ancient Brahmins”.

Graf von Keyserling was one of the first who travelled to India after the Suez Canal had opened. He wrote a book on yoga, which was a big hit in the 1920s after WW1. He wrote: “It is incredible, how important even short, but regular meditation is for inner growth.”

However, one German philosopher, Hegel (1770 – 1831), considered Indian philosophy without any merit. Not only this. He also claimed that the character of Indians is “cunning and deceitful and that moral and human dignity are missing”. He was especially harsh with the Brahmins: “The British say that they only eat and sleep”, he wrote.

He never was in India, but believed the British … and yet he is praised as one of the greatest philosophers. Shouldn’t his gullible attitude, to trust the British oppressors’ opinion, disqualify him from being regarded as a great intellectual?

Immanuel Kant (1724 – 1804), another famous German philosopher, did not demean India, but hardly mentioned Indian philosophy in his lectures.

Are these two the preferred German philosophers, who are taught today, also to Indian students, because they helped in demeaning India?

Imagine the plight of the Church.

The intellectual elite of Germany praised the philosophy of ‘heathens’, whom the “only true” God, who according to the Church is the Christian God, won’t allow into heaven. To keep its flock under control, the Church needed to prevent Indian thought from spreading among the common people and more important, it had to be seen as primitive.

The Church was successful in vilifying Hindus and their tradition. Most people associate with India and Hinduism even today mainly “an oppressive caste system and many strange gods”. It was also what I had learnt in school about Hinduism.

It’s a great irony that many of the Indian texts were looted from India by missionaries.

Missionaries were in India already before the longing for India gripped the German philosophers. For example, Heinrich Roth (born 1620), a Jesuit, was the first German Sanskrit scholar. He died in Agra in 1668 as head of the Jesuit Residency. A few years earlier, he had visited Germany and Italy. Did he ‘donate’ Indian texts to the Vatican and German libraries, like the missionary Haeberl did to the Tuebingen University later in 1839? The Dean of Tuebingen University praised the “gift” from Haeberl of 11 volumes of ancient Indian texts, as a “great ornament for the university” but added “Of course our treasure is small compared to what is in the India House in London.”

This claim by the Dean was made four years AFTER Thomas Macauley, in 1835, introduced the English school system in India, telling Indian students that their tradition is worthless and half a shelf of English literature is more worth than all their literature…

It was an insidious ploy to appropriate and benefit from Indian knowledge and at the same time, cut Indians off from it and make them look down on it.

Fortunately, there is a certain revival now.

Many Indians are learning Sanskrit now and take interest in knowing more about the huge Indic knowledge system, where still millions of texts have not been studied.

Yet those who greatly benefitted from India, won’t like this and will try to obstruct it.

This may be one of the reasons, why Hindutva and Hindus are so much under attack nowadays by media worldwide.

This revival may also be a reason, why nowadays great care is taken NOT to mention “India” in any positive way. For example, while those German philosophers in earlier centuries acknowledged the valuable inspiration from India, modern Western philosophers don’t acknowledge it when they make use of Indian thought in “their own” philosophy, for example the concept of Maya.

In future, maybe even Elon Musk will be seen as having discovered the concept of Maya. He said recently (paraphrased), ‘this world is not the real thing. It’s more like a virtual reality.’

Out of fairness, shouldn’t they acknowledge the origin? After all it’s the West which started copyrights and patents and is suing people for plagiarism.

The above write-up was first published at the author’s personal blog mariawirthblog.wordpress.com.