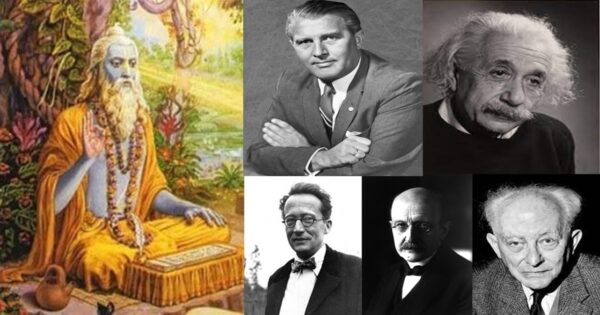 In the first part, I showed that German philosophers were VERY interested in ancient Indian manuscripts which were often looted by missionaries.

What about German scientists? Were they also interested in Indian knowledge?

Yes. Very much so.

Famous names are among them: Einstein, Max Born, Max Planck, Heisenberg, Schroedinger, Weizaecker and Wernher von Braun. These scientists of the early 20th century knew about Indian philosophy and did not hide their knowledge of Vedanta. Schroedinger ended his lectures often with the Upanishadic quote “Atma is Brahma”.

But these scientists did not disclose if they got concrete help from ancient manuscripts for ‘their discoveries’. Einstein praised India for the invention of Zero. But was this all, what he got from India? In all likelihood, he was not fully honest.

German scientists were very advanced in Nazi Germany. How?

Only while researching on this topic, I realised how advanced German scientists suddenly were and why the Americans were so keen to capture them at the end of the war, including hardcore Nazis. The Americans and British even tried to outmanoeuvre their French and Russian allies in getting those scientists in 1945. They were successful getting Heisenberg first, though he lived in an area where the Russians were approaching.

Yet Russians also captured documents. This was revealed almost casually by professor Dr K S Balasubramanian of the Kuppuswami Sastry Research Institute in Chennai. In an interview by Ashish Dhar (on the net under “Knowledge makes India incredible” minute 47 onwards).

Prof Balasubramanian recounts the following incident of what Dr Padma Subramanian, a famous dancer, had told him:

Dr Padma Subramanian had once a performance in Leningrad in Russia. She also visited the museum. The director showed her some 1000 ancient Indian manuscripts. He told her, that they were captured by the Russians at the end of WW2 from Germany. Among them was a manuscript on missiles, and Russia was able to develop its first InterContinental Ballistic Missile (ICBM) on the basis of this manuscript. Further, he said, among those manuscripts was also info on cloud piercing to manipulate the weather, which the Russians successfully did before Dr Padma Subramaniam’s open-air performance.

This is BIG news and strangely, hardly anyone knows about it. Those Indian manuscripts were still in Germany, when in the 1930s, Heisenberg and Weizaecker worked on nuclear weapons and Wernher von Braun worked on missiles for Nazi Germany. Incidentally, all three also visited India. Einstein, too, was in Germany till 1933. He would have known and warned President Roosevelt that the Germans will soon have the atomic bomb.

Remember: in 1903, the Wright brothers managed to fly only for 12 seconds up to only 38 meters high. How come the German air force had fighter jets in the 1930s and ballistic missiles which not only bombarded London but some of them also went into space over 80 km high?

Further, they built an atomic reactor and worked on an anti-gravity space craft, the famous Nazi Bell. This Nazi Bell resembled in an uncanny way the Rukma Vimana which Shvikar Bapu Talpade had built. It is rumoured, it was secretly taken from Bombay to Germany.

Unfortunately, many Indians ridicule the claim that ancient Indians had vimanas, while Germans took it seriously. Shivkar Bapu Talpade studied the Sanskrit texts and flew a remote-controlled machine in 1895 (eight years before the Wright brothers) for 37 seconds and 457 meter high. Like so many other Indian achievements, this is not in history books.

Shivkar Bapu Talpade had a sad life. He didn’t get funds and was put into prison for trying to develop a mercury ion engine according to ancient texts. After his release, he worked on the anti-gravity Rukma Vimana. He died at age 57, disillusioned.

Praveen Mohan has a YouTube video on him. Here is a screenshot from the Nazi Bell and Rukma Vimana: 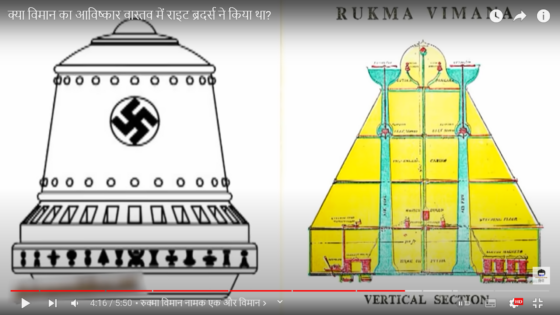 I hope, research is done and credit is given to whom it is due.

Wernher von Braun was among the 1000 German scientists, who, together with their documents and families, were taken to USA in the operation ‘paperclip’. He started the space program of NASA in the 1950s which not only uses mercury ion engines, but also values Sanskrit highly. Yet Talpade was ridiculed and imprisoned by the British. Did NASA independently discover the suitability of mercury or did both get guidance from ancient Indian texts? Would NASA admit?

It’s surely incredible that “Western science” was suddenly so advanced as to go into space. Incidentally, the Indian Puranas are full of space travels, but vested interests convinced Indians that these are just fairy tales.

In the Srimad Bhagavatam (book 3, discourse 23), Rishi Kardama, showed his wife Devahuti the whole world from an aerial palace which could fly at will and had all the comforts imaginable. Of course, any normal person would dismiss this as a fairy tale. But we forget that any normal person is brainwashed into believing that the present human is the most intelligent of all living beings and even only 10,000 years earlier, man was primitive.

This narrative is in all likelihood wrong, and there is a good chance that certain powerful people know that it is wrong and prevent any research, for example in archeology, which would prove it. Otherwise, it is inexplicable, why certain findings are hidden and archeologists outed.

Incidentally, in the late 1800s, spacious and comfortable ‘airships’, far larger than any Boeing today, were built and actually flew across the Atlantic to New York in around 55 hours. They were called Zeppelins, named after their German ‘inventor’ Count Zeppelin. Did he really invent the technology or did the Germans have manuscripts with concrete inputs, for example which gasses are lighter than air?

It would be interesting to research.

Great Indian Scientists are Overlooked by the West

During the Colonial Era, the British did not support Indian scientists, as the example of Talpade showed. And even when Indian scientists discovered pathbreaking innovations like Jagdish Chandra Bose in wireless communication, the credit would be given to Westerners. Google “who invented the radio”, and you will get Western names, foremost Macroni. Even today Bose is excluded from Wikipedia.

I was intrigued when I read comments by Heinrich Hertz, who is described as a brilliant German scientist in the field theory of physics.

He wrote: “It is impossible to study this wonderful theory without feeling as if the mathematical equations had an independent life and intelligence of their own, as if they were wiser than ourselves, indeed wiser than their discoverer, as if they gave forth more than he put into them.”

He further said, “We perceive electricity in a thousand places where we had no proof of its existence before. In every flame, in every luminous particle, we see an electric process. Even if a body is not luminous, provided it radiates heat, it is a centre of electric disturbances. Thus, the domain of electricity extends over the whole of nature.”

This sounds like Indian philosophy. And what he says about mathematics, reminded me of Srinivasan Ramanujan. He received his insights in dreams from a source that indeed was “wiser than ourselves”, from his family deity Namagiri.

Incidentally, Hertz said this in 1889 during a lecture “On the Relations Between Light and Electricity”, which he delivered of all places in Heidelberg, the hub of Sanskrit learning in Germany…

Ancient Texts still in India Need to be Studied

Bibek Debroy says that out of 40 million texts in India even AFTER all the destruction and loot, only 5 percent are studied and translated.

Sanskrit, and concepts like “pure consciousness”, are much easier for Indians to understand than for Westerners. Is this one reason why Indian tradition is vilified so badly? To make Indians despise their culture and not study it? Are those powers afraid that Indians could zoom ahead not only in philosophy but also in science and technology? Why did several Indian scientists die an unnatural death in recent decades, starting with the nuclear physicist Homi Bhabha, or were badly defamed, like Nambi Narayanan?

There are many mysteries in India which cannot be explained and numerous ancient texts which still need to be studied.

For example: How and when were those massive temples and in particular Kailash Mandir be built? Was there ever a genuine enquiry? The Western narrative that most Indian temples were built “1000 years ago” may not be true.

Why would the sculptures show incredible details, moreover of things which were not supposed to exist at their times, like animals which went extinct lakhs of years ago or modern jetpacks?

Here is a screenshot of a video by Praveen Mohan on ancient flying machine. This ancient carving has all the features of a modern jetpack. Were there not only carvings, but also manuscripts with details? It is surely possible, and in all likelihood it is not known where which manuscripts are located and if they are secret.

Another important question: how did the ancient Indians map the sky?

Jyotisha is a branch of the ancient Vedangas. Surya Siddhanta is ancient. In the Ramayana alone, there are some 600 references to astrological constellations according to Nilesh Oak. How was this possible?

How long does one need to observe the myriads of lights in the night sky to discover that a few of those lights are close to the earth and not self-luminous? Incidentally, all ancient cultures knew not only about the planets, but also about their influence and nature. It can be assumed, all those cultures were linked, yet nobody asks questions how this knowledge was obtained.

Even today, we probably would not know much about astronomy, if we needed to rely solely on our intelligence, reason and observation, and had absolutely no literature to fall back to.

If they could do this stationed on earth, they were surely geniuses.

India is the only ancient culture which still survives. Strangely, instead of wanting to study and preserve it, the world seems intent to annihilate it.

What could be the reason?

Featured image on Indian influence on German scientists (for representation purpose only; all images in collage) sourced from Google.

This article was first published at the author’s personal blog: https://mariawirthblog.wordpress.com/2022/11/11/indian-influence-on-german-scientists/.

How Vedic Literature is the Father of Modern Knowledge; An Analysis