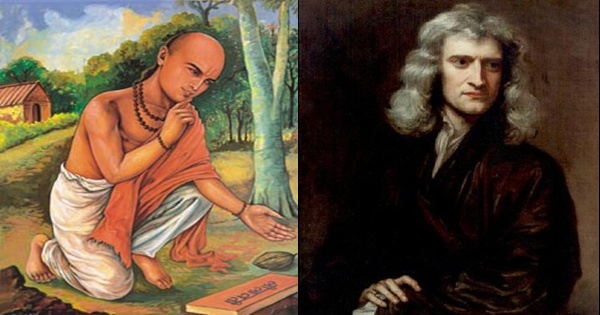 So, we have read in school that Sir Isaac Newton discovered the law of gravitation. This fact is imprinted in our mind. It is no exaggeration to say that Newton and Gravity are synonymous terms or two sides of the same coin! The very utterance of ‘gravity’ will definitely transport you to the terrain of Newton.

But do you know ancient Indian texts find mention of gravitation hundreds and thousands of years ago before Newton discovered it? Bhaskaracharya, also known as Bhaskara II, the great mathematician and astronomer from Karnataka, mentioned about the rules of gravitation in his books written in the middle of the 12th century.

There was another Bhaskaracharya, a great mathematician and astronomer from Maharashtra, dating back to the 7th century. He is known as Bhaskara I, to avoid confusion between the two great Gurus and writers of ancient India. While Bhaskara I wrote Aryabhatiyabhasya in Sanskrit in prose form, which is the oldest known book on Mathematics and Astronomy and two more books, Bhaskara II wrote Siddhanta Shiromani, a series of four books on the same subjects.

The Surya Siddhanta, a treatise in Sanskrit on Astronomy and Mathematics, was written in the form of rhythmic shloka (verses) during the late 4th century. The author of the book is unknown. Historians attribute the book to be written by Aryabhatta, an ancient Indian mathematician and astronomer. This book, having 14 chapters and 500 shlokas, have been rewritten and revised over time, with the same title being retained. In this book, Aryabhatta also gives a clue about gravity, about a force that holds the earth in the Universe.

More clues about the force of gravity has been indirectly described in ancient Indian texts dating back to thousand of years. The Prashnopanishad, which was written as a dialogue between Sage Pippalada and his six disciples (the discourse is believed to have taken place in 6000 BC) finds mention about the earth’s gravitational force.

In an interesting interlude between the teacher and the students about the five elements in the Prashnopanishad, the teacher explains about earth as one of the elements. According to him, the energy (of the earth and water) controls the downward movement in our bodies due to the gravitational pull of the earth.

Predictions and calculations concerning the solar system mentioned in the Surya Siddhanta are almost scientifically accurate. For example, the book mentions the earth’s diameter to be 8,000 miles against the modern accuracy of 7,928 miles.

Bhaskaracharya (Bhaskara II) added a commentary to this book under the name of Siddhanta Shiromani in the 11th century. According to his concept, as mentioned in this book (Lilavati treatise of the book series), the law of gravity is mentioned as:

“The earth has an attractive power by which, it draws toward itself any heavy object in the air…this attractive power of the earth shows why things located at a lower part, or at the sides, do not fall from its surface.”

We have read that Newton discovered the law of gravitation after he observed an apple falling from a tree. The world believed him. They are believing him. And they will believe him. Newton did rediscover this very concept on a broader scale compared to Bhaskaracharya and called it the ‘Law of Gravity’! But why the whole credit to Newton? Why no mention of our ancient Indian scientists?

In an international conference on the Vedas, held in February 2015, as reported by NDTV, G Madhavan Nair, a Padma Vibhushan awardee, India’s leading scientist and former ISRO chairman, said that ‘some shlokas in the Vedas mention the presence of water on the moon’. He said ‘astronomy experts like Aryabhatta knew about gravitational force much before Issac Newton’. He also said the Vedas and other ancient Indian scriptures contained ‘information on metallurgy, algebra, astronomy, Maths, architecture and astrology way before the western world knew about them’. NDTV  quoted Nair -“Even for Chandrayaan, the equation of Aryabhatta was used. Even the (knowledge of) gravitational field… Newton found it some 1500 years later… the knowledge existing (in our scriptures).”

Experts and scholars from ancient India discovered thousands of concepts concerning the universe and the solar system. This find mention in the Vedas and in several books written by astronomers and mathematicians. All of their calculations done at a time without the use of modern equipment like telescope, are scientifically proven to be closely accurate to modern day calculations.

No wonder, the world is gradually giving credits to few ancient Indian theories and inventions, though in a small scale. Ironically, many Indians themselves don’t believe their own roots and ancestors.