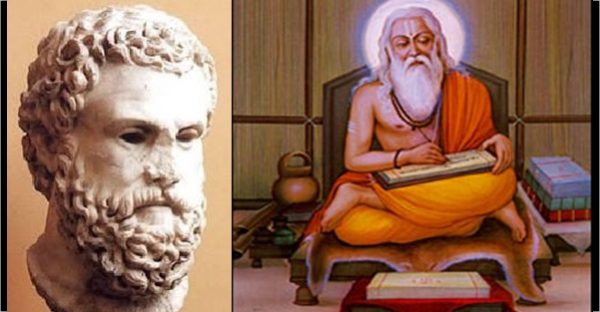 Who isn’t familiar with the Sapta Rishis, the seven great Vedic sages in Hindu tradition? They are Agastya, Atri, Bhardwaja, Gautam, Jamadagni, Vasistha and Vishvamitra. They are extolled in the Vedas and other Hindu scriptures and considered the patriarchs of the Vedic religion.

Atri is the last among the Saptha Rishis. He composed numerous hymns in praise of Agni, Indra and other Vedic deities. The Rigveda finds bounteous mention of him. The fifth Mandala of Rigveda, called the Atri Mandala is dedicated to Rishi Atri. It contains eighty seven hymns, which are attributed to him and his descendants. Besides the Vedas, Atri also finds mention in the Puranas, the Ramayana and the Mahabharata.

The sage was married to Anasuya Devi, considered one of the seven female pathivrathas. They had three sons, namely Dattatreya, Durvasas and Soma. The Ramayana finds mention of both Rishi Atri and Anasuya. Rama with Sita and Lakshmana visited Atri’s hermitage in Chitrakut during their exile. The sage and his wife welcomed them, showering them with the warmest of hospitality.

The Greek epic Illiad finds mention of Atreus as the king of Mycenae, a kingdom in Greece. His father Pelops was the king of Pisa. Pelops had numerous wives and many children. Atreus and his twin brother Thyestes murdered their half brother Chrysippus in their desire for the throne of Olympia. The king sent the two along with their mother Hippodamia into exile. They took refuge in Mycenae. After the king of Mycenae Eurystheus died in a battle, Atreus became his successor.

Atreus was married to Aerope, the daughter of king Catreus of Crete, an island kingdom of Greece. They are parents of Agamemnon and Menelaus. Collectively, descendants of Atreus are known as Atreidai or Atreidae.

Is Rishi Atri of India the Greek Atreus, the father of Agamemnon? To quote from an article on ancientvoice.wikidot.com by Jijith Nadumuri Ravi, a Mahabharata scholar, “The tribe of Atri (the founder of Atri Gotra) is mentioned in Iliad as Atreidai. Atri was one of the seven ancient sages (the Sapta Rishis). The seven sages were the founder members of several human tribes. Members of Atri’s family appear in Iliad. One example is Atreus. He was the father of Agamemnon, the king of kings mentioned in Iliad. Atreus’s descendants are known as Atreidai or Atreidae. In Mahabharata Atri’s descendants are known as Atreyas. Dattatreya was a famous sage in the line of Atri mentioned in Mahabharata. The Hittites called the Atreus as Attarsiya or Attarissiya which seems to be a corruption of the form Atri-Rishiya, which translates to:- the descendant of Atri-Rishi or sage Atri. This is found in the Hittite text on the ‘Indictment of Madduwatta’.”

Bhaktivejanyana Swami writes in Ithihaasa: The Mystery of His Story Is My Story of History, “An example I found on an excellent website discussing Ancient Greek names and comparing them to Sanskrit sources, suggesting that Sage Atri (Atreus, the father of Agamemnon mentioned in Iliad) was one of the seven Ancient sages (the Sapta-Rishis).”

The guess and the debate continues…