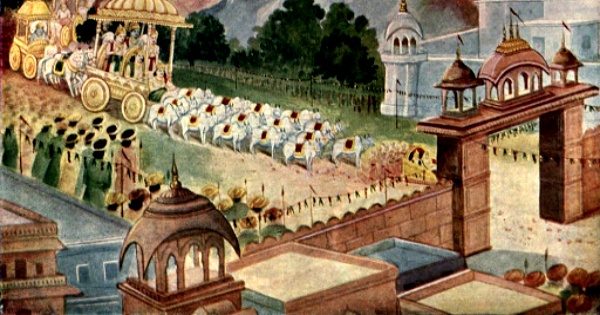 A proud civilization should showcase its culture in the most magnificent way, highlighting the ancient founders of its cities by building statues and symbols showcasing its ancientness.

The American US nation, despite its origins tracing back to only a few centuries, projects its founding fathers in great detail. Hollywood works to glorify the American culture however small it is, but Bollywood cares little about the Sanatana Dharma Samskrti which is many thousand years old and many thousand times richer. It is several times older than the American culture. While we hope that the current controversy in Bollywood will rectify our film industry at the end of this Samhara Tandava of truth, we can’t wait doing other important things to illuminate the glory of our Bharatiya Dharma Samskrti in the other ways possible.

Hence this attention onto our national capital Delhi!

The oldest reference to the Delhi region is in the Mahabharata where what is now Delhi to the west of Yamuna river is mentioned as a barren bush land called Kurujangala. Undeveloped, uncultivated barren land with full of forest bushes was known as Khandavaprastha to its south. The aridity of the desert (Maru) to its south-west has slightly encroached this region. Some Nagas were living in Khandava on top of an elevated southern hill, the northern end of the Aravali hills (known in Mahabharata as the Arbuda Parvata).

The Pandavas were given this uncultivable bush land as their kingdom by Dhrtarashtra so that he can later make his son Duryodhana as the king of the prosperous eastern Kuru Rashtra to the east of Yamuna and award the much wealthy city Hastinapura (the city of elephants) on the Western bank of Ganga as the capital of Duryodhana’s domain.

Actually this city Hastinapura was ruled by the father of the Pandavas, viz Pandu and it rightly belonged to the Pandavas with the eldest Yudhisthira supposed to be the king of Hastinapura. Pandu hadworked hard to increase the prosperity of Hastinapura by bringing much wealth from the kingdoms like Panchala, Dasarana, Kunti, Kashi, Magadha, Videha, Pundra and Suhma in his military campaign.

Due to premature ill health, Pandu had to retire early into the Satasringa forests in the Himalayan foothills (now in Uttarakhand) leaving the kingdom to his elder brother Dhrtarashtra. Pandu died in the forest. The Pandavas in their childhood returned to Hastinapura. Duryodhana tried to kill them in the Lakshagriha by setting it to fire at Varanavati (Barnava), but they escaped due to the intelligence of the wise Vidura. They wandered around and finally married Panchali at Kampilya (Kampil) which turned their luck. When the Pandavas thus returned to Hastinapura with prosperity, Dhrtarashtra send them to Kurujangala asking them to rule there, instead of handing over the throne of Hastinapura to Yudhisthira who was its rightful heir.

The mother of the Pandavas, viz Prtha (famous as Kunti since she was the princess of the Kunti Rashtra) had a brother Vasudeva. His son was Krishna. He was much fond of the Pandavas and noticed their hardships right from the childhood much like his own childhood full of hardships. He met them at Kampilya during Draupadi Swayamvara. Knowing that the Pandavas were given a waste land as their kingdom, Krishna thought about how he built Dwaraka in the abandoned island of Kusastali in the western ocean with the help of Vishvakarma.

Krishna joined the Pandavas in building a new city from scratch. Years of hard work paid off and a grand white colored city arose on the western banks of Yamuna under the guidance of Yadava Krishna and Pandava Arjuna, his friend and cousin-brother. Arjuna was in charge of all construction works.

This region between Yamuna, Drishadvati and Sarasvati was formerly ruled by Indra, during the reign of the ancient Adityas. It was then known as Brahmavarta, the domain of Brahmarshi sages, the Yajnavedi of Brahma, the playground of the Devatas, the Swarga, Swargadvara etc. Places named after the Aditya devatas, like Indra, Varuna, Mitra, Aryaman, Bhaga, Pusan, Vivasvat, Vivasvat’s sons Yama & Manu, Manu’s daughter Ila are plenty in this region. Brahmavarta later became the land of Kurus, starting with the forefather king Kuru and hence it became famous by the new name Kurukshetra. In memory of Indra, the city was named Indraprastha. Indra was also the pitru-devata of Arjuna, the city builder in-charge.

Krishna and Arjuna cleared the Khandava forest to the south of Indraprastha which was inhabited by the Nagas like Takshaka who also worked as the spies of Duryodhana. They spared the Danava architect Maya who was living there and he became an ally of the Pandavas. Maya built the famous Sabha for Indraprastha where Yudhisthira conducted his Rajasuya. It was in this Sabha that Krishna killed Shishupala and where Duryodhana got confused between water and the shiny reflective floor and felt humiliated, leading to the events that culminated in the Kurukshetra War.

I have created the painting below (picture 1) based on these events. The Five Pandavas with Krishna and Maya Danava looking at the white city Indraprastha and the newly built Maya Sabha to its south (bottom).  All buildings of Indraprastha were painted white. Maya Sabha structure had a highly reflective floor that resembled water surface made of crystals from the Himalayan mines. 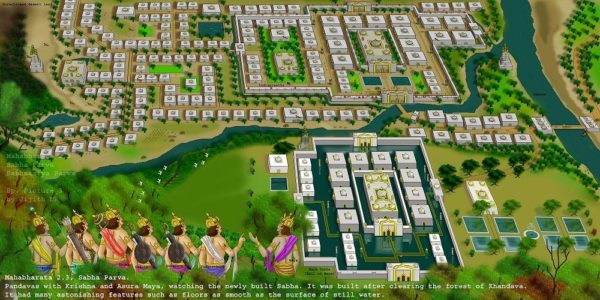 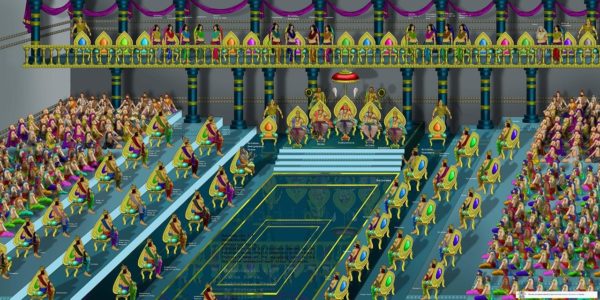 Picture 3 shows my paintings of Mayasabha and Indraprastha exhibited in front of the National Museum Delhi as part of the Indraprastha International Conference held in 2016 by Draupadi Dream Trust lead by Smt Neera Misra, where I also presented a research paper on the Yamuna Sarasvati Region. The proceedings and the paper submissions of this conference can be read at ISBN 13: 9789386223678 – Indraprastha Revisited, BR Publishing Corporation, 2017. 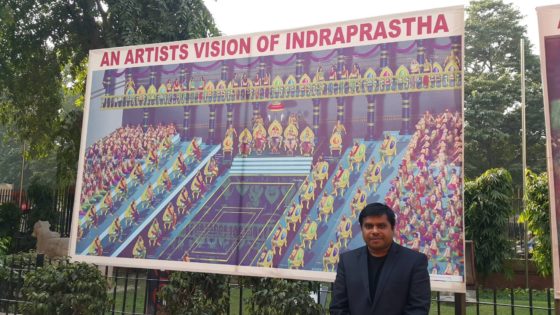 This conference passed a resolution to rename Delhi as Indraprastha. This is a civilizational milestone we need to achieve, like the start of the reconstruction of the destroyed Ayodhya Ram Mandir.

This is justified because Mahabharata with its Rajasuya narrative shows the position of this city founded by Krishna and Arjuna, as the capital of Bharatavarsha with Yudhisthira as the emperor. All the contemporary kingdoms of Bhararavarsha and even the far away mountainous kingdoms like China brought tribute to Yudhisthira. Thus Indraprastha turned a cosmopolitan capital city at such ancient period, under the rule of the Pandavas!

It is also important that we create a grand statue for Krishna and Arjuna, like the Patel statue at Narmada, as the founders of Indraprastha – Delhi, at a key place in Delhi.

Writing this to create this thought in our national consciousness: Delhi renamed as Indraprastha, Krishna and Arjuna as the founder of our capital city with the statues and monuments proclaiming it auspiciously!!

How grand such a vision will be? Isn’t that the most befitting tribute to our Bharatiya Dharma Samskrti?

Afghanistan Was Part of Rgvedic Horizon: A Historical Analysis