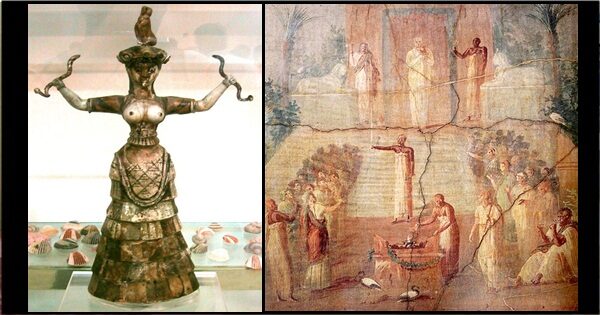 Goddess ISISI of Egypt/Greek/Romans is surprisingly similar in characters to “Durga”. She is also shown standing on a lion, like Chamundi. In its oldest form a statue of ISISI was unearthed holding 2 serpents in her hands. The statue belongs to 1600 BCE (In the city of Knossos of Crete, Sir Arthur Evans had found the famous ten-inch high statuette of the “snake goddess” holding serpents in her hands).

It is important to note that the Greeks had called Isisi the Goddess with ten thousand names or Isis Panthea (”Isis the All-Goddess”). This is similar to Indian gods with Sahasranaama.

This (image attached below) is worship of goddess Isisi by the Greeks and Romans, as they painted it themselves. As you can see, they used a ‘Fire altar’ in the worship of their gods. This was the practice in western world even in 4th CE. So, fire worship as part of religious procedure was same among all three ancient religions (India, Mesopotamia, Greece) of the world. The Vedas being oldest, we can infer, India is the origin for this practice. Indians propagated their religion/ideas throughout the world in ancient time itself successfully. And people adopted it. 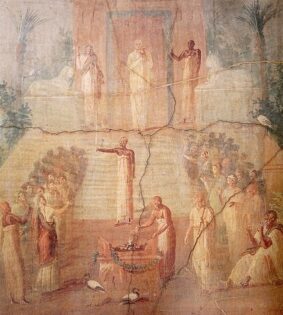 ISISI was worshiped by the Parrhasians, who migrated from Crete to Europe (Paris area) and later became known as the Parisii. Due to Parisii we have the famous city “Paris” today. The famous Notredame Church was the main temple of ISISI. In 1163 CE, this famous temple was rebuilt as a church, with the name Notre-Dame de Paris = Our Lady of Paris (meaning of French name Nottredame).

Other groups of people with similar name construct are “Persians”.

Persia-Paris-Paarasika-Parthians! Parisi migrated to Paris from Crete. The town of Parrhasia is mentioned by Homer. This island of Crete is near AsiaMinor (or today’s Turkey). This co-habitation implies, “Persians” and “Parrhasians” must have originated from the same tribe. That is why they lived so closely (Turkey and Iran). 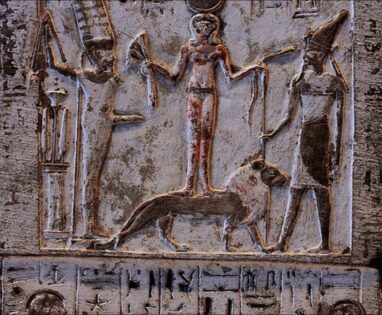 Iranians, as we know today were called Persians officially in the past (as recent as 1940-50’s). As per western theory, “Persian” word came from another word ‘Parsa’. Historians refer to some central Asian region of “land of Parsa”.

But that is not the way Parsa word originated. Manu Samhitha has a clear cut proof. It says lot of groups originated from Ksatriyas. Here is a shloka from Manu Samhita:

“Paarada” is one of them. Paara is a sanskrit word. We have it as part of Dwapara/Paramartha /Apara etc. So, para is extensively used in Sanskrit. “Para” means “beyond”.

Ancient India considered river Sindhu as the western boundary of the Vedic holy land. Non-vedics were sent out of the boundary (even today administration sends criminals out of the territory). These outclawns were called “Paaradaa”. Correct word in sanskrit is “Paarasya”. It means people staying beyond border. Word “Paarasya” also comes in many text. This “Paarasaya” (meaning debarred people) has become “Persia”.

Central Asian territory called “Parsa” did not give the basis for origin. In fact original Parsa is territory starting from west bank of river Sindh. These Paarasya/Paarada people migrated out, settled in “central Asia”. So, the territory must have also got the name “Paarsa”. Paarada/Paarasya people originated the name “Persia”. These ancient Persians built Achaemenid city (in fact their capital) called “Parsaragadde”, a famous heritage monument today in Iran. The migrating “Paarasya” also originated “Parrhasians” of Crete. These “Parrhasians” migrated and settled in Europe, creating the famous city “Paris” today. They are connected by nomenclature to India.

Only Sanskrit can explain the true meaning & origin of word “Paarsa”/Persia/Paris.