What DNA Samples and More Tests Reveal about Ancient Indians 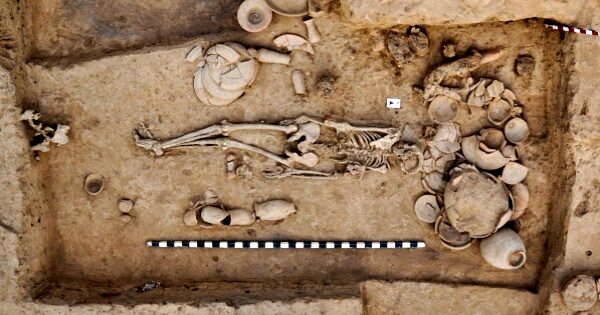 It has been substantiated by many world scientists, archeologists, geologists, and biologists that ancient Indians were great in all respects whether it was culture, Science and Technology, Management, Economics, Environment protection and Education system. What made Mortimer Wheeler, Max Mueller and Thomas Macaulay to write against this great nation, its ethos and faith with fake narratives? The purpose of this completely forged narrative is to create a good image of Britishers in the minds of Indians. That whatever they did in 200 years was not different from the Aryans 4500 years ago, thus creating the fake Aryan invasion and migration theory.

The so-called Indologists wrote that Aryans came from central Asia, Europe and few more destinations however, no one could write the exact origin of Aryans. This theory was not supported with concrete evidences, it was just mere an eyewash to create confusion among Indians.

Another reason was that the acceptability, vast knowledge, deeper scientific roots and technological development in that period created an inferiority complex amongst many foreigners. Therefore, they wanted to create an impression in the minds of Indians that we Indians should feel ashamed of our own culture and faith and develop “slavery mentality”.

What is the Reality?

Through different research works and with the use of techniques of modern science and technology, it is proved that Aryans originated from the Indian soil and there is no difference between Aryans and Dravidians (mostly residing in South India).

Aryan Invasion Theory (AIT) has been proved wrong by evidences, which came in light by subsequent methods:

DNA study conducted in Tartu University, Estonia with 13000 samples, led by Prof Kivisild of Cambridge University evidently substantiated that ancient Indians, i.e. the ancestors of Aryan and Dravidians were same. This means the differentiation in AIT was actually a misadventure to create rift between Indian communities. The samples collected were from different castes, sub castes, and people residing in different parts of India. Samples were also collected from Pakistan, Bangladesh, Sri Lanka and Nepal – regions that were part of ancient India. The DNA samples collected from the North India exactly matched with that of South India.

Indian and American scientists also carried out similar studies at Harvard University and found out that Aryans, Dravidians belong to same ancestors, and even this caste concept is very irrelevant as everyone has same ancestry. Therefore, this discrimination on caste basis was also a game plan by invaders, especially Mughals and Britishers.

A recent study on the structure of a woman found in Rakhigadhi, Haryana, which is 4500 years old as per carbon dating, revealed startling facts. The DNA testing concluded that her DNA does not match with the central Asian or Europeans at that time. This proves that AIT was a well-planned fake narrative to put down India on a global platform and to destroy Indian culture and faith. It is a plan to divide Hindus on caste basis to make it easier for conversion coteries to convert Hindus.

US Landsat found first evidence of Saraswati River in 1970. Further studies by various geologists and archaeologists with various artefacts, paleochannels, and traces of river, drilling operation and many more evidences proved that Saraswati River was prevailing along with Indus (Sindhu) river. Saraswati River was the largest and longest river at that time flowing from the Himalayas to the Arabian Sea with approximately 4600 kms in length and 6 to 8 km in width.

The town planning of various cities at the banks of river was of the highest standard and best in the world. Researchers found different types of equipment, materials made up of metal and its alloys. Therefore, there was no concept of Dravidians and Aryans in ancient Indians, everyone used be in harmony with each other following Vedic principles and at the same time growing socially and economically maintaining balance in the environment.

Saraswati River vanished due to severe earthquakes resulting in changing the direction of rivers like Yamuna and Sutlej. This has resulted in less water in Saraswati; main influx of water was from these two rivers. Later on, monotonic monsoon dried the river. Ancient Indians started migrating to other locations to meet the daily needs and grow socially and economically again. Actually Hindu civilization spread all over India and some parts of Asia and Europe and not vice versa.

Even in Rig Veda, there is mention of Saraswati River. The way the great epics like Mahabharata, Ramayana were written in depth in that period. Why have they not mentioned about Aryan invasion in any book or scripture? The reason is that nothing of this sort happened during that era.

How AIT Theory Affected the Socio-economic State of our Great Nation?

The false AIT theory created a divide to some extent between the people of South India and rest of India. Many Dravidians (especially residing in South India) had taken this theory to the core of their heart; this has created a gap between sons of the soil.

Those intellectuals who believes in AIT, seriously needs to introspect and study the scientific aspects of it and stop spreading hatred among Indian communities.

We need to cherish our great heritage and past forgetting all the differences mainly created on caste basis and unite to bring back the glory and lead the world spiritually, socially and economically to uplift every living being on this planet earth.

Pankaj Jayswal is an author and a blogger. He writes in English, Marathi and Hindi on topics ranging from Politics, Technology to Spiritualism, History, and more.