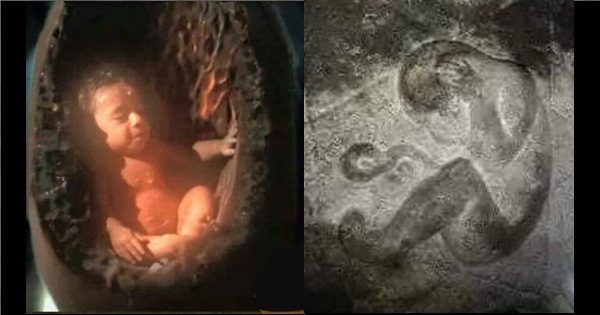 Motherhood is bliss. Where scientific, medical, and technological advancements have bridged the gap between the impossible and possible, infertility and motherhood are no longer antonymic. Artificial insemination like IUI (Intrauterine Insemination), IVF (In Vitro Fertilization) and surrogacy have brought smiles to millions of infertile couples.  While it is legally allowed for infertile couples to opt for IUI and IVF, surrogacy is still bound by legal decree. According to the Surrogacy (Regulation) Bill, surrogacy was limited only to close relatives. Recently, a Select Committee of the Rajya Sabha recommended this clause be removed so that infertile couples face less hassles. This is the present scenario. Was surrogacy followed in ancient India? Was artificial insemination popular thousands of years ago? Hindu scriptures and historical chronicles find mention of numerous examples of these advanced practices. No wonder India was highly advanced in every field in ancient times!

In addition to artificial fertilization, there existed in ancient India a practice known as Niyog Pratha. This practice was followed by young widows who did not have children when their husbands were alive but sought motherhood, infertile women, and women whose husbands were impotent. The chosen male for the act, in today’s times, may be called a surrogate father. A revered person, who may or may not be related to the woman, was chosen for the surrogate fatherhood. More often, it was the brother-in-law of the woman, who became the surrogate father. There were clauses associated with the niyog process. That the chosen man would have no claim over the child, that the act would be only for rightfully bearing a child and not for pleasure, that he would be allowed a maximum of three times, that while performing the act both partners should not be driven by lust or passion, and that the man and the woman would neither see each other’s face nor involve in foreplay during the sexual act. Niyog Pratha is described in the Manusmriti and the Mahabharata. In the Mahabharata, the widows of Vichitravirya Ambika begets Dhritarashtra and Ambalika begets Pandu through Niyog Pratha. The revered man, a Rishi, chosen for the act was their brother-in-law Ved Vyas. One of the queens’ maids begets Vidura through the same process by Rishi Ved Vyas.

Niyog Pratha was also practiced before the Mahabharata times. This finds mention in the epic itself. Candrabali Tripathi and Chandra Mauli Mani wrote in their book The Evolution of Ideals of Womenhood in Indian Society, “…the Mahabharata does quote examples which prove existence of niyoga prior to Mahabharata times….when issueless Pandu requested Kunti to produce a child through niyoga, she had refused at first and Pandu had to quote the ancient example of niyoga by Damayanti, Queen of Saudasa, with Vasishtha to produce son Ashmaka.” 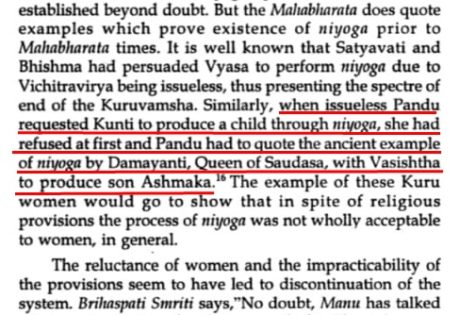 Over time, the practice of Niyog Pratha was discontinued with very very few exceptions the reason being the reluctance of the women involved. Even Ambika and Ambalika were reluctant, so was Kunti. Candrabali Tripathi and Chandra Mauli Mani wrote in the same quoted book, “The example of these Kuru women would go to show that in spite of religious provisions the process of niyoga was not wholly acceptable to women, in general. The reluctance of women and the impracticability of the provisions seem to have led to discontinuation of the system.”

In short, surrogacy is ‘womb on rent’. There are hundreds of instances of the practice of traditional surrogacy that find mention in the scriptures and epics. The episode on Rishi Galava and Madhavi in the Mahabharata describe events where Madhavi becomes a surrogate mother on four different occasions. Galava was a devoted shishya (student) of Rishi Vishwamitra. Upon completion of his education, Galava requested Vishwamitra to ask for anything as gurudakshina. Vishwamitra refused to take anything. Galava insisted multiple times and every time Vishwamitra refused. At last when Galava continued asking, an irritated Vishwamitra asked for something impossible – 800 white Ashvamedhi horses, each having one ear that was black. Galava moved from place to place in search of the horses, but in vain. He then approached Raja Yayati, famed for wealth, but he did not have white Ashvamedhi horses. Yayati gave his daughter Madhavi, who was known far and wide for her virtue and virginity, to Galava. The course of events that took place after this pertains to traditional surrogacy. Galava came to know that three kings – Haryasva of Ayodhya, Divodasa of Kashi, and Ushinara of Bhojanagari had the white Ashvamedhi horses. He struck a deal with them each in turns offering Madhavi to beget a son each for each against exchange of 200 Ashwamedhi horses each. Madhavi agreed too. Hence in few years Madhavi gave birth to a son each for each of the three kings. Galava now had 600 white Ashvamedhi horses. 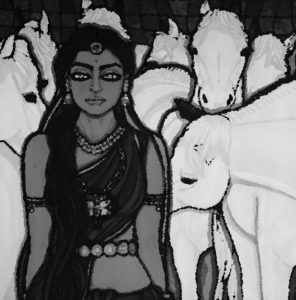 Madhavi left the royal palace where she was a surrogate mother and accompanied Galava in search of the remaining 200 horses. Not finding any more horses Galava visited Vishwamitra’s hermit and offered him the gurudakshina of horses, less by 200 of the total count. He offered Madhavi to fill up the count of the remaining 200 horses. Vishwamitra accepted. Madhavi bore a son for Vishwamitra too. Later Vishwamitra sent Madhavi back to her parental home. Yayati arranged a swayamvar for his daughter. Many kings and princes from near and far, including Haryasva of Ayodhya, Divodasa of Kashi, and Ushinara of Bhojanagari, who had a son each by Madhavi following traditional surrogacy, also wanted to marry her. But Madhavi retired to the forest and started living the life of a recluse. Bhisham Sahni wonderfully retells this story of Madhavi in his book Madhavi.

Gandhari’s motherhood is an example of in vitro fertilization from the Mahabharata. Gandhari had a prolonged pregnancy and instead of a baby, she delivered a mass fetus. Modern medical records do describe prolonged gestation, which is considered a case of pseudocyesis. Rishi Ved Vyas examined the mass and found 101 normal cells in it. He separated the 101 cells and put each in a nutrient medium in earthen pots. Each pot was incubated and grown in vitro till full term. The incubation turned out to be successful. After the full term, the first of the 101 children to be born was Duryodhan, followed by 99 more sons and one daughter, namely Dushala. Though the Mahabharata doesn’t describe in detail the in vitro process, the successful conception and birth outside the womb gives us an insight about advanced scientific techniques and facilities and the effectiveness of Ayurveda in ancient India. Mahabharata events are history, not mythology. And many historians have proved its historicity, establishing timelines based on astronomical calculations, oceanographic studies, and literary evidences. While according to Nilesh Nilkanth Oak, the Mahabharata timeline dates back to 7500 plus years, according to Vedveer Arya, it is 5200 years ago. Going by these timelines, in vitro fertilization practice was followed more than 5000 years ago. 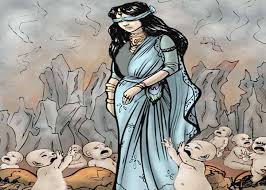 The Bhagavat Purana finds description of embryo transplantation. Kansa kept Devaki and Vasudev confined in a cell in Mathura as he was forecasted to die at the hands of one of the many children born to Devaki and Vasudev. Rohini, another wife of Vasudev, stayed at Nandaraja’s place in Vrindavan. Kansa slaughtered six children born to Devaki, one after another, immediately after birth in the cell. For the seventh child of Devaki and Vasudev, an embryo transplantation occurred. The foetus from Devaki’s womb was transferred and transplanted in Rohini’s womb. This foetus was later born as Balaram. Devaki experienced flow of blood, which looked like a miscarriage, but it was actually the consequence of the transfer of the embryo.

Administration of an oral agent to induce ovulation is common in today’s times. The Mahabharata also finds description of this gynecological practice, called assisted reproductive technology (ART) in medical terms. Raja Brihadrath, a descendant of Kuru and the king of Magadh married the twin princesses of Benares. Even after several years of marriage he remained fatherless. Upset and discouraged over his inability to beget any children, he retreated to the forest and offered himself at the service of Rishi Chandakaushik. But he always remained sad. After several months when Rishi Chandakaushik learnt about the cause of his depression, he gave a mango to the king and asked him to give it to his queen for eating and assured him of fatherhood. Many Rishis in ancient India were also experts in Ayurveda. The mango here was the oral agent (infused with Ayurvedic medicines) for induction of ovulation. A joyous Brihadrath returned to the palace, divided the mango into two, giving one-half to each of his two queens. Each queen gave birth to a still-born‘half-child’. Brihadrath ordered his men to throw the two lifeless halves in the forest. A demoness, namely Jara found the two lifeless halves lying on the grass. She picked them up and put them in her palm, joining them. Suddenly, the two halves became one, transforming into a living child. The cry of the child invited the attention of soldiers. They took the demoness along with the child to Brihadrath’s court. A rejoiced Brihadrath caught hold of his son. He thanked Jara for giving life to his son. The king immediately named the boy ‘Jarasandh’, which meant ‘joined by Jara’. Though the Mahabharata doesn’t describe in detail how Jara joined the two halves, it did involve a process. This story of Jarasandh and his entire course of events from life till his death is described in my book The Eighth Avatar.

The Mahabharata also finds mention of several instances wherein males attained fatherhood without gestation of the fetus in a woman’s womb. That was how Dronacharya, the royal teacher of the Kauravas and Pandavas was born. Dronacharya was the son of Rishi Bharadwaj, a scholar, physician, and economist, who contributed verses in the Rigveda and Puranas.  Rishi Bharadwaj preserved his semen (which he ejaculated after he saw a beautiful apsara named Ghritachi in the Ganga) in a clay pot. Probably Bharadwaj employed use of herbs and techniques for gestation of the semen in the pot that facilitated maturing of the semen into a fetus and ultimately the birth of a boy. The birth of Drona is another example of the gestation of a fetus outside the human body, somewhat similar to the gestation of the 101 cells from the fetus of Gandhari.

There are several more examples from the scriptures that prove artificial insemination, administration of oral agents to induce ovulation, surrogacy, in vitro fertilization, embryo transplantation, and related artificial reproduction techniques were followed in ancient India. In medieval India, we find several sculptures from temples that depict the several stages of growth of the embryo. The invention of the microscope or ultrasound is a modern phenomenon.The Garbhopanioshad describes in detail the complete fertilization process and everything associated with child-birth, pre- and post birth care. But how did ancient Indians perceive the growing stages of embryo without these instruments and sculpted the phenomenon in stone is still a mystery! Ancient Indians were far more advanced compared to the present!! 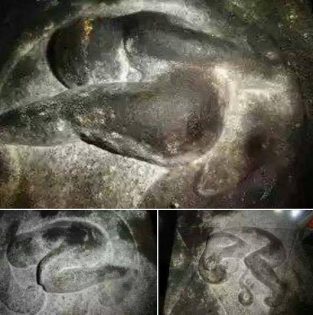 1. The Evolution of Ideals of Womanhood in Indian Society by Candrabali Tripathi and Chandra Mauli Mani

3. The Mahabharata, the complete Adi Parva by P Lal