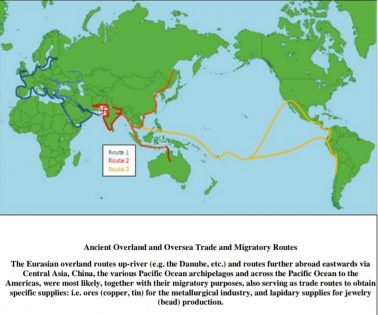 The illustration of the above chart is from a radically novel ‘Out of India’ (OIT) migration hypothesis. The chart is updated to include the latest genetic findings from Australia.

This ‘Out of India Theory’ hypothesis proposes that between 8,000 and 3,300 years ago, multiple group migrations took place from the Indus Valley along routes that went BY SEA – more so than just over land.

Based on genetic data and linguistic evidence, it is shown that seafaring Indus Valley people migrated in wave-like fashion to a vast number of coastal lands and islands THROUGHOUT the entire world. (Please, access the academic paper: https://drive.google.com/…/0B4YT9_fTsOiGcTViVVVNU2wzR…/view…)

That the language these migrants spoke was Sanskrit, is based on the discovery of numerous narrative, cartoon-like depictions engraved on dozens of Indus Valley seals that show story themes that appear in the earliest Sanskrit literature: the Ramayana, the Mahabharata, and the Puranas. (Please, access: https://www.academia.edu/…/Skanda_-_An_Ancient_God_Rediscov…) 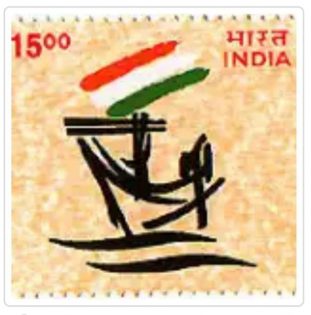 A postage stamp featuring one of the the earliest depictions of an Indus Valley Civilization boat as found on a pot sherd from Mohenjo Daro.

Over time, the migrants’ Sanskrit and the local tongues intermixed and formed various dialects. These dialects eventually developed into a variety of Indo-European languages.

As per Uschi Ringleb [1], the Malayo-Polynesian languages in the Pacific Ocean also acquired Sanskrit words and characteristics.

From the Indus Valley delta to what is now Iran, Iraq and Saudi Arabia, then through the Red Sea to the Mediterranean lands (including northern Africa), and subsequently via the Strait of Gibraltar to the North Sea’s coastal lands, and from there to the Scandinavian and Baltic Sea coastal regions. 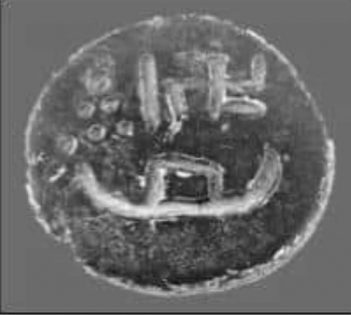 A circular seal from Dilmun (Persian Gulf) with a cabin structure, a swastika and Indus Script signs.
“The Dilmun civilization was the centre of commercial activities linking traditional agriculture of the land—then utterly fertile due to artesian wells that have dried since, and due to a much wetter climate—with maritime trade between diverse regions such as the Meluhha (suspected to be Indus Valley Civilisation), Magan (Oman), and Mesopotamia. Source: Wikipedia

Land crossing migrations into north, north-east, central and southern Indian regions where the migrants merged with existing populations and cultures. At the same time also, coast hugging seafaring migrations took place around India’s mainland coasts reaching up to what is now Chennai.

Seafaring, ocean crossing voyages to Sri Lanka, Central Asia, the Pacific Ocean’s archipelagos and the Americas, AND according to the latest findings, even to Australia as shown on the chart by the red line in Australia. (Please access a recently published article that expands on this Out of India Theory hypothesis: https://m.phys.org/…/2013-01-gene-india-australia-years.html)

A note about what is now the Suez Canal region: Due to a number of warming periods that ended the Younger Dryas Glacial Period, the region that is now the Suez Canal Zone, was periodically inundated and easily navigable. Sea level rises as high as 7 meters when compared to today, enabled Indus Valley migrants to navigate that region freely.with their flat-bottomed read boats. 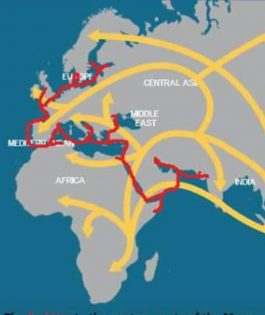 The seed of this Out of India Theory hypothesis originally formed in the fertile mind of a 13-year-old boy, Wim Borsboom, who at the time lived in The Netherlands.

It took some time for his seed idea to germinate, mature and bloom, but eventually in 2013 he posted his ideas on Academia.edu. Here is his story:

“That seed idea developed 62 years ago, when I was an inquisitive 13 year old Dutch teenager who, among other things, was studying German in college. Hm… you probably wonder why German is important to my discovery?

It so happened (in 1957) that I sweetly enjoyed a one week ‘teenager fling’ with a young German girl, Frederika, who was, like me, also 13 years old.

She was with her parents staying with our family in my birth-town Delft, the princely city of the painter Jan Vermeer and Newton’s scientific competitor Antony van Leeuwenhoeck. They were specifically visiting our town Delft where her father – who had been a hospital supervisor in Delft at the end of WW II after his wife had just given birth to their daughter – wanted to meet my mother and hopefully me as well.

You see, he had first encountered my mother 13 years before, when she dramatically rescued me (I was close to dying from diphtheria and dysentery) from his hospital, telling him while she rushed off with me in her pram, ‘I would rather have Wimmy die in my arms and at home than here in this hospital!’

I obviously and luckily survived long enough to meet his daughter Frederika who just like me, you guessed it, was also 13 when the two of us went for daily walks into town… me practicing my German and… she hesitantly trying to avoid holding my hand.

It was on one of those meanderings through Delft – which like Amsterdam is also a city of canals and bridges, but much smaller – that I noticed something peculiar about her German speech, specifically that her pronunciation and articulation was quite different from the college German that I was studying. Dutch, my native language, is supposed to be a German language offspring, a dialect that had turned into a language. Hearing Frederika speak though, and noticing how her parents so, eh… ‘sloppily’ (I thought) articulated their native German, I felt that the opposite was more likely… that German was actually a dialect derived from Dutch. In fact, I, the snotty nose whizkid that I must have been, concluded and decided at that point that the German language WAS in fact a Dutch dialect.

Over time, this ‘German is a Dutch dialect’ became my usual joke every time I met a German or when the topic came up – one time even in class to an astonished German language teacher who lacked a sense of humor. (I had to make it a joke, because I could not expect that anyone would take my observation seriously.)

In the years following, while learning Latin, Greek, English and French, I discovered that most – if not all – coastal European language and dialect pronunciations (e.g. Scottish and the French Bretagne dialect) were quite distinct, they were more sharply articulated in their pronunciations than inland continental European language and dialect articulations… they tended to have softer consonants.

This deep-inland peculiarity, in general characterized by their softer consonants and umlauted vowels, made me conclude that the coastal, more sharply pronounced versions of INDO-European languages had much in common – also etymologically – with Sanskrit. (I was at the time, in 1971, studying Sri Aurobindo’s writings and had learned to read the Bhagavat Gita in its native Sanskrit and its Devanāgarī script.)

Around the year 2000, while thinking about coastal European languages and certain local coastal dialects (e.g..Scottish), I had an ‘Aha’ moment.

This sudden insight happened at the same time I had become interested in the Indus Valley Civilization and came to know about the attempts to interpret its seals’ depictions and the decipherment and translation attempts of the script characters that were engraved on the seals.

At that time, I was already quite aware of how reed boats could make trans-oceanic voyages (Thor Heyerdahl). So, when I found that two Indus Valley Culture tablets featured reed boat engravings (see the illustrations below), I concluded that my intuition about ancient seafaring, coast-hugging reed boat migrations from the Sapta Sindhu delta westward to Mediterranean and European coastal areas (and, as I found out later, also southward and subsequently eastward) must have been possible.” 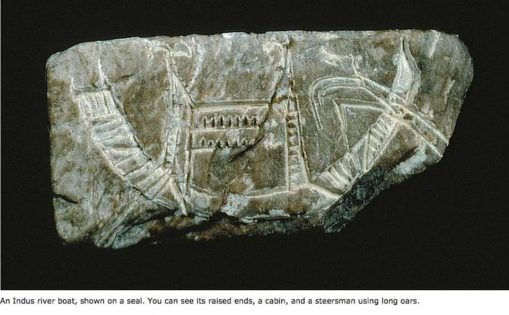 I speculated that over time a rudimentary early form of Sanskrit had gradually developed into a variety of dialects – dialects that eventually turned into the various current Western languages.

Notice that the top part of this seal from Dilmun shows a seaworthy vessel with a cabin (seemingly woven) that typically appears on ancient Indus Valley reed boat depictions.

Of course I went deeper into the then – and still -current, but in my opinion flawed migration theories: the Kurgan or Steppes theory, as well as the Anatolian and Armenian theories. I found them lacking enough convincing linguistic and genetic evidence that they were solely responsible for the spread of Indo-European languages from Central Asia, Anatolia or Caucasian regions into western Europe.

Fortunately, by about 2010, more genetic data became available which enabled me to trace a number of mtDNA haplogroups. Lo and behold, I found that certain Indus Valley region mtDNA haplogroups also appeared in ancient mtDNA found in large numbers of ancient skeletons from locations in Mediterranean and Northern Europe’s coastal locations, which justify the Out of India Theory.

It was then that I seriously started writing about my inklings, and in 2013 I published them on Academia.edu.

In 2017, my first academic paper on this radically new “Holocene Indus Valley Coastal Migrations Hypothesis” or in short, the Out of India Theory, was published in Varanasi and officially presented at Kolkata’s Indian Indian Museum to a standing room audience.

By the end of 2018, the organizers of the first “Inaugural Conference on Indic Chronology” invited me to come to New Delhi, and February 2019 I officially presented my paper to an academic audience.

Thus, in a nutshell, the history of my Holocene Indus Valley Migration Hypothesis… 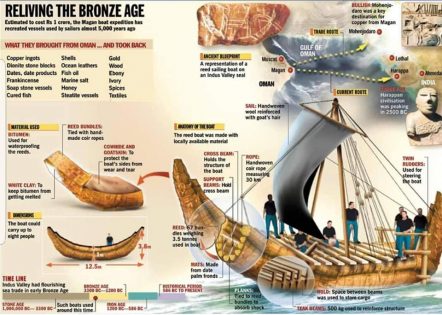 Over an extended period of time, the Indus Valley – the Sapta Sindhava Delta – underwent many challenging periods which in the end, about 3,300 years ago, caused the collapse of the Indus Valley Civilization. 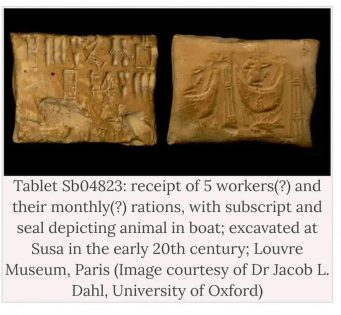 The migrants initially started out with reed vessels and over time sailed to:
a. Mesopotamian coastal areas,
b. Oman, Eritrea, the Horn of Africa,
c. Via the Red Sea coast’s wadis into Egypt,
d. Through the Suez Channel / Straight (from 6 mtr to possibly 10 mtr higher sea-levels enabled easy sailing) to the Levant,
e. Anatolia,
f. The Black Sea areas,
g. Into Eurasia (up- and down-stream rivers).
h. Egypt (up the Nile)
i. ALL Mediterranean coast lands from what is now Kroatia (etc.) to North African Berber lands and Greece, Macedonia, Italy, Crete, Southern France, etc. in between,
j. Through the Straight of Gibraltar to parts of Portugal, Spain, Basque Country,
k. Britanny, Scotland and French Bretagne,
l. Denmark, Northern Germany (also ancient Batavia) , Poland,
m. Baltic Sea countries, e.g. Scandinavia, Lithuania, etc. 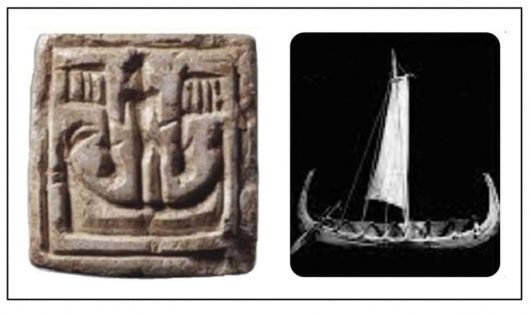 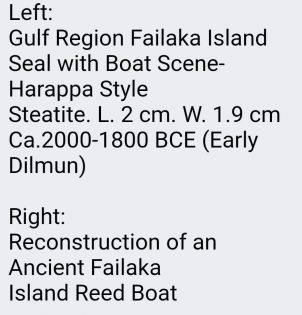 Landlocked migrants traveled on foot to:
a. the Himalayan foothills,
b. Ghandhara and Balochistan (where the Harappan Culture ancestors originally came from),
c. through the Khyber Pass into Bactrian regions and into
d. Eurasia,
e. North East India (down the Yamuna and Ganges),
f. South and East India,
g. South East Asia. 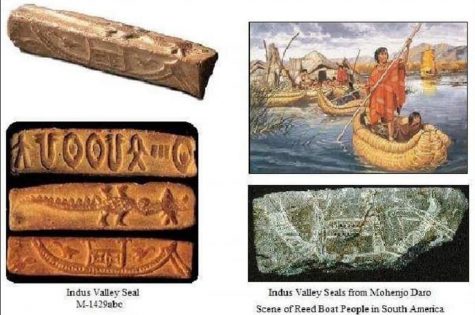 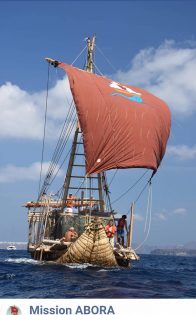 Images in this article on Out of India Theory provided by author.