Vanara without ‘Tail’ but a Fabulous ‘Tale’: What the Mauryan Period Bas Relief Says 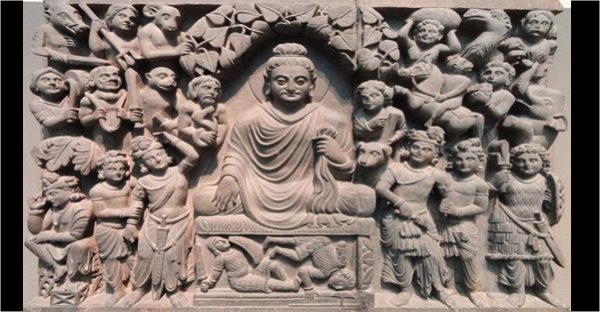 Decoding a Mauryan event from ‘a stupa’ panel. It definitely gives a lead to interpret Vanara army of Ramayana. From the head dress, it is evident that, the panel is a ‘Mauryan’ time sculpture.

Look at the sculpture below. It has lot of symbolic representation. Let us decode it one by one. The event is all about a meeting to discuss and decide to participate in a war. The meeting is happening in a Buddhist temple. Various parties ganging up together for the war have assembled.

1) We see two people fighting below Buddha’s statue. This implies, the issue to be decided is related to a fight and issue is now submitted before the lotus feet of “Buddha” for Judgment. The Fight surprisingly is not between “Indians”. It shows two foreigners. They are foreigners, as they wear armory. So, it is about a war between two kingdoms. The left guy seems to be a Western Scythian, (Graco-Iranian), further west from India. He has a conical helmet, a twin blade sword and a non circular (possible square or triangle) shield. The right hand guy (who has been toppled) seems to be a Parthian guy, eastern Indo-Iranian. He is using a bulged round shield. The shield is fallen out of hand and can be seen in right corner behind his head. He uses a battle axe, fallen on the ground. Also seen near his head.

Both fighting men are wearing leather armors. Both are wearing “Pyjama” kind of lower pant (so, definitely not a Greek. Greeks were not wearing pyjama kind of dress). Since the right guy is falling down, it means the right party is “under the verge of defeat” (not yet fallen). This falling guy has sent an SOS signal to “India” to save him. So, The question is, should India enter war, in support of the party on its western border? What was the battle, what Indians did, is not clear. This is only a context. There are more interesting information in other details, than the context. Let us see them.

2) On the lowest row, first we see a man sitting and worrying. He is the king (we see the foot rest and arched tree branch (for the symbolic throne). The king is worried because, the assembled people are divided on the final decision and king is not in a position to take sides. King may be supporting the “right group”, but unable to express it. Right, means “group” on right hand side of “Buddha”.

3) Next we see an Indian commander with a short person holding him. The short person may be his son or it is a representation of his subjects (under his protection). Note the hair style of this short man.

3) On the left hand side of Buddha, we see another Indian commander, again with a short person holding him. Note the hair style of this short man. Both short men have different hair styles, indicating, they belong to different regions.

Both commanders are bear chested, as we can see their belly button design. They are commanders, as they are holding weapons and are with expensive jewelary and with a similar head dress (court dress).

4) On the right most edge (lower row), we see an interesting person. He is coming from the battle ground. He is wearing the leather Armour, holding a round shield in left hand and a spear in his right hand . From the flower pattern on his shield, we can identify that, he belongs to the same army as that of the toppled man. He may be a messenger or a prince from the western border of India. He is without a helmet.

But he is having a “Dhothi” on his lower portion. Indian soldiers were not seen with “Leather armory”. They never used leather armory (may be cow was not killed, so no leather). Since he is wearing dhoti, he is a mixed race person, Indian-Iranian or Indian-greek. Looking at his hair style (curly hair), his short sword, he seems to be an Indo-greek man.

5) Second bottom row has even more interesting people. First guy on left is playing a drum. He has a different head dress than the commanders. But the head dress seems to be simple and conical in shape. He seems to be a “commoner” of some other land (Interestingly, he wears a shirt). The shirt indicates he may be from relatively colder land. He does not carry any weapon.

6) The guy next to the drummer, is holding a thick rope. A noose is coiled around his neck. He seems to represent the “Katuka/Professional killer” clan.

7) Next we see a Vanara with a sword. Their hairs can be seen too. No Vanara holds a sword and fights in a war. So, the Vanara here, represent a “mountain tribal”. (The same was interpreted as Vanara army in Ramayana). To indicate, he is from “mountain”, he is depicted as Vanara. Vanaras are understood to be excellent climbers. So, they were represented like that. The sword represents, they are part of infantry.

8) Next we see a person with a coiled serpent in his hand. This guy represents a “Naga tribe person”. He seems to be a person from “Kashmir”.

9) In second row, on left hand of Buddha, we see a person with a book/paper roll in his hand. He seems to represent the nobels or ministers or Brahmin’s or pundits or wise men or the treasurer. It could mean any of them. Basically an adviser to talk on “Dharma” and “Economics” of this war.

10) Next to Pandit or minister, we see a big hound (a dog). This represents, a ferocious animal gang, that was used as part of army.

11) Next we see a Vanara on a horse. Again, Vanara means a “mountain tribal group”. “Vanara with horses”, means, this tribal force are part of cavalry . The horse may also represent a region.

12) Next to horse riding Vanara, we see a person, holding something in his hands. That person may represent , traders or vysya group. He is holding the “wealth” in his hands.

13) Then we see an Elephant. Elephant represent the elephant division, The real strategic power of Indian armed forces at that time.

14) In the top most row, first on right top corner we see a person with “wild boar’s” head, holding a sword. It also represents a ” forest tribal gang”. Wild boars are from plain forests. So, this gang is from plain forest land. Sword represent, they are part of infantry.

15) Next we see a person with a trident. Indian trident always had round bottom. The smooth hairs, hair style, smart looking face and the trident, shows, he is a Roman.

16) Next we see a person with “goat face”. Such goats represents “Arabian tribals”. Arabaian Ibex or tahr goats have such horns.

17) Next on left hand side, we see a wild man with a boulder. He simply represents a wild western tribal (giant), with enough muscle strength (may be an European??).

18) Next we see a person with heavy moustache riding on a camel. The camel points to desert area. Possibly again a middle eastern origin, but from a deep desert region (so camel was shown).

What is interesting is that, a far off dispute has come to “India” for support or for a decision. It looks like, Indian decision would decide the outcome of the war. Everybody (except king) is eagerly looking for a decision from “Buddha”. All parties were surrounding the “Iranian lands”. So, were taking sides and were requested for participation from warring factions. So, they are shown here.

This clearly shows India vs West 2000 years back. The second guy on top left corner, with a boulder in his hands, was the “western” cave man (possibly northern European). He did not even had weapons like “sword” to fight in a war. The guy with camel was the “Arab”, he too had no weapon. While the Indian “Tribals” were superior with their “own” sword. Suppressing this deep history, westerners projected, India as a land of snake charmers and western “white race” as something descended from “heaven”.

What is astounding in this piece of evidence is that, Indians never discriminated anybody based on “race”. Showing “Indian tribal” with a Vanara face is not to “demean them”. It is only to represent their identity with as much “factual data” as possible. Due to Ramayana, Hanuman is shown as a Vanara. But he was “worshiped” too. So, in that Indian society, “Character” was more important than, race (or look and feel). They did not “fudge” a fair European giant with a mythical weapon and Indian tribal with a stone (just because he is dark) to fudge history. See, the roman. He is shown as close to his identity as possible. So, was Arabian on camel. A Vanara or shudra was not “derogatory” in that time. They took it as their true “identity”. Otherwise, there was no need to represent “Roman” as a beautiful young man, while an Indian tribal as “Vanara faced” man. Indian tribal genuinely had “metallurgical knowledge” and were supplying the weapons.

The bottom row contains men from “civilized” world, namely India, Greek and Mesopotamia. As, India was the “major world power” and superior in terms of “philosophy” to decide matters as judicious as possible, The warring factions had come to India, seeking support and advise to resolve their dispute. It clearly shows, who was superior at that time. Huge Indian army, never faced any threat from these barbarians. Indians were not wearing any “Armour” also. They ever felt threat, as barbarians were scared of Indian “reprisal” with large force.

It is a story clearly written on stone. And these cave men, who could only fight with bare hands and boulders, suddenly in 17th century started “interpreting” “Indian religious documents”, ‘Indian science”, “Indian History”, “Philosophy” written at an age, while they could hardly speak to one another with a language. We are forced to read these interpretations. Worse even, we have been engaged in some “education” that is hardly of use to many Indians in their life.

One picture equals 1000 words. It is better, we Indians start believing in our “glorious history”, “intellectual ability” and take up the “Leadership” required for the world today.

Protected: How an Unknown Hindu Yogi Shot Dead a British Captain in Front of British Army in 1857!