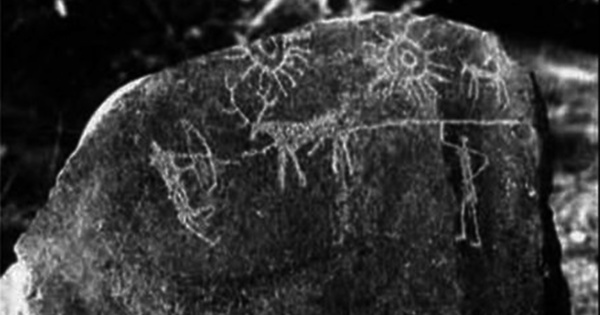 What is a supernova? Have you ever witnessed an astronomical phenomenon in the sky the duration of which may have lasted from few seconds to few weeks or even years? A massive star changes over the course of time. During its last evolutionary stages, it explodes emitting a tremendous amount of light into the universe before meeting its death. This causes the sudden appearance of a ‘new’ bright star, before slowly fading from sight over a certain duration. This phenomenon is called supernova.

The supernova phenomenon one of the most energetic and brightest events in the universe. Till date, scientists have discovered only three naked-eye supernovae in the Milky Way; although they have witnessed several others in distant galaxies through telescopes.

Ancient Indians in Kashmir recorded this phenomenon of the supernova in stone, which dates back to 5000 years. That was the Mahabharata period. Scientists unearthed the old rock at Burzahama in Kashmir. They claim it to be the oldest human record of supernova marked on a stone. The marking shows two bright objects in the sky and a hunting scene.

Though the rock and the markings were spotted by scientists earlier, yet no conclusions about supernova were drawn. Researchers, who dated the rock to be from 2100 BC, thought it to be just an imaginary scene or a picture drawn according to mythologies. They also thought about it to be Moon and Sun. The theory was negated as both the celestial bodies can’t get so close to each other as depicted in the picture. Also, the moon would appear very dim in the presence of the sun.

Coelum Astronomia columnist Massimo tweeted about this with a photograph of the supernova in stone discovered in India: “This 5,000-year old rock art found in India is likely the oldest depiction of a supernova.”: 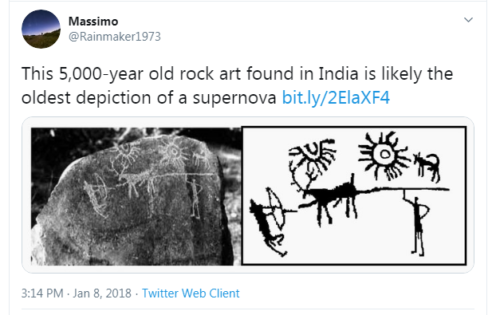 It was Mayank Vahia, a Professor in the Department of Astronomy and Astrophysics at the Tata Institute of Fundamental Research (TIFR) in Mumbai and his colleagues who noticed the importance of the markings. The stone was being reused in the construction of another structure. They guessed it right that it was a supernova.

To justify his findings, Vahia and his team conducted further research. They traced if any supernova occurred between 4100 BC and 2100 BC. They were successful in their search as a supernova HB9 had exploded around 3600 BCE. Going by their research, the stone could have been over five thousand years old. There is every possibility that the rock drawing is the record of the supernova HB9. The partially drawn object is HB9. Vahia and his team are confident about finding more such rock markings in the region.

The team also suggested that it was not a terrestrial hunting scene but a sky-map giving the location of prominent constellations and the Moon on the day the supernova was first observed. According to the study authors, hunters represent Orion, deer represents Taurus, man holding the spear belongs to Pisces and the other animal on the right may be Andromeda and Pegasus.

This proves that ancient Indians were able to identify the supernova nearly 5,000 years ago besides their knowledge about the stars, planets, and how celestial bodies function in the universe.