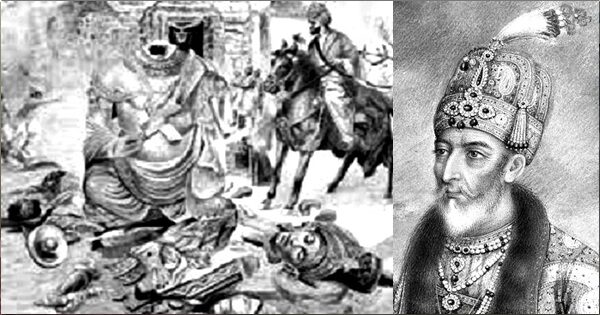 A one-sided and distorted narrative has been part of academic history textbooks since several decades. An NCERT History textbook of Standard XII, titled Themes of Indian History Part II features the following lines in second para of Page 234: “even when temples were destroyed during war, grants were later issued for their repair – as we know from the reigns of Shah Jahan and Aurangzeb.”

Will Durant, an American writer, historian, and philosopher called the Muslim conquest of India “probably the bloodiest story in history”. Mughals have been part of this bloodiest story.  But the atrocities and barbarism of all the Muslim invaders and rulers including Mughals don’t find a place in Indian history textbooks. The TRUTH hasn’t been told. 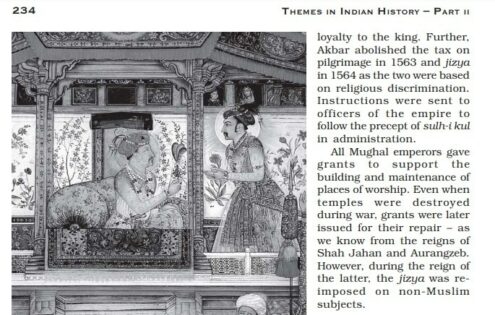 An RTI application dated 03-09-2020 was filed asking the The National Council of Educational Research and Training to provide answers to two questions:

1. Refer to the second Para of page 234 in the textbook Themes of Indian History Part II (Clasls XII), in that regard, please provide the source from which the NCERT concluded that “even when temples were destroyed during war, grants were later issued for their repair-as we know from the reigns of Shah Jahan and Aurangzeb”.

2. Additionally, please provide thc number or temples that were repaired by Aurangzeb and Shah Jahan.

The NCERT replied to this RTI query on both the questions on 18th November 2020 that “The information is not available in the files of the department.” 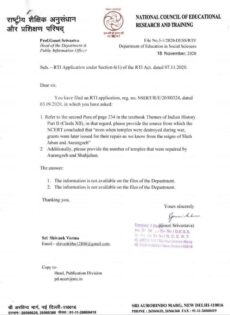 This fake narrative in the NCERT history textbook that Mughals, especially Shah Jahan and Aurangzeb, rebuilt temples they destroyed has sparked outrage online. Audrey Truschke, an associate professor of history at Rutgers University-Newark, in her book on Aurangzeb titled Aurangzeb: The Life and Legacy of India’s Most Controversial King (2017), profusely glorified the Mughal ruler. In an article of hers published in The Scroll, titled ‘What Aurangzeb did to preserve Hindu temples (and protect non-Muslim religious leaders)’, she wrote how Auranzeb protected temples, thus trying to create a fake narrative that the Mughal ruler was tolerant. The distorted narrative that rules the roost in Indian history textbooks finds an equal say in mainstream descriptions.

Each Mughal ruler including Babur, Humayun, Akbar, Jahangir, Shah Jahan, Aurangzeb destroyed thousands of temples. Aurangzeb vandalized the famous Somnath temple, Kashi Vishwanath temple, Trimbakeshwar Shiva temple and many ancient and medieval era shrines in UP, MP and other regions across India. Aurangzeb further ordered that if any temples were reconstructed, they should be demolished again completely so that Hindus could not revive worship at the sites. Hundreds of these temples were later rebuilt by the Hindus over time. No, neither Aurangzeb nor any other Mughal ruler restored or rebuilt any shrine that they destroyed. No they did not offer land grants for reconstruction of temples they destroyed.

The Bija Mandal temple in Vidisha-MP, dedicated to Suryadev, Mahadev, Parvati, and Krishna was one of the grandest and largest temples in India. It is said the temple was nearly a km wide and its height was 105 yards. Had this temple been retained as it is and not destroyed, it would have been like another Angkor vat of Cambodia! This temple was built by Paramara Raja Naravarman. According the book Chronology of India by Vedveer Arya, Naravarman ruled around 5th-6th century CE though other books fix his timeline around 11th to 12th century. This temple was built over the ruins of an already existing temple. 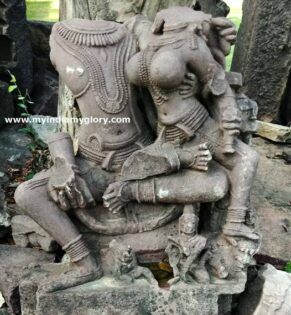 Bija Mandal temple was renovated every time it was destroyed by Islamic plunderers. It was destroyed and looted in succession by Mahmud of Ghazni, Illtutmish, Malik Kafur (Alauddin Khilji’s gay partner), Mahmud Khilji, Bahadur Shah of Gujarat Sultanate, and the last by Aurangzeb. The barbaric Mughal ruler razed to the ground the grand structure and vandalized every part of the temple and the sculptures. Besides, Aurangzeb turned part of the temple into a mosque. This mosque is still there in the premise.

The ancient Trimbakeshwar Jyotirling at Trimbak in Nashik was vandalized by Aurangzeb’s Mughal forces in 1690. During the same time, the Mughals also attacked temples in Ellora, Narsinghpur, Pandharpur, Jejuri and Yavat. This finds description in the book History of Aurangzeb by Jadunath Sarkar, who further quotes from Varshik Itibritta by KN Sane. The Mughals could not completely destroy these sites including the Trimbakeshwar Jyotirling. Their attempts were foiled by a swarm of scorpions, poisonous insects and snakes. There have been a similar incidence of how a swarm of bees attacked Aurangzeb’s forces when they were about to raze the Garbhagriha  of the ancient Neelkanth Shiva temple of Alwar to the ground.

According to the book New History of the Marathas, Volume II by Govind Sakharam Sardesai, the Trimbakeshwar shrine was restored by the Peshwa Balaji Bajirao Bhat, also called Nana Saheb, in November 1754. He commissioned the building of the marvellous shrine out of basalt. This book also mentions about pulling down of a masjid, which was erected by Aurangzeb’s forces after they vandalized the shrine in 1690.

Aurangzeb failed in his first attempt of vandalizing Kashi Vishwanath. He and his Mughal forces first attacked the temple in 1664. The Naga Sadhus resisted and defended the temple. They badly defeated Aurangzeb and his forces. This defeat of the Mughals finds mention in James G. Lochtefeld’s book The Illustrated Encyclopedia of Hinduism, Volume 1. According to this book, the Naga Sadhus of Mahanirvani Akhara of Varanasi offered resistance against Aurangzeb. The book also describes the defeat of the Mughals. The author came across this historical event in a hand written book in the archives of the Mahanirvani Akhara in Varanasi. He described the event as the ‘Battle of Gyan Vapi’ in his book. Description about Naga Sadhus defending Kashi Vishwanath in 1664 also finds mention in Jadu Nath Sarkar’s book A History Of Dasnami Naga Sanyasis. According to Jadu Nath Sarkar, the Naga Sadhus ‘gained great glory. From sunrise to sunset the battle raged and the Dasnamis proved themselves heroes; they preserved the honor of Vishwanath’s seat.”

Aurangzeb attacked Varanasi again after four years, i.e. in 1669, and vandalized the temple. Given the fact that the shrine was ancient and how Hindus were spiritually and emotionally connected to it, the barbaric ruler, to ensure that it wasn’t rebuilt again, built the Gyanvapi Mosque in its place. This mosque still exists in the temple premise. According to local folklore and oral narrations, around 40,000 Naga Sadhus sacrificed their lives, defending Kashi Vishwanath Jyotirling.

The present structure of Kashi Vishwanath Jyotirling temple has been built, rebuilt, and expanded over time. The first initiative was taken by Rani Ahilyabai Holkar. Her father-in-law Malhar Rao Holkar, then Maratha king of Indore, strategized to demolish the Gyanvapi mosque and rebuilt the Kashi Vishwanath Temple in 1742, but his plan failed to materialize. The Nawabs of Lucknow intervened. After eight years, i.e. in 1750, the Maharaja of Jaipur planned another strategy to rebuilt the temple after demolishing the mosque. He decided to buy the land where the entire temple and mosque premise was located. But his plan failed too. Finally, the temple was rebuilt by Ahilyabai Holkar in 1780.

Dozens of books including Anecdotes of Aurangzib and Historical Essays by Jadunath Sarkar describe Aurangzeb’s atrocities on non-Muslims and his destruction of temples. To quote from this book by Sarkar, “Meantime Aurangzib had begun to give free play to his religious bigotry. In April, 1669 he ordered the provincial governors to ‘destroy the temples and schools of the Brahmans… and to utterly put down the teachings and religious practices of the infidels,’….

Extract from ‘Anecdotes of Aurangzib and Historical Essays’ by Jadunath Sarkar

To further quote Sarkar, “The grandest shrine of Mathura, Kesav Rai’s temple, built at a cost of 33 lakhs of rupees by the Bundela Rajah Birsingh Dev, was razed to the ground in January, 1670, and a mosque built on its site. The idols were brought to Agra and buried under the steps of Jahanara’s mosque that they might be constantly trodden on by the Muslims going in to pray. About this time the (new?) temple of Somnath on the south coast of the Kathiawar peninsula was demolished, and the offering of worship there ordered to be stopped. The smaller religious buildings that suffered havoc were beyond count. The Rajput War of 1679-80 was accompanied by the destruction of 175 temples in Mewar alone, including the famous one of Someshwar and three grand ones at Udaipur. On 2nd April, 1679, the jazia or polltax on non-Muslims was revived. The poor people who appealed to the Emperor and blocked a road abjectly crying for its remission, were trampled down by elephants at his order and dispersed.” 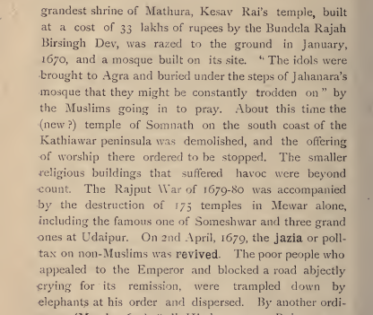 Extract from ‘Anecdotes of Aurangzib and Historical Essays’ by Jadunath Sarkar

The book Aurangzeb by Muni Lal describes several episodes of Aurangzeb’s barbarism and his orders of destruction of temples. To quote from this book by Lal, “Aurangzeb entrusted Prince Azam with the campaign to subjugate Shambuji….En route, the prince carried out the Emperor’s instructions to ‘raze to the ground such strongholds of infidelity (i.e., temples) as cross your way and to build in their place grandiose houses of God (i.e., mosques) such as would do credit to our mission’. In the course of his sweep to Bijapur, Prince Azam demolished eight ancient temples and desecrated many more by sacrificing calves at the sacred altar. At some places, the small armies of the local Raja’s offered resistance, but they could make no impression on the gigantic Mughal force.”

Extract from ‘Aurangzeb’ by Muni Lal

To further quote Muni Lal from the same book, “He razed many a magnificent Hindu temples to the ground, built mosques in their place, desecrated images of Hindu gods and goddesses, banned all forms of music, prohibited the use of Hindu modes of salutation, declared astrology and allied sciences to be atheistic in character, discontinued the tilak ceremonial when Hindu Rajas came to the court to pay tributes…”

Extract from ‘Aurangzeb’ by Muni Lal

Studies in Islamic History and Civilisation by David Ayalon describes how Aurangzeb forcibly converted Hindus to Islam and destroyed Hindu temples. Abraham Eraly, a historian, in his book Emperors of the Peacock Throne: The Saga of the Great Mughals describes how under Aurangzeb, ‘all temples around Ujjain were destroyed’ and of 300 temples being destroyed in Rajasthan. The book also describes destruction of more Hindu temples under Aurangzeb’s campaigns.

Studies and narratives from the last few decades describe Mughals to be tolerant. These fake narratives portray Aurangzeb to have rebuilt temples that he had destroyed. Based on a 2000 study Burjor Avari in his book Islamic Civilization in South Asia: A History of Muslim Power and Presence in the Indian Subcontinent mentions Aurangzeb to have destroyed  only 15 temples! What about the historians during Aurangzeb’s times, who in their historical chronicles described how the Mughal ruler destroyed countless temples across the country!!

Besides the above mentioned literary evidences of Aurangzeb’s temple destruction spree, there are many more sources that prove this Mughal ruler’s intolerance not to mention the atrocities committed by the other Mughal rulers on the Indian population and heritage. The false and one-sided narrative has brainwashed and fooled several generations. It is time truth is told. It is high time Indian history textbooks are rewritten.

1. Islamic Civilization in South Asia: A History of Muslim Power and Presence in the Indian Subcontinent by Burjor Avari.

2. Emperors of the Peacock Throne: The Saga of the Great Mughals, Abraham Eraly.

4. Anecdotes of Aurangzib and Historical Essays by Jadunath Sarkar.

5. A History Of Dasnami Naga Sanyasis by Jadu Nath Sarkar.

7. The Illustrated Encyclopedia of Hinduism, Volume 1 by James G. Lochtefeld.

8.  History of Aurangzeb by Jadunath Sarkar.

9. Chronology of India by Vedveer Arya.