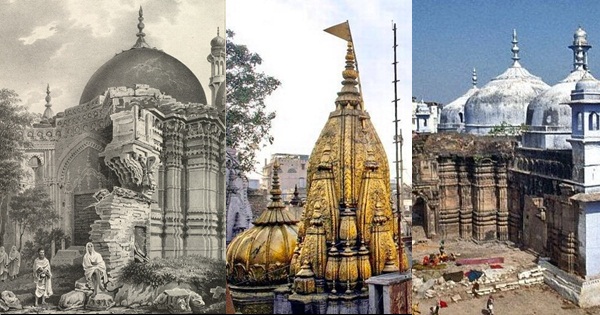 Of late, a series of tweets and posts on social media glorifying the Mughals has been doing the rounds. Swara Bhaskar had tweeted saying ‘Mughals made India rich’ and the same was part of the title of an article by ‘Daily O’. The same magazine in an article by Rana Safvi profusely glorified the Mughals, indirectly meaning they developed and civilized India. Audrey Truschke, Assistant professor of history at Rutgers University-Newark, in her book Aurangzeb: The Life and Legacy of India’s Most Controversial King generously glorified the Mughal ruler. In an article of hers published in The Scroll, titled ‘What Aurangzeb did to preserve Hindu temples (and protect non-Muslim religious leaders)’, she wrote how Aurangzeb protected temples, thus trying to create a fake narrative that the Mughal ruler was tolerant.

India was known as ‘Sone ki Chidiya’. The existing glory and riches of India started declining with Islamic invasion and plunder followed by loot by the British. Despite evidences that prove India was one of the richest countries in the world, a fake narrative that ‘Mughals made India rich’ has been created. Mughals came from Central Asia. Their predecessors looted India several times. One was Timur who looted vast wealth of India and committed mass genocide of Hindus. Part of the land they came from was also ruled by Mahmud of Ghazni, who looted trillions of dollars of India’s wealth. As described by Persian historian Firishta in his book ‘History of the Rise of the Mohammedan Power in India’, translated by John Briggs, with the wealth looted from India, Mahmud turned Ghazna that covered Pakistan, eastern Iran, and parts of Afghanistan, Uzbekistan, into a wealthy empire. Every household was abundantly rich with several slaves (captives taken from India, especially women). Imagine the amount of wealth the Islamic plunderers looted in succession one after another! Mughals were no exception. With the looted wealth they stayed back in India. The list of atrocities, loot and destruction is endless. Even a book in hundreds of Volumes won’t suffice to narrate their tales of barbarism, fanaticism, and cruelty.

Temples were the major treasury for Hindus. Islamic plunderers including Mughals not only looted the wealth of the temples but also destroyed the shrines, broke the idols, desecrated the sculptures and turned many temples into mosques. Was Aurangzeb tolerant as projected in history books and as discussed widely on social media? Well, Aurangzeb destroyed many prominent temples across India including Kashi Vishwanath. As an avid heritage traveler, I have visited hundreds of less explored ancient and medieval era temples across the country. Hundreds of temples were destroyed by Aurangzeb and the desecrated Moortis, sculptures, and ruins speak volume about the religious tolerance of the Mughal ruler. He built mosques in most of the temple premises.

Aurangzeb failed in his first attempt of vandalizing Kashi Vishwanath. He and his Mughal forces first attacked the temple in 1664. The Naga Sadhus resisted and defended the temple. They badly defeated Aurangzeb and his forces. This defeat of the Mughals finds mention in James G. Lochtefeld’s book The Illustrated Encyclopedia of Hinduism, Volume 1. According to this book, the Naga Sadhus of Mahanirvani Akhara of Varanasi offered resistance against Aurangzeb. The book also describes the defeat of the Mughals. The author came across this historical event in a hand written book in the archives of the Mahanirvani Akhara in Varanasi. He described the event as the ‘Battle of Gyan Vapi’ in his book. Description about Naga Sadhus defending Kashi Vishwanath in 1664 also finds mention in Jadu Nath Sarkar’s book A History Of Dasnami Naga Sanyasis. According to Jadu Nath Sarkar, the Naga Sadhus ‘gained great glory. From sunrise to sunset the battle raged and the Dasnamis proved themselves heroes; they preserved the honor of Vishwanath’s seat.”

Yes, Aurangzeb might have or might not have been personally present in that battle but it is 100% true that his Mughal army was badly defeated by the Naga Sadhus in 1664. Aurangzeb attacked Varanasi again after four years, i.e. in 1669, and vandalized the temple. Given the fact that the shrine was ancient and how Hindus were spiritually and emotionally connected to it, the barbaric ruler, to ensure that it wasn’t rebuilt again, built the Gyanvapi Mosque in its place. This mosque still exists in the temple premise. The fact that Aurangzeb himself was present in the 1669 battle and himself participating in the construction of the mosque in the temple premise suggests that he might have been present in 1664 too!

When Aurangzeb attacked Varanasi the second time in 1669, Naga Sadhus must have retaliated till their last breath. Islamic plunderers have always followed tactics of deceit and treachery in warfare and otherwise. According to local folklore and oral narrations, around 40,000 Naga Sadhus sacrificed their lives, defending Kashi Vishwanath Jyotirling.

Kashi dates back to antiquity; the city was founded by Mahadev according to ancient Hindu scriptures. This also finds mention in J. Gordon Melton’s book The Encyclopedia of Religious Phenomena. It is one of the Sapta Puris. This is also the place where the Pandavas visited after the Mahabharata war for Mukti from the sins they had committed. This finds mention in the scriptures; numerous books of this era including Hindu Pilgrimage by Sunita Pant Bansal also describe this.

Kashi Vishwanath Temple is one of the 12 Jyotirlingas. The present structure of the temple is located very near to the original shrine. When was Kashi Vishwanath Temple first built? This temple finds mention in the Puranas including the Skanda Purana, which is one of the 18 Mahapuranas attributed to Rishi Ved Vyas. And Ved Vyas lived during the Mahabharata period. The antiquity of this temple, is thus several thousand years old – at least from the Mahabharata era. Beyond the Puranas, this temple finds mention in various historical written records. Like almost all temples, this temple was also renovated, rebuilt, and expanded over time.

An alternative narrative has also been created that Aurangzeb did not destroy the temple and that the mosque was built in an earlier period. Remnants of the ancient temple are still visible in the Gyanvapi mosque today. Besides, numerous books find mention of the original temple of Mahadev in the mosque premise and destruction by Islamic plunderers including Aurangzeb. These books also describe the existence of the remnants of the ancient temple in the foundation, rear parts of the mosque and the columns. Few books worth mentioning here are Delhi to Kolkata Footprint Focus Guide by Vanessa Betts and Victoria McCulloch, The Illustrated Encyclopedia of Hinduism, Volume 1 by James G. Lochtefeld, Architecture of Mughal India by Catherine B. Asher, to name a few. Reginald Heber, a British traveler who also served as Bishop for few years in Kolkata wrote a book in 1829 titled Narrative of a journey through the upper provinces of India, from Calcutta to Bombay, 1824-1825 where he described how the original structure of the temple, ‘a sacred Hindu spot’ was defiled and turned into a mosque by Aurangzeb. He also described the original shrine was more precious to the Hindus compared the new structure. Edwin Greaves, a Christian missionary, also wrote in his book Kashi the city illustrious, or Benares, 1909 describing thus, “At the back of the mosque and in continuation of it are some broken remains of what was probably the old Bishwanath Temple. It must have been a right noble building ; there is nothing finer, in the way of architecture in the whole city, than this scrap.” No wonder the Christian missionary termed the temple remains as ‘scrap’ but showering praises on the temple architecture. Madhuri Desai’s book Banaras Reconstructed: Architecture and Sacred Space in a Hindu Holy City also mentions that Aurangzeb built the Gyanvapi mosque after destroying a Hindu temple. Gyanvapi means the ‘well of knowledge’; the mosque is named after the well. This well, which was once a part of the ancient Shiva temple, is now a part of the mosque. It is said the water of the well is robotically filled from the Ganga. This water is believed to be as sacred and holy as that of the Ganga. According to the book Good Earth Varanasi City Guide by Eicher Goodearth Limited, when Aurangzeb attacked the temple, the priests hid the ancient Shivalinga in the well to save it from desecration.

Each time our temples were destroyed, they were rebuilt. Kashi Vishwanath Temple was first destroyed by Qutb-ud-din Aibak in 1194 CE. He was then a commander under the army of Mohammad Ghori. The destroyed ruins lay neglected for a few years. Like most other temples, this temple was also rebuilt. The rebuilding was done under the patronage of a Gujarati trader before the mid 13th century. Kashi was plundered again by the the Sharqi rulers of the Jaunpur Sultanate followed by the Muslim army of Sikandar Lodhi in the 15th century. It was rebuilt by Raja Todar Mal in the last part of the 16th century, i.e. in 1585. And then it was destroyed by Aurangzeb.

The present structure of the temple has been built, rebuilt, and expanded over time. The first initiative was taken by Rani Ahilyabai Holkar. Her father-in-law Malhar Rao Holkar, then Maratha king of Indore, strategized to demolish the Gyanvapi mosque and rebuilt the Kashi Vishwanath Temple in 1742, but his plan failed to materialize. The Nawabs of Lucknow intervened. After eight years, i.e. in 1750, the Maharaja of Jaipur planned another strategy to rebuilt the temple after demolishing the mosque. He decided to buy the land where the entire temple and mosque premise was located. But his plan failed too. Finally, the temple was rebuilt by Ahilyabai Holkar in 1780.

Rani Ahilyabai Holker was perhaps the only Indian woman ruler, who built hundreds of temples across India besides renovating and taking up the maintenance of the Char Dhams, Sapta Puris, and numerous ancient and medieval temples and more pilgrimage sites across the country. She also built Dharmashalas and made proper arrangements for devotees visiting pilgrimage sites.

Ahilyabai Holkar constructed the present structure of Kashi Vishwanath Temple adjacent to the Gyanvapi mosque. Had Ahilyabai not constructed the temple then, the entire area would have been encroached as part of the mosque. According to the book Lokmata Ahilyabai by Arvind Javlekar, the Holkars of Indore bore their family and personal expenses from personal funds from their private property and not from public funds. These funds were in the name of Ahilya’s mother-in-law Gautamibai. Ahilya Bai Holker was married to Khanderao Holkar; they were blessed with a son named Male Rao Holker. Khanderao died during the seize of Kumher Fort in 1754. Ahilyabai lost her father-in-law Malhar Rao Holker in 1766. 21 year-old Male Rao Holkar became the ruler of Indore with Ahilyabai as the Queen Regent. Male Rao died within a year. Ahilyabai Holker then became the ruler of Indore and inherited personal funds then amounting to 16 crores. Arvind Javlekar in his book Lokmata Ahilyabai also describes that the Rajmata used all her personal funds for building, re-building, renovating, and maintenance of temples across India after the death of her only son. Part of her personal funds was utilized to build the Kashi Vishwanath temple. She also built several more temples, ghats, and dharamshalas in Kashi.

Baiza Bai, widow of the Maratha ruler Daulat Rao Scindhia of Gwalior, further expanded the Kashi Vishwanath temple followed by more expansion in later years under the patronage of more Hindu rulers and traders. The Raja of Nepal gifted a 7-foot high stone statue of Nandi bull to be installed. While Bhosales of Nagpur donated silver, the 1 tonne gold used for plating the dome of the shrine was donated by Maharaja Ranjit Singh.

Each time our temples were destroyed, Hindus rebuilt them. This was how faith triumphed over fanaticism.

Featured image Courtesy:  (black and white part of temple sketched as Temple of Vishveshvur in 1834 by James Prinsep) from Wikipedia, booksfact.com.