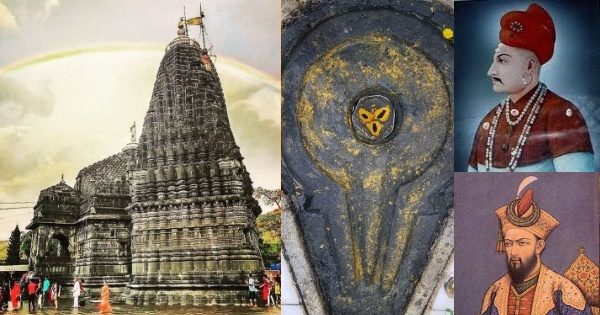 Jyotirlings, where Bhagwan Shiva is worshipped in the form of ‘fiery columns of light’, find description in ancient Hindu scriptures. The existence of the Jyotirling dates back to thousands of years. According to Shiva Purana, Shiva appeared as an infinite pillar of light to settle a debate between Brahma and Vishnu over the supremacy of creation. The jyotirling shrines are places where Shiva appeared as columns of light and symbolize His infinite nature. There are 64 Jyotirlings out of which 12 are considered traditional and the most ancient and sacred; each shrine is a pilgrimage site.

The Shiva Purana, which is one of the eighteen Mahapuranas in Sanskrit, describes the names and locations of the 12 Jyotirlings. These are Somnath in Gir Somnath district (Gujarat), Mallikarjuna in Srisailam (Andhra Pradesh), Mahakaleswar in Ujjain (Madhya Pradesh), Omkareshwar in Khandwa (Madhya Pradesh), Kedarnath in Rudraprayag (Uttarakhand), Bhimashankar (Maharashtra), Vishwanath in Varanasi (Uttar Pradesh), Trimbakeshwar in Nashik (Maharashtra), Baidyanath in Deoghar (Jharkhand), Nageshwara in Dwarka (Gujarat), Ramanathaswamy in Rameswaram (Tamil Nadu), and Grishneshwar in Aurangabad (Maharashtra).

Islamic plunderers and rulers, during a period of 1000 years, destroyed and vandalized thousands of temples across the country. Hundreds of these temples were rebuilt by the Hindus each time they were destroyed. The ancient Trimbakeshwar Jyotirling at Trimbak in Nashik was vandalized by Aurangzeb’s Mughal forces in 1690. During the same time, the Mughals also attacked temples in Ellora, Narsinghpur, Pandharpur, Jejuri and Yavat. This finds description in the book History of Aurangzeb by Jadunath Sarkar, who further quotes from Varshik Itibritta by KN Sane. The Mughals could not completely destroy these sites including the Trimbakeshwar Jyotirling. Their attempts were foiled by a swarm of scorpions, poisonous insects and snakes. There have been a similar incidence of how a swarm of bees attacked Aurangzeb’s forces when they were about to raze the Garbhagriha  of the ancient Neelkanth Shiva temple of Alwar to the ground. To quote Jadunath Sarkar from History of Aurangzeb on the destruction of Trimbakeshwar Jyotirling by Aurangzeb’s forces,

Circa 1690. Instances of Aurangzeb’s temple destruction at Ellora, Trimbakeshwar, Narsinghpur (foiled by snakes, scorpions, and other poisonous insects), Pandharpur, Jejuri (foiled by the deity!), and Yavat (Bhuleshwar) are given by K. N Sane in Varshik Itibritta for Shaka 1838, pp 133-135.

Extract from the book ‘History of Aurangzeb’ by Jadunath Sarkar

Who rebuilt and restored the Trimbakeshwar Jyotirling after its destruction by Aurangzeb? According to the book New History of the Marathas, Volume II by Govind Sakharam Sardesai, the Jyotirling shrine was restored by the Peshwa in November 1754. The Peshwa, the 8th in succession, during this time was Balaji Bajirao Bhat, also called Nana Saheb, who assumed office from 1740 until 1761. He commissioned the building of the marvellous shrine out of basalt. This book also mentions about pulling down of a masjid, which was erected by Aurangzeb’s forces after they vandalized the shrine in 1690.

Extract from the book ‘New History of the Marathas, Volume II’ by Govind Sakharam Sardesai.

The Kusavarta kund, the source of which is the Godavari, located in the temple premises, was built by Shrimant Sardar Raosaheb Parnerkar, the Fadnavis of Indore State. Other sacred bodies of water in the temple site include Amritavarshini, Bilvatheertha, Viswananthirtha and Mukundathirtha.

Trimbakeshwar Jyotirling temple is located between the Brahmagiri, Nilagiri and Kalagiri hills. The Jyotirling here has three faces embodying Brahma, Vishnu, and Shiva. Vigrahas of a pantheon of more deities adorn the temple. A jeweled crown studded with diamonds, emeralds, and other precious stones, believed to be from the Mahabharata period, is placed over the gold mask of the deity. This crown isn’t displayed often.

Trimbakeshwar Jyotirling deity was once adorned by the Nassak Diamond. During the Anglo-Maratha war, the British looted the precious jewel. Currently, this diamond is with Edward J. Hand, a trucking firm executive from Greenwich, Connecticut, USA.

At the Trimbakeshwar Jyotirling, the Hindu genealogy registers are kept. Trimbak is also the place where many thousands of years ago Maharishi Gautama lived and performed penance. He had his ashram here. It was at the hills here that the Rishi performed penance, invoking Shiva for Ganga to flow so that he could take a bath to wash away his sins of harming a cow. Shiva performed Tandav Nritya on the peak of Brahmagiri hill as a result of which Ganga, later known as Godavari, appeared.

Why did Aurangzeb follow an aggressive attitude towards Hindus? Why did he order destruction of temples temples? To quote from the book Aurangzeb and His Times by Zahiruddin Faruki, “Before discussing the puritanic activities of Aurangzeb and his endeavour to follow the Laws of Islam it would be appropriate to briefly examine the principles of Islam, especially such of them as affect the rights of non-Muslims in Muslim state. The critics of Islam, ignoring the circumstances under which the Prophet lived and published his religion, and being fond of looking at things through the wrong end of the telescope, have presented a repulsive picture of the Muslim faith. According to their theory, a Musalman is like a maniac kept under control; he is constantly struggling to free himself in order to rush out with the sword in one hand and the Quran in the other to demand the recitation of the Islamic formula from every infidel in the street. He is supposed to be ever ready to pull down the temple or the church in a paroxysm of rage, if his demand is refused. When, however, his life-purpose is accomplished, he pauses for effect and then prepares himself to march straight to heaven. Such are supposed to be the characteristics of a Musalman; and anyone who endeavours to follow the laws of Islam has to pursue a mad career. As Aurangzeb attempted to follow the Islamic law, it is contended that he was bound to adopt an extremely aggressive attitude.” 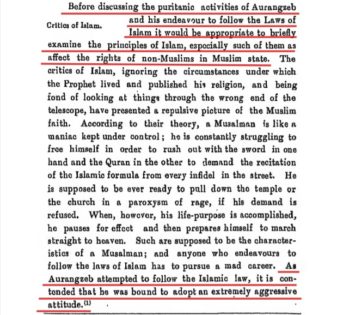 Extract from the book ‘Aurangzeb and His Times’ by Zahiruddin Faruki

Muni Lal in the book Aurangzeb (first published in 1923 by Vikas Publishing House Pvt Ltd) points out many good points pertaining to Aurangzeb, also pointing out how he imprisoned his father Shah Jahan and killed his own three brothers Dara Shikoh, Shuja and Murad for the throne. He then questions why he desecrated temples, imposed hardships on non-believers and involved in more brutal acts. To quote from this book, “How come then that such a man as this razed history-crusted temples to the ground, desecrated places of worship, trampled underfood the susceptibilities of millions of his peace loving subjects, cut to pieces all those who seemed to oppose either his religious or political will, threw his own sons and daughters in prison at the slightest evidence of disloyalty, imposed extreme economic and social hardships on all those whom he classified as non-believers, and did many an unIslamic act in the name of Islam?”. Like scores of historians, Muni Lal also points out the atrocities committed by Aurangzeb and on temples destroyed by him.

Extract from the book ‘ Aurangzeb’ by Muni Lal.

Like scores of historians, Muni Lal also points out the atrocities committed by Aurangzeb and on temples destroyed by him. But the narrative is now reversed. Audrey Truschke in her book on Aurangzeb profusely glorified the Mughal ruler. In an article of hers published in The Scroll, titled ‘What Aurangzeb did to preserve Hindu temples (and protect non-Muslim religious leaders)’, she wrote how Aurangzeb protected temples, thus trying to create a fake narrative that the Mughal ruler was tolerant.  Aurangzeb further ordered that if any temples were reconstructed, they should be demolished again completely so that Hindus could not revive worship at the sites.

To further quote Muni Lal from his book Aurangzeb on the Mughal ruler, “He was an iconoclast, a monarch who deluded himself into the conviction that the way to heaven could not but be littered with fragments of idols removed from their pedestals in ancient temples.”

“He razed many a magnificent Hindu temples to the ground, built mosques in their place, desecrated images of Hindu gods and goddesses, banned all forms of music, prohibited the use of Hindu modes of salutation, declared astrology and allied sciences to be atheistic in character, discontinued the tilak ceremonial when Hindu Rajas came to the court to pay tributes…”

Extracts from the book ‘ Aurangzeb’ by Muni Lal.

Not only modern historians but also mainstream narratives including textbooks portray Aurangzeb as tolerant. Why do these narratives hide many facts about the Mughal ruler, especially destruction of thousands of temples by his orders not to mention the atrocities he committed on non-Muslims.

The story of Trimbakeshwar Jyotirling and every temple destroyed and rebuilt should be told. It is time, history, as it is, is portrayed. A spade should be called a spade! False glorification should stop.