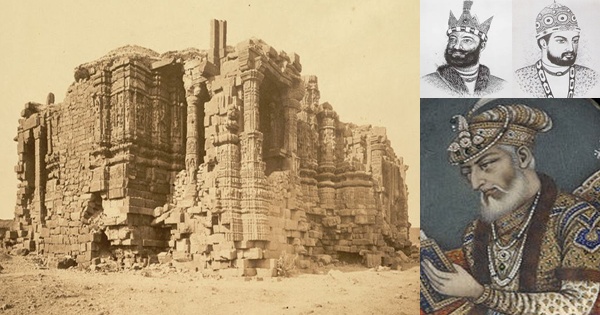 Somnath temple! The first among the 12 jyotirling shrines of Lord Shiv. Located in Prabhaskshetra near Veraval in Saurashtra region on the western coast of Gujarat. Prabhaskshetra is the place where Krishn and Balaram went on a task related to offering of gurudakshina to their Guru Sandipani. A four hours journey from here and you shall reach the ancient kingdom of Dwarka, established by Krishn. A region that carries the legacy of India’s rich cultural and historical heritage!

Ancient Hindu scriptures find mention of Somnath temple as a pilgrimage site. The convergence of three rivers – Kapila, Hiran and Saraswati deem it as Triveni sangam. According to Puranic history, Som, the moon god bathed in the Saraswati river to regain his lustre, which he had lost to a curse. It is one of the places where Lord Shiv is believed to have appeared as a fiery column of light.

Do you know Somnath temple, which was renowned worldwide for holding great treasury was looted and plundered several times? And each time, it was reconstructed just to be more splendid than the previous one. It started with Mahmud of Ghazni followed by Alauddin Khilji and Aurangzeb. Even the Portugese left no stone unturned to see it in ruins.

There are no historical references as to who built the first shrine. Its mention in scriptures suggests its construction many years before the Christian era. One of the first few rulers involved in construction of Somnath temple was a Yadava king of Vallabhipura of coastal Gujarat around 649 CE. Nagabhata II, a Gurjar Pratihar king, was on a pilgrimage to this site during his reign in 815 CE. He found the temple almost razed to the grounds. The temple was looted, plundered, and razed to the ground by Al-Junayd, the Arab governor of Sindh as part of his invasions of Gujarat and Rajasthan. Nagabhata II reconstructed the temple using red sandstone.

Other kings involved in reconstruction of the temple after repeat plundering were Chaulukya kings Mularaja, Bhima I,  and Kumarapala. According to an 1169 inscription, Kumarapala rebuilt it in ‘excellent stone and studded it with jewels’. Paramara King Bhoj of Malwa, Mahipala I, the Chudasama king of Saurashtra and his son Khengara again reconstructed it after it was plundered by invaders.

India was known to be the richest country in the world. Temples were then not just places of worship, but also were treasuries. Pilgrims including kings from far away places donated wealth including gold and precious jewels excessively to the Somnath temple.  Do you know out of the numerous loot, destruction, and plundering of the Somnath temple, the worst were committed by Sultan Mahmud of Ghazni, Allauddin Khilji, and Aurangzeb?

By Mahmud of Ghazni

During the period between 1000 and 1027 AD, Sultan Mahmud attacked India 17 times. Two key objectives behind his attack was to spread Islam and to accumulate the country’s vast wealth. During his campaign, he razed hundreds of temples to the ground and looted the treasury. He killed thousands of Hindus, sparing only those who converted to Islam.

Sultan Mahmud attacked Gujarat in 1025 during the reign of Bhima I. The king and his army made a stiff resistance, but in vain. He plundered the Somnath temple and looted all the riches. The booty was worth 20 million dinars, more that all of the wealth the Sultan accumulated during his first loot of India! He then razed the temple to the ground and himself broke the jyotirling into pieces. He massacred all the worshippers and defenders. He then set the temple site on fire. He carted the stone fragments of the lingam to Ghazni and used them to built steps of the city’s mosque. The temple had sandalwood gates; he carried the gates to Afghanistan.

Allauddin Khilji commissioned Ulugh Khan in 1299 for invasion of Gujarat. Vaghela king Karna was then the ruler of Gujarat; Khilji’s army defeated him and sacked the Somnath temple. Khilji had ordered massacre of Hindus and looting of wealth from the temples his army plundered. Hasan Nizami, a Persian poet and historian, who lived in the 12th and 13th centuries wrote in his book Taj-ul-Ma’sir, the first official history of the Delhi Sultanate about Alauddin Khilji boasting about the plunder of Somnath that “fifty thousand infidels were dispatched to hell by the sword” and “more than twenty thousand slaves, and cattle beyond all calculation fell into the hands of the victors”.

While Khilji’s army was returning to Delhi with the Somnath temple booty, Shivling, and Hindu prisoners, Jalore Rajput prince Biram Dev attacked them. They defeated Ulugh Khan and snatched the booty along with the Shivling. They freed the Hindu prisoners.

Khilji’s illegitimate daughter Firoza had fallen in love with Biram Dev after she saw him wrestle in a wrestling match. The Sultan asked for Biram Dev’s hand in marriage with his daughter at the same time pointing out that he should convert to Islam. Biram Dev denounced Khilji’s marriage proposal. This was followed by his attack of Khilji’s army and snatching of the booty and Shivling. An angry Khilji sent a huge army to Jalore. The battle continued for 2 long years without fail. Biram Dev and his father Kanhadadev breathed their last in the battle, defending Jalore. Many Rajput women performed jauhar, to save themselves from disgrace at the hands of the enemy. Khilji’s army ransacked the entire fort of Jalore, killed all Hindus and razed temples to the ground. He searched for the Somnath Temple booty and the Shivling, but could not locate them. Later, Khilji converted the ruined fort into a Muslim monument.

Aurangzeb, during his reign, had ordered destruction of temples at various places across his dominion. Though Somnath temple was razed to the ground several times and its wealth looted by plunderers and invaders, successive rulers erected the temple to its lost glory and riches. Aurangzeb further ordered that if any temples including the Somnath were reconstructed, they should be demolished again completely so that Hindus could not revive worship at the sites.

According to SH Desai’s book Prabhas and Somnath, following Aurangzeb’s order, local Muslims of Prabhas along with few of Aurangzeb’s army vandalized the Somnath temple. They were about to raze the temple to the ground when Hindus in large numbers rushed to the spot. A Muslim official slaughtered a cow in response besides killing two of the temple priests. A clash ensued between the two parties. As the Hindus outnumbered, Aurangzeb’s men left the site. Later, they only returned with a bigger army and succeeded in destroying the temple and looting the treasury.

The present standing edifice was the result of the efforts of Sardar Vallabhbhai Patel, who was instrumental in reviving and reconstructing the splendor of the original site. It was designed by temple architect Prabhaschandar. K. M. Munshi, who was then head of the temple trust, termed Somnath temple as the ‘eternal shrine’ in his book on the temple’s history. Dr. Rajendra Prasad installed the jyotirling in the new temple on May 11, 1951. Do you know Jawaharlal Nehru objected allotment of funds for reconstruction of the temple. Nehru even went to the extent of dissuading Rajendra Prasad in presiding over the installation ceremony of the shrine. The temple is presently under the maintenance of Shree Somnath Trust.