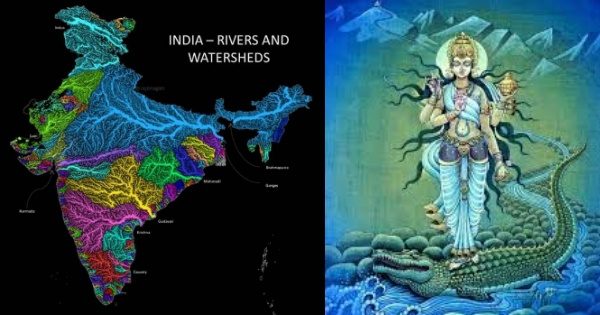 Rivers!! They are the veins, arteries and capillaries of Bharatiya Dharmic civilization, even before the nation India is formed!!

They are the bloodlines that shaped Bharatavarsha and enabled the ancient Rshis like Marichi, Atri, Bhrgu, Angiras, Pulaha, Pulastya and Kratu to discover the cosmic system of living viz. the Sanatana Dharma.  This discovery passed on through Vasistha, Agastya, Bhardwaja, Gautama, Parasara, Vyasa and Valmiki to reach us through their works called the Mahabharata, Ramayana and the Puranas.

Ganga with Yamuna forms the largest river network of Bharata as seen in the map with light blue color.  The Ikshwakus at Sarayu central to Ramayana and the Bharatas at Ganga-Yamuna central to the Mahabharata – both are from the Ganga river network. This network contains almost 70% of all the main kingdoms mentioned in the Mahabharata and Ramayana like Kuru, Panchala, Kashi, Kosala, Videha, Malla, Magadha, Anga, Vanga, Pundra, Suhma, Lauhiti, Dasarna, Chedi, Karusha, Matsya, Kunti, Avanti and many more.

In yellow color to its south we then have the 2nd largest river network of Godavari and the 3rd largest Krishnaveni sustaining the Vanaras at Kishkindha and Rakshasas at Janasthana described in the Ramayana. It watered the Dandakaranya surrounding it on all the sides and Vidarbha to its north west. 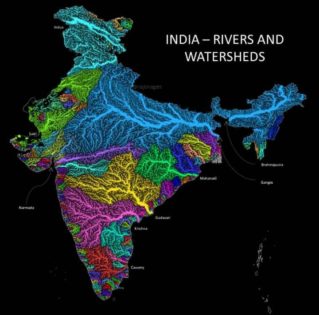 To its south are numerous rivers, with Penneru, Swarnamukhi and Palar rivers among them, watering the Dravida desha.

To the south is Kaveri shown in red – the cradle of Chola, Pandya, Chera culture with its Itihasas Silappatikaram and Manimekalai. To its south is Vaigai the lifeline river of the Pandyas.

Small rivers of Kerala like Pampa, Periyar, Nila defines its culture with a micro diversity second only to Bharatavarsha.

To its north up to Narmada are similar western flowing small rivers watering the Gomantaka,  Konkana, Malavana lands.

To the eastern shore in green is Mahanadi and to the north of it Suvarnarekha and Vaitarani defining the Kalinga Desha. To its north east is Brahmaputra known as Lauhitya in the Itihasa Puranas which the Indo-Gangatic Nagas and other tribes adopted as their home land.

To the west shown in Green is the domain of Sarasvati which gave us the four Vedas. Sarasvati, though lost today, is survived by its tributaries and its sweet water underground which still nourishes the people in the desert. Close to its mouth lied Dwaraka, Prabhasa, Kaccha and Anarta deshas.

Sindhu (with its 5 tributaries) in the north and west, Sarasvati at the center, Yamuna with Ganga in the east and Narmada in the south defines the largest and the oldest civilization known by the names of IVC, SSC or Harappan, which is but same as the Veda, Itihasa, Puranic civilization.

I have studied around 150 rivers mentioned in the Mahabharata, Ramayana and Veda Puranas and tabularized them in my site AncientVoice. Rivers formed the natural boundaries of most of the kingdoms. 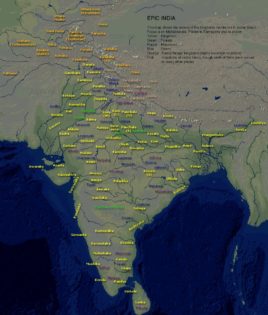 Ayodhya city, the capital of Kosala was on the bank of Sarayu river. While going for the forest life, Rama mentions the Syandika river as the southern boundary of Kosala after which it was the territory of Nishada ruler Guha who had Sringiverapura (now Singrur near Prayaga) as his capital.  Sarayu Ganga confluence is also mentioned as the easternmost boundary of Kosala after which the domains of Tataka begins. Rama goes there and close to the Shone (Sone) river kills Tataka and protects Siddasrama, the hermitage of Vishvamitra close to the banks of Shone river which serves as the western boundary of the Magadha kingdom. To the north, Magadha is bounded by Ganga. To the north of Ganga was Anga kingdom ruled by Dasaratha’s friend Lomapada and the places like Vaishala.

Between Gandaki and Kaushski in southern the foothills of Himalayas was Videha kingdom, the native kingdom of Sita and her father Janaka.

The northern boundary of Kalinga was marked by the Vaitarani river.

Whatever geography we are now teaching our kids have no connection to our Dharma Samskrti.  Geography of Bharata is connected only with the Veda, Itihasa, Puranas – the literature of Sanatana Dharma Samskrti. The geography of the Abrahamic religious books are but connected with Arabia, Israel and Egypt, all alien to Bharatavarsha.

Indian geography must be taught in the schools with this Veda Itihasa Puranic context.

2. Research Paper on the Geographic Data in the Mahabharata – Jijith Nadumuri Ravi

Geography of Ancient Bharat and the Significance of Rivers and Mantras