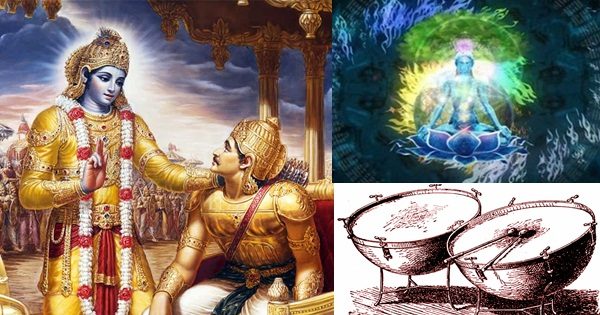 While trying to get through the lengthy lofty words of the Bhagavad Gita, did you ever think why are the words so long? It would have been so much more easier if the words were split apart? It seemed to be spinning with so much of unfamiliarity embedded.

Well, in the world of chanting, the words of a line are delivered in rapid succession. There are no breaks between words. This causes a welding transformation in the joints. The primary cause of Sandhi is fluidity and ease in the mouth. The work of Sandhi is a natural vocal effect than strict rule of Grammar.

Hop along and discover some of the Sandhi elements in the Bhagavad Gita.

Effects and Filters with Sandhi

Think of Sanskrit sounds as Elements of Periodic table and Sandhi like an alchemy at the joint. Element A welds with element B. Depending on the family and type of each element, there is a compromise and adjustment needed.

1. Like the war footings a replacement of a ruling sound with another sound (*)

2. An additional sound friend joins in on top of the exisitng sounds (+)

Let us see these effects further on.

And there are are 3 possibilities in Sandhi:

Let us organize this into sets, starting from simple vowels to more complex and long ones. This will really make the understanding quite simple.

Let us start with the easiest swara sandhi. This involves sandhi of 2 vowels sounds belonging to the same family (sa-varna). This results in a longer form of that vowel (dheergha) as shown in set 6[ आ ई ऊ ॠ ॡ )].

Having seen alchemy with same family, Let us watch alchemy of ‘अ’ with other vowels.

Among the letters, I am the first letter a”.

Interestingly, this is the alchemy between basic vowels and अ and results in semi vowels.

Previously, we have seen alchemy of basic vowels with ‘अ’. Now we shall see alchemy of next set of vowels [ए ओ ] with अ. Interestingly, the guna vowel is retained as it is but the अ is dropped. Hence it is called Poorva Rupa.

In Bhagavad Gita, there are a lot of opposite words beginning with अ. This Sandhi can be used as a clue to figure out its presence. The ऽ symbol conveniently denotes this sandhi.

Like in the name Yantha Vantha, A Ya or Va sound is introduced in this Sandhi. And the vowel of the second word beginning is retained. Sounds confusing? Let us see a few examples:

Alchemy with म्‌ and न्

Let us start with the simple Padaccheda involving the popular म्‌ ending and Vowel beginning. There are absolutely no additional effects but the presence of म्‌ gives hint about breakage.

Krishna rebukes Arjuna with a string of provoking attributes.. This act of yours so not noble and unworthy:

Consonant Sandhis is something to ponder about. They are like embellishments and adornments in a chain of the otherwise familiar words. We will look into it with a poetic and appreciation sort of outlook and not with the usual rigour.

Let us just observe these very familiar words. The patterns keep repeating and the best way of learning is to latch on to these phrases and the effects like musical gamakas. The effects range from softening, doubling and sliding up.

In Chapter 1 of Bhagavad Gita, there is a wonderful description of the loud resounding trumpets and conches announcing the war protocol, the ghoshna announcement.

That uproar tore the hearts of the sons of Dhritharashtra.

Let us check out in the lab of our mouths.. What is the difference between क, ख vs ग, घ? The former set seems focussed, sharp and the later seems more deep and announced. The unvoiced aghoshit and the voiced ghoshit. The voiced sounds seem to be a bit spread out due to the additional tuft of voiced air.

Let us check out the architecture and design of the consonant sounds. It is pretty much like periodic table. The various vargas or rows indicate the placement in the mouth. The thermal sounds श ष स ह and semivowel sounds य र ल व can also be seen as part of the vargas. Test it out in the laboratory of your mouth.

In the vertical arrangement, they are divided into 2 sets of unvoiced, 2 sets of voiced and one set of nasal sounds. Take some time understanding this picture.

Let us change the pitch of the Consonant Sandhi. Every sound has a kula gotra of its position and voice. When sound A approaches sound B, depending on the differences in varga and voice, the sounds A & B have to make adjustments for a smooth union. This is by far the most important paradigm of Consonant Sandhi.

“I always say to my students that there is a great lesson for living a harmonious and joyful life from the rules of sandhi. A hard unvoiced can never interact with a soft voiced. There will be choppy interruption and feeling of uneasy.

What’s the way out? Compromise, sacrifice; When one compromises to be one with the other, there is a happy blending and rhythmic flow. That’s the secret of a joyful life. It turns the ordinary life into a life of music and melody.”

With the above understanding, let us explore a few unions:

After seeing the architecture of Sandhi, it makes me feel

“Sandhi is liquid Architecture of Sounds”

Let us start with the small words यत् and तत्. Bhagavad Gita is full of small connector words and understanding the alchemy with one of them gives great confidence over the underlying transformation.

The sound त् is a clear unvoiced sound involving dental touch. When it unites with some of the other unvoiced notes, it is an easy union. There is no compromise needed and hence no additional effect.

** In the alchemy of 2 unvoiced sounds, generally there is no effect..

We saw that the union of त् + [unvoiced क, त, प, स] had no compromise as they were distantly placed. However, the च varga is very close to the त varga and compromise is needed. From dental position, tongue has to be rolled back to the palatal taalavya position.. To help this, the starting sound morphs to the palatal sound. A beautiful doubling pattern is produced..

Every chapter ending has this verse. What can we infer from the ‘द’ sounds? Inorder to meet the Voiced sounds, Unvoiced त has been upgraded to Voiced द of it’s family.. A small compromise is made for the smooth transition.

Similarly, when it interacts with a vowel or semi vowel which are voiced, the unvoiced sound is upgraded to its voiced counterpart in its varga

** When Unvoiced meets Voiced consonant or vowel, it is ugraded to its Voiced form.

A very interesting chemistry between त् &श. While त् is a simple dental unvoiced sound, The thermal sound श is a palatal shearing thermal sound with more contact than च. . Hence we get intermediate च्छwhile combining त् + श. Try it out.

A frequent combination is sandhi of न् with the connector च

Let us take a few examples outside Bhagavad Gita to register these patterns. When there are 2 nasal sounds clustered, there is a hint about this combination:

In chapter 8 of the Bhagavad Gita, Krishna defines Karma as the creative force Visarga that creates the material states.

In the world of Words, may be we can imagine each word is a bubble that is blown off with a visarga expulsion. And when there is a context suffix or a Sandhi, the visarga is dropped and there is a seamless blending.

Let us observe some familiar phrases.

During Sandhi with Visarga, the ह expulsion should gradually merge with the following sound. Let us remind ourselves about the other thermal sounds श ष स that is close to ह . Therefore union of visarga with a unvoiced च छ, ट ठ and त थ results in श ष स respectively.

Drop of Visarga or Lopa

Well, with just a few illustrations, it might be seeming too much alchemy syntax. Was there a way to visualise the effects of Sandhi? Was there a neat presentation? Is there a better architecture to represent the elements?

It feels like Maharshi Panini has taken the standard vowel and consonant table and reorganised it into sets to visualise the output of the alchemy. There may be a million other reasons for the reorganisation, but with my current understanding, it is very evident in the sandhi syntax. Ignore the Blue markers as they act as delimiters or markers for the sets. 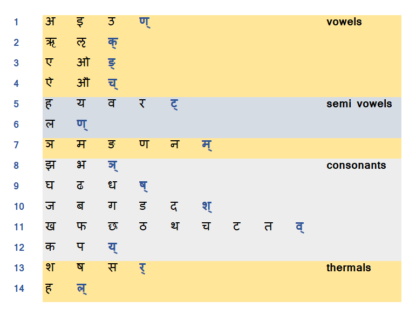 In the Vowel Sandhis, we looked into organic groups based on vowel complexity. These correspond to the first few sets in Panini’s distribution.

How to go about breaking Sandhis?

After going through the sandhi for few chapters, one gets familiarity with the small connector words, vocabulary and intuition into the sandhi operations. From then try doing the sandhi yourself. It will help.

Sujatha Ratnala is an engineer by profession. Based in California, she writes on Mathematics, Technology, Linguistics, Yoga. She is author of ‘Samskruthe Yogashala-Yoga Class in Sanskrit'.

Data Science with Bhagawat Gita: For Building Intuition in Understanding