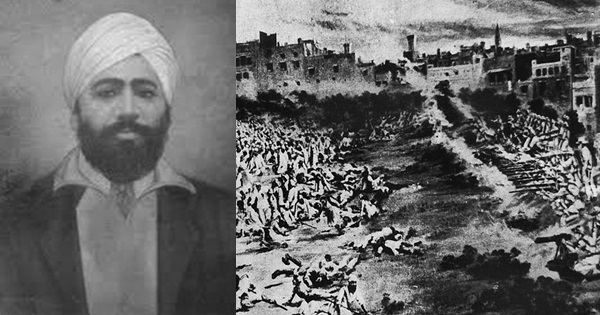 It is unfortunate and a pity that many Indians themselves including politicians today are playing politics on Udham Singh’s assassination of Michael O’ Dwyer, questioning his act. So they are creating a controversy that Udham Singh killed Michael O’Dwyer mistaking him to be General Dyer. When will Indians wake up from their colonial mindset and judging events and incidents from a colonial point of view? Both Lt Governor of Punjab Michael O’ Dwyer and General Dyer were equally responsible for the Jallianwallah Bagh massacre! Only a brave son of Bharat Mata could do such an act, risking his life for the country!! This politics of controversy should stop. The freedom we enjoy today are all because of the sacrifices of lakhs of such sons and daughters of Bharat Mata!

Udham Singh was born as Sher Singh on 26 December 1899 at Sunam village located in the Sangrur district of Punjab. His father Sardar Tehal Singh was a watchman at a railway crossing in the village of Upalli in the same district. Udham Singh lost both his parents by the time he was aged nearly four years. He and his brother were then brought up under the care of Central Khalsa Orphanage in Amritsar. Here he was renamed Udham Singh after being initiated in Sikh rites. The orphanage took care of his education.

The young Udham Singh had been witness to the atrocities of British on the Indians. It was 13 April 1919 when he along with his friends from the Central Khalsa Orphanage were serving water to a crowd of nearly twenty thousand unarmed peaceful protestors at Jallianwala Bagh, Amritsar. The protest was led against the arrest of a number of local leaders from Amritsar.  The leaders were arrested on 10 April 1919 under the Rowlatt Act, a legislative act passed by British that involved ‘indefinite detention, incarceration without trial and judicial review’ of revolutionaries to check their activities. The crowd gathered for another purpose too – to celebrate Baisakhi festival. Jallianwala Bagh, surrounded by 10 feet walls on all sides with five narrow entrances and one wide entrance, was an open area of six to seven acres. Suddenly, without any warnings, there were rifle firings from the front of the narrow exits. General Dyer had blocked the main exits. He repeatedly ordered his troops to fire at the crowd, targeting the densest. Udham Singh, who survived the massacre, was witness to this barbaric incident. Hundreds attained martyrdom in front of his eyes and thousands injured. As described in the book The Butcher of Amritsar  in page 253 authored by Collet, General Dyer stated this act ‘was not to disperse the meeting but to punish the Indians for disobedience’.

Udham Singh took a vow to kill General Dyer. He became a follower of Bhagat Singh. He left his orphanage after the Jallianwallah Bagh massacre to actively participate in India’s freedom struggle. He had cleared his matriculation exam a year ago then. Meanwhile, he continued his studies. He joined the Ghadar Party overseas in 1924. According to the book Saffron Swords by Manoshi Sinha, the Ghadar Party was formed on 12 April 1913 by Indian workers in the Pacific Coast including Canada, USA that majorly comprised of Sikhs. Sohan Singh Bhakna was the key founder. Another founding member was Har Dyal. The objective behind its establishment was securing India’s independence from British rule. Its headquarters was at San Francisco.

Ghadar Party had started publishing a weekly paper called The Ghadar published under the auspices of the Yugantar Ashram in San Francisco. This paper carried the caption on the masthead: Angrezi Raj Ka Dushman: “Today there begins ‘Ghadar’ in foreign lands, but in our country’s tongue, a war against the British Raj.

What is our name?

What is our work?

Where will be the Revolution?

The time will soon come when rifles and blood will take the place of pens and ink.”

In 1929, Udham Singh returned to India with revolvers and ammunition intended to kill British, but was caught and imprisoned for 5 years. After his release from jail in 1931, he was spied by the British. He somehow escaped to Germany via Kashmir. He started working in London from 1934.

Udham Singh received news about Michael O’Dwyer who was to deliver a speech on 13 March 1940 at Caxton Hall, London. He was waiting for this opportunity! Udham Singh took a revolver to the Hall, concealing it inside his jacket pocket. He had bought it earlier. As O’Dwyer moved towards platform where he was to deliver his lecture, Udham Singh shot at him right at his heart. O’Dwyer died on the spot.

For this action Udham Singh was arrested, tried and and remanded in custody at Brixton Prison. The book The Murders of the Black Museum: 1870-1970 quotes Udham Singh in court justifying the assassination thus:

“I did it because I had a grudge against him. He deserved it. I don’t belong to society or anything else. I don’t care. I don’t mind dying. What is the use of waiting until you get old? … Is Zetland dead? He ought to be. I put two into him? I bought the revolver from a soldier in a public house. My parents died when I was three or four. … Only one dead? I thought I could get more.”

“I did it because I had a grudge against him. He deserved it. He was the real culprit. He wanted to crush the spirit of my people, so I have crushed him. For full 21 years, I have been trying to seek vengeance. I am happy that I have done the job. I am not scared of death. I am dying for my country. I have seen my people starving in India under the British rule. I have protested against this, it was my duty. What greater honour could be bestowed on me than death for the sake of my motherland?”

There were mixed reactions from the Indian political leadership fraternity, especially the believers of non-violence, on Udham Singh’s assassination of Michael O’ Dwyer. Even Mohandas Gandhi had termed it as ‘an act of insanity’. Today, the reactions remain. Not about whether it was right of him of committing the act. Today the controversy surrounds around, ‘Udham Singh mistook Dwyer to be Dyer’, that ‘He did not assassinate the real culprit of the Jallianwallah Bagh massacre’. As aforementioned in the first paragraph, both Dwyer and Dyer were equally responsible for the act, though Dyer was more answerable.

There has been news about family of Udham Singh living in utter poverty and about his grandson Jagga Singh doing odd menial jobs, mainly as a daily laborer for a living. In an article published in openthemagazine.com, the same controversy of the ‘Dwyer and Dyer’ theory continues.  As per the article, “Today, so many years after the event, Udham Singh’s descendant Jagga Singh does little to nix the mix-up theory. Speaking of it, he mixes the two names up repeatedly.”

To quote the same article from openthemagazine.com, “Jagga and his immediate family have had such a hard life that he never understood the importance of Udham Singh until recently. Descendants of Aas Kaur, Udham Singh’s sister (Udham Singh was never married and did not have any children), once owned farmland, he says, but over the years, the land was gradually sold for sustenance. By the time his father Jeet Singh came of working age, he had no alternative but to work as a construction labourer, earning until recently a daily wage of about Rs 120. His elder brother supplements the family income by painting homes. Jagga, who quit education after completing Class 10, found employment in a small cloth establishment. They lived in a rented tenement of a single room until recently, steeped in debt.”

More research is required to prove whether Jagga Singh is truly the grandson of Udham Singh. But if it is true, it will be a shame for the country and an insult to the freedom fighter who died for the motherland.