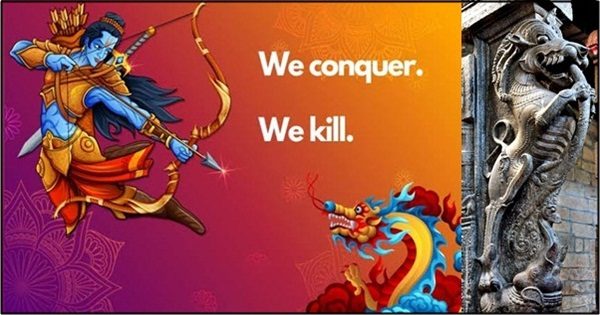 There was a recent controversy about a picture depicting Rama slaying the dragon,  giving it a context of the recent India-China stand off. While many considered this as inappropriate, few considered another Deva in place of Shri Ram.  This motif was featured by Taiwan News titled ‘Photo of the Day: India’s Rama takes on China’s dragon’. The official twitter handle of Taiwan News garnered 22,000 plus retweets in no time on this post. 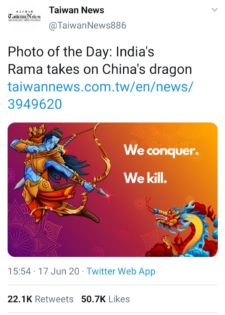 There are multiple aspects of it that I want to discuss.

Firstly dragons are not alien to our culture.

The dragon myth of China can be traced back to our traditions about Garuda and his enemies viz the Nagas. Garuda,  Aruna,  Sampati,  Jatayu and others are Suparnas diversified into numerous Suparna kings. The Naga kings are mentioned as 1000 in numbers like Ananta,  Vasuki,  Takshaka, Airavata,  Karkotaka,  Kaliya and others.

Due to the magical narratives in the Veda Itihasa Puranas we tend to think them as mythical birds and snakes.  But the tribal names like Airavata,  Takshaka,  Kaliya, Karkotaka and Suparna do exist in our ancient history.

The historical Karkotakas conquered the Xinjiang province of China.

Xinjiang falls in one of the 7 Varshas listed by Sanjaya in the Mahabharata,  which includes the bow shaped Bharatavarsha as  the southern most varsha (region) and the inverted bow shaped Airavata (Siberia) as the northern most Varsha of the dvipa (continent) resembling the shape of a rabbit (Eurasia) among the four continents known to Sanjaya.  One more rabbit shaped continent mentioned is North America and the two peepul tree shaped continents are South America and Africa.

The Nagas and Suparnas were mentioned as the two rival sibling tribes.  Two sisters Kadru and Vinata were their mothers.  This is  like the Aditya,  Daitya Danava sibling tribes born to the three sisters Aditi,  Diti and Danu.  Like the Adityas,  Daityas and Danavas,  the Nagas and Suparnas too spread throughout the world,  fighting and coexisting with each other, as per our Itihasa Puranas.

They carried their totem symbols like crowns depicting hood of a snake or  beak of a hawk,  snake symbols,  wings of birds,  feathers, etc. on their flags,  on their body or on their cloths or head gears. We can see them (either snake or the hawk) in the national flags and emblems of most of the countries even today!

The Chinese dragon mostly wingless, predominantly  represents the Nagas,   though distinction is blurred with some having very small to medium sized wings.  In contrast Indonesia is predominantly Suparna with the affinity to the Garuda symbol.  Most south east Asian countries have affinity towards Suparna symbols.

The US with its eagle symbol on its emblem and military,  lean to the Suparna consciousness,  as if infused with the Suparna consciousness of the lost indigenous tribes who lived in the America like the Mayans and other native Americans who during their golden days roamed around in their native land,  adorned their cloths,  headgear, hair and body with bird feathers and with many of their devatas resembling the terrible forms of Garuda!

Itihasa Puranas describe about Nagas and Suparnas living in far away lands. The Kamchaka peninsula of north east Russia is mentioned as ear shaped. In the Mahabharata, in Sanjaya’s geography, it corresponds to the ear of the rabbit shaped Eurasia continent. It is also mentioned as large region named Gokarna in some texts (not to be confused with the Gokarna village of Karnataka to the western shore). This was a favorite place of the Nagas and Suparnas. Similarly, they lived in Naga Dwipa and Shaka Dwipa identifiable islands like Japan and the Central Asian plains.

It is quite possible that Nagas and Suparnas, after their origins in Kashmir went north westward,  occupying Tibet,  Xinjiang,  Central Asia,  Siberia,  Kamchatka,  islands like Japan and finally crossed over to the Americas blending with the North American native cultures,  spreading the myths of divine birds and serpents in the form of dragons and other gods and goddesses with wings and serpentine forms. Another group of Nagas and Suparnas likely traced Brahamputra and Ganga up to north east and spread to Southeast Asia giving rise to Naga culture in places like Nagaland and Suparna culture in Southeast Asian countries like Malaysia,  Indonesia and other regions.

Vrtra is the most ancient entity with elements of being a primitive Naga / Dragon.  He is often depicted as a Naga,  a snake, a serpentine river or as frozen serpentine glacier / glacial river.

Indra is similarly one of the most ancient heroes,  ancestral to heroes like Rama and Arjuna.  You may be surprised to know,  in Ramayana, Rama is compared more to Indra than to Vishnu!

But for a superficial observer without the above information it will not be so clear.

In conclusion,  the dragon symbolism is inseparably fused with the Naga Suparna symbolism of Bharata.  The recent Indo China tensions and the worldwide tensions of the countries, with China on one side and others in opposition, seems like sparking the ancient Naga-Suparna rivalry.  It is to be seen how much of the Naga-Suparna conflicting energies will be sparked and clashed,  as more and more events unfold.