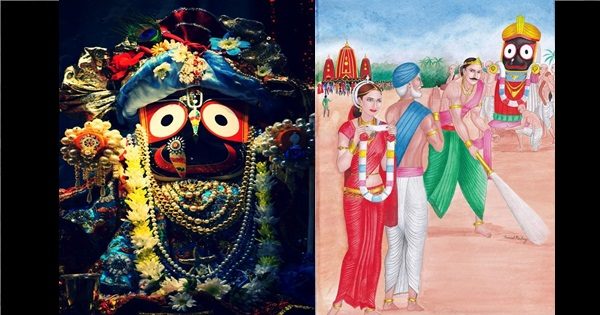 The corpses of 12 peasants were lying stiff on the floor. Three of them were hardly 16. This was the third time a border skirmish took place this month. Kalinga and Vijayanagara had a long war which was gradually taking its toll. The king Purushottam Deva was in unrest.

Purushottam Deva wasn’t ready to be the king. His father, the mighty Kapilendra Deva Routray was the general and adopted son of the last Ganga emperor Bhanu Deva. When the emperor had his last breath, Kapilendra knew that the feudal kingdom of Kalinga would fall to pieces due to the lack of proper leader during the dark times when Bahamanis, Vijayanagara empire and the Bengal Sultanate were bringing waves of attacks from all sides. Kapilendra ascended to the throne but considered himself the pradhan sevak or acting regent on the behalf of Lord Jagannath – the Lord of the Nila Shaila, the blue mountain. Kapilendra crushed the rebellion organized by the chiefs like the Matsyas who didn’t consider him the king. He gave a striking blow to the Bahamanis, the Bengal Sultanate, the Malwas and the Vijayanagara. He gained alliances in the form of the Vellama chiefs who would aid him against Vijayanagara. His eldest son, Hamvira Mahapatra was the true instrumental aspect in helping him to form a strong kingdom. Most people felt that Hamvira would be the next pradhan sevak of Jagannath.

However, Kapilendra Deva had other thoughts during his last days. While visiting Jagannath temple one day, he chose scholar Purushottam Deva as the king instead of the aggressive Hamvira. This tensed the situation between the brothers and a civil war broke out. However, either by muscle power, or by brotherly affection, matters didn’t remain bitter between the brothers, though the bond didn’t become as strong as the past. Though the matter was settled in non-orthodox mode, yet the civil war had taken a toll of a different kind.

During the battle of the brothers, Kanchi Naresh Salubha Narasimha Deva, the vassal of Vijaynagara and former arch nemesis of Kapilendra Deva, had made an attack and occupied some regions of the Kalinga empire. Regular skirmish was a common thing. Consulting with his old but wise minister, Purushottam Deva sorted out a peaceful plan of gaining his territory and ending the tensed relation with Kanchi. He sent a proposal – marriage of Kanchi princess, beauteous Padmavati with himself and the return of the lost territories of Kalinga.

But man thinks one thing, while naughty Gods script out something else. Due to a sudden sickness, Salubha Narasimha Deva couldn’t attend the Rath Yatra. Padmavati too, was unable to visit Puri. Kanchi Naresh sent his minister and other delegates to Puri along with various offerings and gifts.
On the day of Rath Yatra, Jagannath was adorned with grand clothes, flowers and various jeweleries. The mighty muscular Brahmin priests and the valiant Daitapatis brought out the grand pratimas of the trio – Jagannath, Balbhadra and Subhadra – out of the garbhagruha and carried them to the chariots. The king, being the pradhan sevak of the Lord of the blue mountain, carried out the ancient tradition of sweeping the dirt away from the path of Lord Jagannath with a broom. After the Gods were put inside their respective Rathas, Purushottam Deva sweeped the Raths of the Gods with the same broom. Seeing him cleaning the path with a broom, Kanchi delegates developed a sense of contempt for Purushottam Deva; though they didn’t express it. In Kalinga, being the pradhan sevaks, even the kings serve Jagannath like a servant. In Odia, Rauta means servant of God, and Rautaray means chief of the servants of God. Being a Rautaray, it was Gajapatis ritualistic duty of sweeping the path of Rathas. That is the unmatchable love for Kalia which the Kanchi delegates didn’t understand. After the event was over, they took leave from Purushottam Deva and returned to Kanchi.

“Maharaja, you won’t believe it if I say. We saw Purushottam brooming the streets and chariots like a sweeper. If a king behaves like that, then think how are his subjects” – Kanchi minister could only say this much when Kanchi Naresh asked about the grand Rath Yatra festival. The news shocked the king of Kanchi and he immediately sent a message to Puri. The message was short and simple- “I, the mighty Kanchi Naresh, don’t want to marry off my precious daughter with a Chandal sweeper like you”.

Purushottam Deva got enraged with the message. He sent a reply through the hands of the ambassador – Kalinga officially declared war against Kanchi. Salubha Narasimha Deva was overjoyed with the news, thinking of what humiliation could he force upon this inexperienced, unworthy Kalinga king. He set out for a challenge – the winner would take away the loser’s Ishta Deva. Means, if Purushottam Deva would lose, Kanchi Naresh would take away Lord Jagannath from Puri to Kanchi and would place him behind his Ishta Deva Ucchista Ganapati. If Purushottam Deva would win, he would take Ucchista Ganapati and put him behind Jagannath pratima. Purushottam Deva accepted the challenge out of rage and whim, but later realized that most of his army is deployed at various frontiers at borders. The army he currently had at the capital was much less compared to the Kanchi army. Anxious with the unknown probabilities, he prayed to Lord Jagannath to help him.

This section is where historical facts, Puranas, belief, folk tales and legends flow swiftly and mix up. On an auspicious day, Purushottam Deva and his army set out for Kanchi. It was during the summer and heat was taking a toll. While he was riding out through the nearby regions of Chillika, the largest salt water lagoon in Asia, he saw a milkmaid waving her hands toward him. He stopped his horse and asked the lady what’s the matter. The lady told him about two handsome young men in their mid 20s, who just rode away through this place an hour ago. They were riding a white and a black horse. They had drank her buttermilk and as they had no money, they gave her two finger rings and told her that they are the soldiers of the Kalinga army. The army, along with the king coming behind and the king would pay for her buttermilk if she would show him these rings.

On seeing the rings, Purushottam Deva was surprised beyond imagination. The rings belonged to Lord Jagannath and Lord Balabhadra. Does that mean……? Purushottam Deva paid her for the buttermilk, gave her various gifts and gifted her a village. Today, the village is known as Manikapatna- named after the milkmaid Manika.

Now, let’s get back to history again. The war of Kanchi was a fierce one. Ultimately, whether due to divine help or due to Purushottam Deva’s strategy or Kalinga army’s valour, Kanchi faced a shocking defeat.

Purushottam Deva took six things as the spoils of the battle:-
◆ The lost territories of Kalinga.
◆ The Ucchista Ganapati as the trophy of the bet.
◆ The pratimas of Maa Barunei & Maa Karunei, which were later installed at temples in Khurda.
◆ The pratima of Maa Tarini he gifted to his commander and friend’s son Govinda Bhanja who installed the deity at Ghatagaon, Keonjhar.
◆ Princess Padmavati as an insurance that Kanchi would not retaliate back.

Purushottam Deva returned to Puri. He constructed a new temple inside the Jagannath temple complex, just behind the Jagannath shrine. He installed the Ucchista Ganapati inside the temple and appointed priests to carry out daily rituals.

He made the borders and frontiers of the newly recovered territories and made strong administration there. As for Padmavati, he called his old and wise minister and said, “Her father called me a sweeper for serving Great Jagannath. Now I will show them how it feels to have a sweeper as son-in-law. Get a suitable sweeper and marry her off to him”.

Hearing the orders, Padmavati became heartbroken and tensed. With Purushottam Deva’s permission, the old minister took Padmavati to his residence and kept her like his daughter.

Slowly time went by. The next Rath Yatra arrived. The city of Puri was teeming with preparation for the festival. Citizens had brimmed themselves up for Rath Yatra.

On the day of the Rath Yatra, the pratimas were decorated with new dress, jeweleries, ornaments and flowers. The priests and Daitapatis were bringing out the partimas with much struggle. Purushottam Deva was sweeping the path of Jagannath when the old minister approached him.

“Maharaja, I have something to say”.

“But I am busy right now. Can’t we talk later?”

“Maharaja, you can talk while carrying out your task.”

“Maharaja, do you remember you have asked me to find a suitable sweeper for Padmavati?”

“Yes, I did. But didn’t you get anybody this whole year?”

“Well, I just got someone.”

“You, Rajan! Padmavati can never have any sweeper more suitable and worthy than you.”

Purushottam Deva smiled. In this whole year, his anger had calmed down. Moreover, Padmavati was looking so stunningly beautiful in that red saree and Odishi get-up.

They married that same day – on the auspicious day of Rath Yatra. Through the hands of the wise minister, Lord Jagannath played well to set out their marriage.

In Odisha, every family gives the first invitation to Lord Jagannath for any auspicious event or ceremony.